This article is about the French photographer and writer Nadar, for more people see Nadar (disambiguation) . 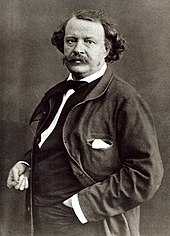 Portrait of Nadar, around 1860, probably taken by his brother Adrien

Caricature of Nadar by Honoré Daumier , 1869 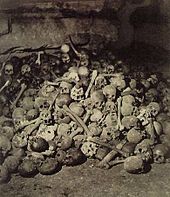 Nadar studied medicine in Lyon , but soon gave up his studies in order to work as a journalist. First he did this locally, later in Paris , where he returned in 1839. As a result, he also did drawing, worked in the theater and even in industry, and founded the Revue comique in 1849 . In 1854 he married Ernestine, an eighteen year old from Normandy. Despite his antics, the relationship appeared to have remained loving and lasting.

In 1854 Nadar opened a studio for photographic portraits in Paris. Unlike other commissioned photographers, he soon dropped accessories and painted backgrounds and did not retouch. The models stage his portraits by means of lighting, silhouette, concentration on eyes and hands. His aim was to capture the person psychologically, as it were. His customers - most of them were friends with him - included numerous writers such as Gérard de Nerval , Charles Baudelaire , Honoré de Balzac , Théophile Gautier and George Sand and artists such as Honoré Daumier , Gioachino Rossini and Sarah Bernhardt .

In 1859 Nadar took the first aerial photos from a balloon at the Battle of Solferino . With great confidence in airship travel, he constructed a screw airship himself and thus inspired Jules Verne to write his novel Five Weeks in a Ballon . Nadar repeatedly ascended in 1863 in the giant balloon called Le Géant , which carried him with great difficulty on the second trip from Paris to Hanover , where the balloon fell to the ground in a field near Neustadt am Rübenberge . Nadar and his wife were seriously injured and had to be treated in the hospital in Hanover. On this trip he took aerial photographs, which he explained methodically in Nouveau système de photographie aérostatique . He described his journeys in Mémoires du Géant, à terre et en l'air (1864) and in Le droit au vol (1865).

In 1863 the Société d'encouragement de la navigation aérienne au moyen du plus lourd que l'air was founded, with Nadar as president and Jules Verne as secretary. The aim of this society was to promote the construction of flying machines that were heavier than balloons but could be controlled.

Nadar's long exposures in the Paris catacombs and sewers have also become famous .

To support his painter friends, he organized the first exhibition of Impressionist painting in his studio in 1874 , including paintings by Claude Monet , Edgar Degas , Camille Pissarro , Paul Cézanne .

From 1895 to 1909 Nadar's studio was in Marseille, then again in Paris. In 1900 Nadar published his memoirs: Quand j'étais photographe . In 1909 Ernestine died after 55 years of marriage. He himself died in 1910 a few days before his 90th birthday. Nadar is buried in the Père Lachaise Cemetery (Avenue des Acacias, Division 36) in Paris .

After his death in 1911, his studio was continued by his son Paul Nadar (* 1856 in Paris, † 1939 in Paris). Nadar's negatives are now kept in the Caisse nationale des monuments historiques in Paris . His prints and his archive are in the French National Library . 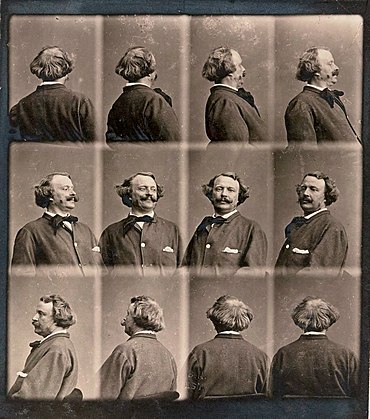 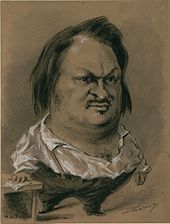 Three caricatures of Nadar by French writers for the series Les Binettes contemporaines (German for example: "The Visages of the Present") by Jean-Louis-Auguste Commerson (1854–1855):

The well-known French book price Prix ​​Nadar was named after him. In addition, the Tournachon Peak in Antarctica has had his real name since 1960.