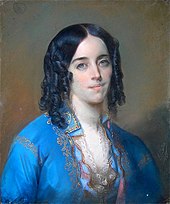 George Sand, on a pastel by Charles Louis Gratia , around 1835

George Sand , actually Amantine Aurore Lucile Dupin de Francueil (born July 1, 1804 in Paris , † June 8, 1876 in Nohant , Département Indre ), was a French writer who, in addition to novels, also numerous socially criticalPosts published. Through her way of life and her works, she campaigned for both feminist and socially critical goals. For example, she rebelled against the restrictions imposed on women in the 19th century by marriage as an institution, and elsewhere called for the equal participation of all classes in social goods. George Sand often aroused polarizing reactions among contemporaries and later thinkers. So it was by Friedrich Nietzsche called "milk cow with beautiful style," while for André Maurois "was the voice of women in a time when the woman was silent."

George Sand came from the Saxon Elector and Polish King August the Strong and the Altmark Countess Maria Aurora of Königsmarck from. Their illegitimate son, Moritz von Sachsen , was in French service as Field Marshal General. He had an illegitimate daughter who, after her father's death in 1750, was legitimized as Marie-Aurore de Saxe (1748-1821). In 1776 she was the second wife of George Sand's grandfather Charles Louis Dupin de Francueil (1716-1780). From this connection her father Maurice François Dupin (1778-1808) emerged, who was a colonel in the Napoleonic army. He married her mother, Sophie Victoire Delaborde, a milliner , a month before the birth of little Amantine Aurore Lucile . Both parents already had an illegitimate child.

Aurore Dupin at the age of six

At the age of four, George Sand lost her father, who had taken part in Napoleon's campaigns as a colonel, during a stay at the country estate of her grandmother Marie Aurore de Saxe, Madame Dupin de Francueil, in Nohant. Since mother and grandmother did not get along, the mother left little Aurore with her grandmother in 1810. She grew up in Nohant, brought up according to strict etiquette. At the age of 13 she was educated in an Augustinian monastery in Paris. From there she returned to Nohant shortly before her grandmother died. She inherited the estate and the Hôtel de Narbonne, a patrician house in Paris. She was neglected by her mother even after her grandmother died.

In 1822, against her mother's wishes, she married the destitute lieutenant Casimir Dudevant , illegitimate son of a baron. The marriage resulted in two children, Maurice (* 1823) and Solange (* 1828). The fatherhood of the daughter is controversial, since Sand had several affairs from 1827. In 1831 she separated from her husband. The separation was preceded by the accidental discovery of a will in her husband's secretary, which Dudevant had addressed to her. George Sand was unable to match the inscription on the bundle, “Only open after my death”; she was sure she had a right to know what her best-health husband thought of her. According to Sand's statements, the content of the will was a series of disregards and curses concerning her person, which led to violent arguments between the couple. The divorce took place in 1836. George Sand received Nohant and custody of her daughter Solange, her ex-husband the right to use the Paris town house and custody of their son Maurice, who either lived in boarding school or with his mother.

In 1831 George Sand began her work at Figaro in collaboration with her lover Jules Sandeau , in which her first novel Rose et Blanche (published 1831) was written. From the common pseudonym J. Sand she derived her stage name George Sand , under which she wrote her own articles and in 1832 published her first independent novel Indiana . The connection between the choice of this name and the Kotzebue murderer Karl Ludwig Sand, which is sometimes constructed, is incorrect. In her autobiographical writings, she distanced herself from its violent fanaticism; But she was aware that the identity of names had boosted her popularity in Germany. With the man's name she also took on the habit of speaking of herself in the masculine form and wearing men's clothing. Through the scandalous novel Indiana and even more through his second successor Lélia (1833), George Sand became known in France and beyond. Soon she was one of the best-paid writers of her time. Many of her works were translated soon after they were published. 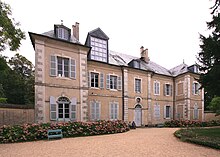 In 1833, George Sand began a passionate love affair with Alfred de Musset . The difficulties in the relationship because of Sand's unchecked labor frenzy emerged early on. Musset complained in late 1833:

“I worked all day. In the evening I had made ten verses and drank a bottle of brandy; she drank a liter of milk and wrote half a book. "

A trip to Venice did not improve the situation; When Musset fell ill, Sand and the doctor who was in charge of Musset, Pietro Pagello, fell in love and began a love affair in February 1834. The relationship with Musset was effectively ended; nevertheless both wrote long and downright desperate letters. The correspondence ended in 1835.

George Sand's residence in Paris and her country house in Nohant-Vic ( Maison de George Sand ) were popular with numerous artists. The circle of friends of the idiosyncratic, cigar smoking writer included writers such as Honoré de Balzac and Alexandre Dumas and others. a. the painter Eugène Delacroix , the composer Franz Liszt and his lover Countess Marie d'Agoult . One of her alleged lovers was the actress Marie Dorval . 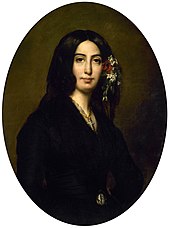 Through Franz Liszt, Sand met the composer Frédéric Chopin , with whom she began a love affair in 1838. Chopin, who at first only had an aversion to the emancipated Sand, was in an emotional crisis at the time and felt himself understood by the music-loving, enthusiastic Sand.

In November 1838 George Sand moved to Mallorca with their children Maurice and Solange . The decision was based on medical advice, as an improvement in the health of Maurice, who was plagued by a rheumatic disease, was expected . But Chopin, who suffered from tuberculosis all his life , also hoped for an alleviation of his suffering through a milder climate and joined the family. Maurice visibly recovered. For Chopin, however, the stay in the Valldemossa Charterhouse was not a good star. The premises were too cold; And in addition to the unfriendly weather, the Mallorcans remained very distant from the unmarried couple. Right from the start he developed all the signs of pneumonia , as George Sand later complained in writing. After 98 days, Chopin and Sand left the island again in February 1839. Both Chopin and George Sand had been severely affected by their time there. Sand wrote the travelogue A Winter in Mallorca ( Un Hiver à Majorque ).

The relationship between Chopin and George Sand ended in 1847. The reason for this is not clearly understood. Neither Chopin nor George Sand commented on their separation. It is known that George Sand was very conflict-prone at the time. The fact that her daughter Solange had developed a love affair with the penniless sculptor Auguste Clésinger triggered family disputes, in the course of which it is said that there were fights between the son Maurice and Clésinger or the mother who jumped at the son. There are different versions of details by George Sand and Solange. Chopin, snubbed by the news that Solange was secretly engaged, nevertheless maintained his friendship with her, which was an affront to George Sand.

In the 1840s, George Sand turned to the social problems of France in her novels and the articles she wrote regularly for various newspapers since the beginning of her writing career. In 1841 she founded the socialist revue indépendante with Pierre Leroux . She used his “social gospel” as a guide when choosing her subjects. In addition to socially relevant issues, she took up his questions of religion criticism in Spiridion (1839). In particular, the monumental double novel Consuelo / La Comtesse de Rudolstadt (1842/1844), published as a serial in the Revue indépendante , depicts a utopian society without distinctions between sexes and classes.

In 1848 she welcomed the February Revolution . She moved to Paris and took over responsibility for the Bulletin de la Republique , the official organ of the new government. When Louis Napoléon Bonaparte , who had met her in 1838, was elected President, she was enthusiastic. In 1852 she was able to use the good relationship to successfully plead for the lives of four convicted socialists. After Louis Napoléon was crowned emperor, she returned to Nohant disappointed. Due to the increased censorship, she destroyed political writings and used more harmless topics for her novels.

George Sand - daguerreotype from 1864 by Nadar

Until his death in 1865, the engraver Alexandre Manceau (1817–1865) was George Sand's partner for 15 years. This relationship led to an argument with the son at times.

The two daughters of Solange, who had divorced Auguste Clésinger in 1854, and a son of Maurice died prematurely, which deeply affected George Sand. For Maurice's two daughters (the younger was Aurore and died in 1961 at the age of 95), George Sand was a loving grandmother who wrote fairy tales for the girls (including: You are a fairy, Madame ).

For the last ten years of her life, Sand was closely connected to the writer Gustave Flaubert , which was expressed in numerous personal contacts and letters.

George Sand died at her country estate in Nohant in the French department of Indre at the age of almost 72. Her remains were buried there in their own park.

Some of their property is kept in the Parisian " Musée de la Vie romantique ".

George Sand was considered a "prolific writer". She published around 180 volumes, as well as numerous socially critical articles for magazines. There are also approximately 40,000 letters, of which around 15,000 are said to have been preserved. Her works and her way of working have won her admirers and despisers alike. Charles Baudelaire scolded it a "latrine", Friedrich Nietzsche described it as a "fertile writing cow that had something German in the worst sense about it". The anecdote circulated among the less disapproving critics that, as soon as she had finished a novel, Sand immediately picked up a new pile of paper to begin the next. In addition to Musset, Balzac and Flaubert, her admirers also included Heinrich Heine and many Russian writers, including Fyodor Dostoyevsky .

Her novel Consuelo was the basis for two operas of the same name by Alfonso Rendano (1888) and Giacomo Orefice (1895).

Drawing on her childhood experience of rural life, she wrote the novels from the rural milieu: