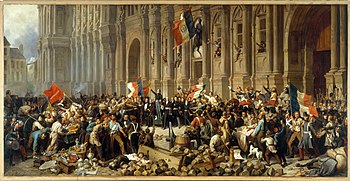 The bourgeois-democratic February revolution in France of 1848 ended the rule of the originally rather liberal "citizen king" Louis-Philippe of Orléans on February 24, 1848 and led to the proclamation of the Second French Republic . At its head, in the further course of the revolution , after the suppressed social revolutionary uprising in June, the nephew of the former emperor Napoleon Bonaparte , Louis Napoléon Bonaparte , was elected president on December 10, 1848 .

The events of the February Revolution formed the spark for the subsequent March Revolution in other regions of Central Europe , especially in the states of the German Confederation , while France's role in the Swiss Sonderbund War of 1847 had itself promoted the domestic political ferment. These revolutions had, at least initially, a pan-European dimension with the commonality of bourgeois - liberal objectives (cf. bourgeois revolution ). Seen in context, including the February Revolution, they can be described more generally as " Revolution (s) of 1848/1849 ", even if they developed their own national to nationalist developments in the individual countries . 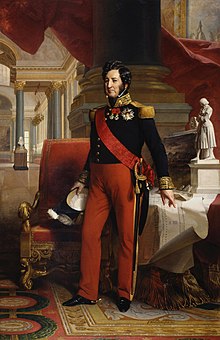 Louis-Philippe came to power in 1830 through a revolution that was already bourgeois-liberally motivated at the time ( July Revolution of 1830 ), in which the reactionary regime of the Bourbons under Charles X had been overthrown. Louis-Philippe's reign from 1830 to 1848 - the so-called July Monarchy - was marked by an increasing turn away from liberalism , increasing scandals and cases of corruption , until he finally joined the Austrian- dominated " Holy Alliance ", which was determined by the extremely reactionary politics the restoration of the Austrian State Chancellor Prince von Metternich . Since the Congress of Vienna in 1815, its goal has been to restore the conditions in Europe as they had prevailed before the French Revolution of 1789, that is, domination of the nobility and recapture of their privileges .

The French bourgeoisie were visibly disappointed in the policies of the king, who had been brought to power by the bourgeoisie themselves. Above all, the census suffrage , which prevented the bourgeoisie from having an influence on legislation commensurate with its strength, increased the anger against the king.

Dissatisfaction also fermented in the working class and a revolutionary mood developed out of the problematic social situation, which had been exacerbated by an agricultural and trade crisis in 1847.

Contemporary caricature of the overthrow of Louis Philippe: A republican revolutionary kicks the deposed king across the English Channel to England and shouts to him: "Get hung up somewhere else!"

After the king had banned a planned banquet to reform the electoral law, public protests broke out in Paris on February 21, 1848 , which quickly escalated into unrest and assumed a revolutionary development. There was a temporary union of workers and citizens. On February 23 and 24, 1848, fierce street and barricade fighting ensued between the insurgents and the royal troops. On February 24, 1848, the hated upper-class Prime Minister François Guizot was forced to resign. Shortly afterwards, King Louis Philippe himself abdicated and fled into exile in England . A provisional government was then set up under the liberal politician Alphonse de Lamartine and the republic was proclaimed.

The young, second French republic celebrates the "Festival of Concord" (Fête de la Concorde) on May 21, 1848

The first revolutionary government was an extremely heterogeneous eleven-member council of ministers , in which representatives of the left (such as the well-known journalist and reform-minded socialist Louis Blanc ), the liberals and democrats (such as Foreign Minister Lamartine) and the conservative right were represented. They tried to combine and balance the sometimes conflicting interests of the revolutionary forces. Conservative in foreign policy and moderately reform-oriented in domestic policy , this government made a number of important decisions: for example the abolition of slavery in the colonies, the abolition of the death penalty for political crimes , the introduction of freedom of the press and universal suffrage, and the recognition of the right to work .

Because of the tense situation in the population, in which the different social, political and economic interests soon allowed the bourgeoisie and the working class to drift apart again, this first government of the revolution was only able to last a few months. 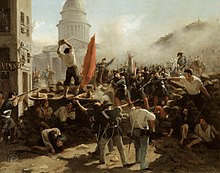 Barricades against the Lamoricières troops on Rue Saint-Maur before the attack on June 25th. One of the very few daguerreotypes from the European Revolution of 1848/49.

On April 23, 1848, the election for a constituent national assembly was carried out; with it the left was defeated , while the conservatives and moderate liberals emerged victorious from it.

From June 22nd to 26th, 1848 there was a renewed uprising of the working class (French: Journées de Juin ) on the occasion of the closure of the French national workshops , which had opened up job opportunities for many unemployed. However, the June uprising in Paris was soon bloodily suppressed by units of the French army and the National Guard (commanded by Louis-Eugène Cavaignac ). Around 1,500 men died, including three generals. The number of workers killed is estimated at 5,000 (of which around 1,500 were shot without trial). 25,000 people were arrested; 11,000 were exiled to prison or deportation to one of the overseas colonies, several thousand of them to Algeria. Louis Blanc, who himself had not taken part in the workers' uprising but had campaigned for the preservation of the national workshops, was able to flee into exile in England; he did not return to France until 1870.

The suppression of the June uprising in Paris sparked the reactionary counterrevolution - not only in France but also in the other European countries where the March Revolution had spread. Historically, the June uprising also marked the split or split of the revolutionary proletariat from the bourgeoisie . This splitting of the bourgeois revolutionary forces had been foreseen by Karl Marx and other socialists and was viewed by them as a historical necessity for the revolutionary class struggle that was to lead in the long term to communism as a classless society . 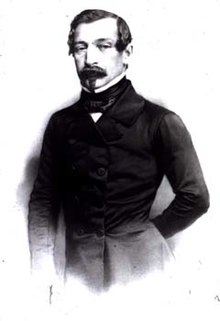 On November 4, 1848, the National Assembly passed a constitution which also provided for the election of a president . The nephew of Napoleon Bonaparte, Louis Napoléon, who had returned from exile and who had already tried unsuccessful coups against Louis-Philippe in 1836 and 1840 , was elected as the new French President on December 10, 1848 with an overwhelming majority of 75% of the votes.

However, the republic only lasted three years. Louis Napoléon used this time to prepare the coup d'état of December 2, 1851 for a long time . After cleverly playing off the monarchists and republicans, he finally founded the second French empire when he himself became Emperor Napoleon III a year after a successful coup in which he was granted dictatorial powers . explained.