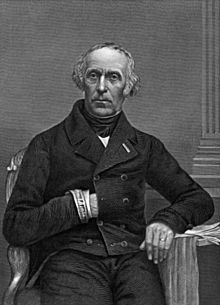 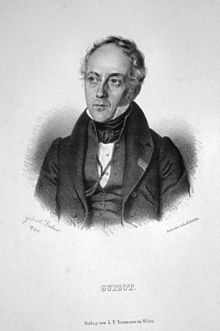 François Guizot was the son of Calvinist parents. His paternal grandfather was a pastor of the Church of the Desert . His father, who was a lawyer, died under the guillotine on April 8, 1794 during the French Revolution . Guizot went to Geneva with his mother , where he attended high school and learned German, Italian and English. From 1805 he studied law in Paris and in 1807 took a position as tutor for the former Swiss minister and envoy Philipp Albert Stapfer . In 1812 he married the French writer Pauline de Meulan, who was 14 years his senior, and was appointed professor of modern history at the Faculté des Beaux-Arts in Paris by the Marquis Louis de Fontanes . In 1819 the couple had their son François, who died of tuberculosis in 1837 . After his first wife died in 1827, Guizot married her niece Elisa Dillon in 1828. The second marriage resulted in two daughters, Henriette and Pauline, and a son named Guillaume, whose mother died in 1833. Guizot spent the rest of his life as a widower. Until her death in 1848 during Guizot's exile, his mother played a major role in the family household.

From 1809 he published political memoranda and scientific treatises. After the Restoration , he was appointed General Secretary by the Minister of the Interior, Abbé Montesquiou , in 1814 , sat on the censorship committee and helped draft the new, strict press law. After Napoleon's return from Elba, he went to Ghent to the court of Louis XVIII. He responded to the accusations made against him in parliament in 1843 by pointing out that this was only done to persuade King Ludwig to adopt a constitutional regime. After the second Restoration, he was appointed Secretary General in the Ministry of Justice. As early as 1816, however, he resigned together with the Justice Minister François Barbé-Marbois in protest against the restorative and emphatically Catholic course of the French parliament at the time, which was mockingly called Chambre introuvable . Soon afterwards he was promoted from the king to master of requets and councilor of state. In this position he founded, together with Decazes , Royer-Collard and his other political friends, the doctrinal party , who saw themselves as members of the Juste milieu and as defenders of the moderate monarchical system against radical political currents.

As a result of his memorandum on the state of the chambers, he became director general of local and departmental administration in the Ministry of the Interior in early 1819 . When Decazes had to resign in 1820, Guizot was also fired and lost his position as censor. The government wanted his dismissal to be understood as a warning to Guizot's political friends, who vehemently opposed the change in electoral law: In order to give the government more stability, the partial renewal of one seventh of the members of parliament, which had been in effect annually, should be replaced by the one that still applies today full new parliamentary elections after the end of a legislative period.

Guizot resumed a job as a teacher of modern history at the Faculté des lettres . On the side he worked at a school until 1822. In 1824 he was banned from lecturing as a result of his attacks on the cabinet of Prime Minister Jean-Baptiste de Villèle . It was not until 1828 under Martignac that he could take it up again. From this time he fought openly against the government of Charles X. He was initially a member and later president of the society Aide-toi et le ciel t'aidera , which was founded to protect independence from elections. At the same time he was still active as a writer. In addition to political writings, at that time he provided many works by others with introductions or comments (for example Letourneur 's Shakespeare translation). In 1826 Guizot took over the direction of the Encyclopédie progressive . However, this venture quickly stalled. In 1828 he founded the Revue française , which was interrupted by the July Revolution and only resumed for a short time in 1837.

In March 1829 Guizot was again extraordinary councilor, in January 1830 he was elected with 281 votes (563 voters, 446 voters) for the city of Lisieux in the Chamber of Deputies , where he belonged to the left center. His real statesmanship only began with the July Revolution. It was he who wrote the protest against the July orderly and thus gave the first impetus for the outbreak of the revolution. On July 30th he became Provisional Minister for Public Education and on August 11th Louis-Philippe I appointed him Minister of the Interior. However, since he did not approve of the policies of Prime Minister Jacques Laffitte , he and the other doctrinalists were dismissed in November 1830 .

When Casimir Pierre Périer became Minister of the Interior in 1831, Guizot supported him as leader of the constitutional monarchists. After Périer's death, he rejoined the cabinet on October 11, 1832, as Minister for Public Education. He improved the school system: Although the law of June 28, 1833 did not contain compulsory schooling , every community was obliged to maintain at least one simple school, and in the event of failure it was supported by the state. In addition, there should be at least one secondary school in every departmental capital as well as in other places with more than 6,000 inhabitants. Furthermore, the law regulated the organization of school authorities, the establishment of teacher training seminars and the minimum income of teachers. Guizot also arranged for the restoration of the 5th class of the Institute of the Academy of Moral and Political Sciences, which Napoleon had repealed in 1803. With a brief interruption, he remained Minister of Education until April 15, 1837, when the King appointed a cabinet that was even more obedient to his personal will than before.

Allied with Odilon Barrot and Adolphe Thiers , Guizot then intrigued against the Molé - Montalivet government until it fell after the opposition won the elections in 1839. But Guizot was not appointed to the new cabinet, which was formed under the nominal chairmanship of Marshal Soult , but actually under the personal direction of the king, but was sent to Horace-François Sébastiani's position as envoy to London, where he signed the treaty directed against France's oriental policy of the four great powers of July 15, 1840, which ended the crisis in the Orient without taking French interests into account. On October 28, 1840, after Thiers' resignation, he took over the post of Foreign Minister in the new Soult government. In this function he ended the Rhine crisis and concluded the Dardanelles Treaty in 1841 , which settled the strait issue by mutual agreement with the other great powers. He became one of the strongest figures in the cabinet and, after Soult's resignation in September 1847, also Prime Minister.

Guizot remained in this position until the February Revolution of 1848 . He represented the politics of the bourgeois king both internally and externally and made a considerable contribution to the fact that the constitutional monarchy fell into disrepute and ultimately fell. He suppressed critical opinions and reform calls from the population, especially in the area of ​​the right to vote. In the census suffrage in force at the time , the income hurdles were set so high that only around 2% of the population had the right to vote and only around 0.3% had the right to stand. Instead of lowering the barriers, Guizot advised the residents of Enrichissez-vous (Eng. "Enrich yourselves!") In order to obtain the right to vote. This saying, the origin of which is unclear, was placed in different contexts by political historiography and understood as the cynical creed of the July monarchy .

In foreign policy, he led to estrangement from England through the intrigues that the king had instigated in the Spanish marriages and, through the support of the Jesuits in Switzerland , aroused the dissatisfaction of the liberals. He stubbornly rejected the electoral reform, thereby provoking the movement of 1848, which, because of its general unpopularity, was initially directed against him. On February 16, he submitted his dismissal, which the king did not accept; on February 24, 1848 he had to flee Paris and was charged by the Provisional Government, but acquitted in November by the Paris Court. He had lived in London since March 1848 and from here issued an election manifesto in April 1849, in which he offered his services to the voters in France, albeit in vain.

After he returned to Paris in November 1849, he worked here for a merger of the warring supporters of the Bourbons and the Orléans. With the coup d'état of December 2, 1851, this activity came to an end and prompted him to return to England. He later returned to his homeland to resume his literary studies and in January 1854 became President of the Paris Academy of Moral and Political Sciences. In 1855 he was elected to the American Academy of Arts and Sciences . For the last time he appeared publicly at the plebiscite in 1870 , when he recommended the affirmative vote in a letter. He also played an important, but secret and ultimately unsuccessful, part in the merger negotiations in 1873. The monarchists adhering to the Orleans recognized the prerogative of the Bourbons on the throne of France, but due to the intransigence of the pretender Henri d'Artois (also known as the Count of Chambord ), the planned restoration had no prospect of success.

Under Guizot's influence, the Synod of the Protestant Church of France decided in 1874 to expel liberal Protestants. When he got into an argument with the Bonapartists, they gave him the pain of publishing that Guizot's son was killed by Napoleon III in 1855 . accepted a gift of 50,000 francs. Guizot sold a picture in order to repay the sum to the Empress Eugenie , but it was not accepted.

Guizot died on September 12, 1874 at the age of 86 on his Val-Richer estate near Lisieux in Normandy and was buried in the Val Richer cemetery in Saint-Ouen-les-Pin.

As much as his ministerial work has been subject to attack, his literary achievements have found ready recognition on all sides. By founding the Comités historiques , by encouraging the publication of important collections of sources as well as by his own numerous writings, he made great contributions to the promotion of historical studies in France. If his historical works suffer from teleological- pragmatic doctrinalism, the great art of composition and representation is undisputed, and Guizot must be counted, if not one of the great statesmen, at least one of the first writers in France. On behalf of the government of the United States of North America, he edited the history of Washington based on the papers left behind in Vie, correspondance et écrits de Washington (1839–40, 6 vols.), For which his portrait was placed in the boardroom of the House of Representatives in Washington DC .

Caricature of Guizot by Honoré Daumier

In addition to Klemens Wenzel Lothar von Metternich , he was named in the foreword to the Communist Manifesto as an enemy of communism. The French satirist, painter and draftsman Honoré Daumier , an opponent of the July monarchy and its censorship efforts, made drawings caricaturing von Guizot and, in 1833, a clay bust.

The botanist Henri Cassini named in 1829 in his honor, the plant genus Guizotia ( Guizotia abyssinica ) from the family of Asteraceae . Prussia also honored Guizot: on January 24, 1849, he was accepted as a foreign member of the order Pour le Mérite for science and the arts.