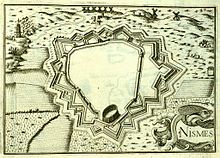 The fortifications of Nîmes in 1634. Engraving by Christophe Tassin

Nîmes is an old Roman city not far from the Pont du Gard - a huge aqueduct from the 1st century AD.

The name of the jeans fabric Denim is derived from de Nîmes "from Nîmes".

Nîmes was called Nemausus by the Celts (name of the local Celtic spring deity) and was the capital of the Volcae Arecomici . It was in the area of ​​influence of Massilia (today's Marseille ). 121 BC It was conquered by the Romans and part of the province of Gallia Narbonensis , then in 27 BC. Elevated to Colonia by Emperor Augustus ( Colonia Augusta Nemausus ). Around this time, Egyptian Greeks, probably from the army of Mark Antony , settled here . In 149 AD, Nemausus was probably the new capital of the Narbonensis after the fire of Narbo (today's Narbonne ). The city was prosperous at least until the end of the 2nd century AD. It was densely populated, brilliantly built, and an example of the heyday of Gallo-Roman culture. In its oldest parts from the 3rd century BC. The Tour Magne ("Great Tower"), which dates back to the present day and is still in existence today, was made part of the seven-kilometer city fortification by the Romans. The city, conveniently located on the Via Domitia , had an important mint and at that time had around 25,000 inhabitants. Preserved monuments such as the amphitheater , the castellum , the Temple of Diana , the Pont du Gard aqueduct northeast of the city, the Maison Carrée and the Augustus Gate testify to its position at that time .

Nîmes, where a synod was held in 396 , became a bishopric in the late late antiquity ; For the first time a bishop is attested here for the year 506. In 472 the city was conquered by the Visigoths , who were able to defend Septimania against the Franks for a long time. In 725 the Saracens conquered Nîmes, but in 737 it was captured by the Franks under the leadership of Karl Martell and almost completely destroyed. Shortly won back by the Saracens, the city fell into the hands of Pippin the Younger in 752 . After Nîmes came to the Frankish Empire, the vicecomites (French vicomtes ), who were under the dukes of Septimania , ruled there . In the 10th century they made themselves independent and since then have carried the title Count. The city ​​was sacked by the Normans in 859. Repeatedly a bone of contention between the Counts of Toulouse , Carcassonne and Béziers as well as the King of Aragon , Nîmes was completely taken over by the latter as overlord. In 1226 it was conquered by King Louis VIII of France . In 1259, it formally passed to James I of Aragon to Louis IX. from. During the Hundred Years War , the city was conquered by the Duke of Anjou in 1378, by the English in 1417 and by the Dauphin Charles VII in 1420 .

In the 16th century, Nîmes was one of the capitals of the Huguenots , who, despite all the persecution and oppression, held their own there in relatively large numbers and even set up a Protestant university at the instigation of the Marguerite of Navarre . Despite all attempts at reconciliation, there has since been a sharp contrast between the Catholic and Protestant residents. This often led to bloody fights. In the times of reaction, after the revocation of the Edict of Nantes (1685) and during the Cevennes War (1702–05), the Protestants were persecuted . In the course of the fighting, the city's cathedral was destroyed several times. The religious conflicts escalated and in 1791 and 1815 were the restoration of the Bourbons after the hundred days of Napoleon Bonaparte also here to great horrors occasion. In August and September of this year the Catholics persecuted the Protestant inhabitants with murder and fire through the "Bandes Verdets" under a certain Dupont, called Trastaillon; only repeated attempts by the Duke of Angoulême ended this confusion. At the end of August 1830, after the July Revolution, the fanatical Catholic party for Charles X rose up and caused much turmoil, but was suppressed. In 1835, cholera raged in Nîmes.

Nevertheless, the city experienced a steady economic boom, especially since the emergence of manufacture in the 18th century, which was mainly used in textile production . In addition, the turned wine to be profitable, especially after the connection to the railway network and the construction of the Canal du Midi was able to sell the products better.

During the Second World War , the city was occupied by the Germans from 1942 to 1944 without suffering major war damage. In Nîmes there was a special feature of the liberation from the Germans: at the head of the parade to celebrate the liberation by the Resistance troops, three Germans ran who had fought with weapons in the Maquis , in the Cevennes, alongside France. The location of the 2nd REI ( 2nd Regiment Entrangere de Infanterie , German: 2nd Foreign Infantry Regiment ) of the French Foreign Legion is located in Nimes .

Description: On red a green palm tree standing on a green shield base with a green crocodile tied to a gold chain and turning to the left . On the right side of the palm hangs a golden wreath and on its sides the golden capital letters COL and NEM .

Symbolism: The chained crocodile comes from a coin motif from around 27 BC. It is said to have been brought into the city by Egyptian slaves at that time. The letters mean Colonia Nemausiensis. Colonia meant an upgrading of the city at the time of Emperor Augustus . Today the coat of arms can be found on many public objects, such as street bollards . In the town hall of Aufganges crocodiles hanging from the ceiling.

The interior of the amphitheater

The city's main attractions are the numerous buildings from Roman times - including the amphitheater and the Maison Carrée - as well as the cathedral and the picturesque historic city center . In the center of the city are the arenas that were built at the end of the 1st century AD. The amphitheater measures 133 m in length and 101 m in width and offers space for over 20,000 spectators. The 21 meter high facade consists of two superimposed rows of 60 arches each. The amphitheater is still used for events today. Especially during the Ferias, bloodless bullfights take place there three times a year , the so-called "courses libres" . In the ferias before Pentecost , however, many bulls are killed every evening in the corrida, which is staged according to the Spanish pattern.

The Maison Carree called temple was at the beginning of the 1st century. Chr. Built and dominated in the ancient times , the Forum of the city. It was consecrated to Gaius and Lucius Caesar , the grandchildren and adoptive sons of the Emperor Augustus .

The Porte d'Auguste marked with their preserved arches the place where the Via Domitia led from the east to the city.

The modern Carré d'Art , located opposite the Maison Carrée, was designed by the architect Norman Foster and contains a library and a museum of modern art.

The Jardins de la Fontaine were laid out by Maréschal and Dardailhon in the 18th century. The old Diana temple was also integrated into the French park landscape, as was the Celtic Tour Magne, which is 32 meters high and serves as a viewing tower.

The Castellum is a Roman water fort that caught and passed on the water that was led into the city via the Pont du Gard. It has a diameter of 5.90 meters.

The Musée de Beaux-Arts was built in 1907 and redesigned by Jean-Michel Wilmotte in 1986/87. French, Dutch and Italian paintings from the 16th and 17th centuries are on display.

The Musée du Vieux Nîmes is located in the old 17th century Bishop's Palace. The history of the city since the end of the Middle Ages is shown.

The Musée des Cultures Taurines was inaugurated in 2002 and deals with regional culture, particularly bullfighting.

The Musée de la Romanité is a new building opened in 2018 right next to the amphitheater. According to the architect Elizabeth de Portzamparc, the modern curved glass facade is reminiscent of a Roman toga. The archaeological museum has a collection that extends from the Bronze Age to the Middle Ages, with a focus on the Roman era; the collection of Roman mosaics, for example, is worth seeing. The roof terrace offers a panoramic view of Nîmes. The former Archaeological Museum (Musée Archéologique de Nîmes) in the former Jesuit school was closed with the opening.

Nîmes is on the A9 ( Orange - Perpignan ) and A54 (Nîmes- Arles ) motorways . There is a railway connection on the main line from Montpellier to Avignon or Arles, as well as secondary connections to Le Grau-du-Roi on the Mediterranean and to Alès . Nîmes-Garons Airport is located south of the city, and there is also a small airport in the northeast, near Courbessac.

Municipalities in the Arrondissement of Nîmes