A slightly modified concept of population density is settlement density . It describes the number of inhabitants per square kilometer of settlement and traffic area.

The reciprocal of the population density is the areal figure . It describes the area that is available to each inhabitant on average.

The country with the

The population density varies greatly within the area of ​​a country. The highest population densities are found in cities , and often you can find many times higher population densities in individual city districts. For example, Macau (today the Special Administrative Region of the People's Republic of China ) already has a very high density of 19,851 inhabitants / km² (December 31, 2017, estimate). The Santo António district within Macau, however, has a much higher one: here there are almost 124,727 inhabitants per square kilometer.

The Kowloon Walled City on the Kowloon Peninsula, a district in Hong Kong that was demolished in 1993, has probably the highest population density ever achieved in the world . About 33,000 people lived here on just 0.026 km², which corresponds to a world record population density of 1,300,000 inhabitants / km². That is only 0.8 m² per inhabitant . In Europe, Paris has a very high population density with 21,289 inhabitants / km² (January 1, 2012); the 11th arrondissement (Popincourt) has the highest density of Paris with 42,236 inhabitants / km² (January 1, 2012). The most densely populated district in Europe is located in the Spanish city of L'Hospitalet de Llobregat , where around 77,000 people live in one square kilometer in the Florida district.

The most densely populated city in North America is Guttenberg in the US state of New Jersey with 22,352 inhabitants / km² (2010). The urban area on the Hudson River across from Manhattan comprises only a narrow strip of waterfront, on which about 11,000 people live. 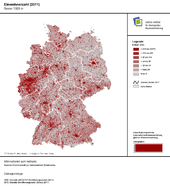 The IOER Monitor map shows the relatively uneven population density in Germany for 2011.

Munich owes its top position to the very narrow city ​​limits ; Due to the port and larger rural areas, Hamburg has large areas on which very few people live, which lowers the average population density.

The Munich district Schwabing-West has a population density of 15,646, the Berlin district Friedenau 16,785, the Friedrichstadt district in Düsseldorf has 19,984 (as of December 2016) and the Hamburg district Eimsbüttel has 17,982 inhabitants / km². Probably by far the most densely populated district in Germany is the Westend in Wiesbaden , which - purely arithmetically - has more than 27,000 inhabitants per square kilometer. In reality, only 18,161 people live there on an area of ​​0.67 km².

The most sparsely populated municipality in Germany is Wiedenborstel in Schleswig-Holstein , with 11 inhabitants on 4.52 km². The population density is therefore 2.4 inhabitants / km². This community consists of one estate, embedded in a forest area.

The grid-based representation of population density published by the Monitor of Settlement and Open Space Development (IOER Monitor) shows, like the map of population density on a district basis, a clear east-west divide with regard to the settlement structure. This gap is primarily the result of the increased settlement in West Germany after the end of the Second World War and the emigration from the East German federal states after reunification. While the population density map can only be condensed down to the district level, the grid map based on the 2011 census (Destatis) allows for a more precise localization of population concentrations and the identification of further spatial patterns. A representation of the new "bacon belt" around Berlin, for example, is possible in much more detail using the grid representation.

The five major Austrian cities (more than 100,000 inhabitants) are ranked according to population density (people / km²) as follows, with secondary residences included:

The most densely populated district of Vienna is Margareten , where 55,640 people live on 2.03 square kilometers - that is 27,409 per km². In second place is Josefstadt , which with 23,543 inhabitants per square kilometer also reaches a value of over 20,000.

Population density in Switzerland by cantons

The six major Swiss cities are ranked according to population density as follows:

Population density on earth 2005
Copy of this map "freely movable" in large format (1.1 MB) with a legend that is visible at the same time

The informative value of the population density value is often considered to be low, since it represents an average figure for an arbitrarily determined area. It does not provide any information about the different population densities due to geographical features, such as B. uninhabitable areas. For countries with a high proportion of deserts or mountains, such as Egypt , Saudi Arabia or the People's Republic of China and Mongolia , the number can therefore be misleading when compared to other countries. In this case, more precise would be the population density , which only refers to the theoretically or actually populated area.

This restriction also applies to cities: The population density of a city or municipality related to the district area depends very much on how large the proportion of unpopulated areas is: Large forest and arable areas in the area of ​​the district reduce the average population density; the residents of the city districts can live quite densely packed.

Most world maps of population density are based on statistical information for country-specific units of area. These can be very small areas such as the districts and cities of Germany or very large ones such as entire states (see map in the introduction). The larger these units are and the more different the size compared to other countries, the more the map image is falsified. Although the map shown - which is based on data from the Center for International Earth Science Information Network (CIESIN) at Columbia University New York - shows close-knit values ​​of relatively small areas for many countries , there are also large areas with only one area due to the lack of detailed data Average value (e.g. Serbia).

One possibility for better comparability is the small-scale consideration of the population in grid cells of a standardized grid, for example according to the INSPIRE specification. Administrative boundaries no longer play a role here.