The Blücherschule, inaugurated in 1897, without the new sports hall porch.

Typical street scene in the Westend, near the Blücherplatz 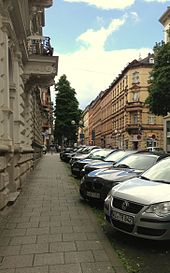 Westend, Bleichstraße is a district of the Hessian state capital Wiesbaden .

The smallest district of Wiesbaden with an area of ​​0.67 square kilometers is densely built up and architecturally shaped primarily by buildings dating from the Wilhelminian era.

With around 18,000 inhabitants (proportion of foreigners: 33 percent), the calculated population density is over 27,000 inhabitants per square kilometer. This makes the Westend one of the most densely populated districts in Germany . The proportion of residents with a migration background was 47 percent in January 2017, of which the proportion of foreigners was 32.2 percent. In the Inner West End, 61.6 percent of the residents had a migration background with 45.6 percent foreigners. The proportion of residents who have lived for less than two years is 27.7 percent, 9.4 percent higher than the Wiesbaden average. The unemployment rate is 11.6 percent and 4.2 percent above the Wiesbaden average. The most common foreign citizenships are Turks with 13.3 percent and Bulgarians with 12.6 percent, in the Inner West End there are even 14 percent Turks and 19 percent Bulgarians.

The Westend is a multicultural city district. A business center with more than 60 specialty shops and ten nationalities offers Wiesbaden residents and people from many countries a home. The urban and architectural charms of the lively district have recently become more important again. This can be seen in the numerous carefully restored buildings and a lively social life. The quarter has a fairly high and well-kept stock of old buildings with moderate rents. In addition to the city's highest proportion of foreigners, the majority of Wiesbaden's students also live here.

The boundaries of the district Westend / Bleichstraße are described in the main statute of the state capital Wiesbaden as follows:

Historically, the West End is separated from the Bismarckring , which runs in a north-south direction, with the northern extension of Weißenburgstrasse into the Inner and Outer West End, also known as the Feldherrenviertel . Another continuous north-south axis is formed in the Feldherrenviertel by the Zietenring and the Gneisenaustrasse . The houses in the Inner West End were built around 1850, in the Feldherrenviertel from the end of the 19th century. They are usually one floor higher and have numerous decorative elements. They appear lighter and more elegant than the representative houses in the southern Rheingau district .

The Westend has only a few spaces, 3 percent are green. With the exception of Sedanplatz , which connects Bismarckring, Wellritzstraße and Westendstraße, and Blücherplatz , other places are located on the boundaries of the local district: Platz der Deutschen Einheit in the east, Elsässer Platz in the west and the busy intersection of Dürerplatz in the north. The Faulbrunnenplatz is still a sandy desert in 2017. The new fountain stele on Bleichstrasse does nothing to change that.

The German Unity Square was relocated and redesigned. It is now free of traffic and is partially traversed by the Kesselbach in the summer months. In winter the stream flows completely through an underground flood channel. At the northern end of the Bismarckring is Sedanplatz, which is, however, enclosed by noisy traffic. The Blücherplatz at the Blücherschule in the Feldherrenviertel is mainly used as a large playground and has a high population of trees. The Elsässer Platz consists exclusively of a parking area for 375 cars. A planned redesign with an underground car park fails due to the high construction costs. A parking space would have to cost 150 euros per month to refinance the construction costs.

There are just three playgrounds for the many children in the district : on Blücherplatz, in Wellritzhof on Wellritzstraße and above the underground car park of the Rhein-Main-Hochschule on Bertramstraße.

Street trees were planted in many streets in the 1960s. They green the city and improve the air, but also take away a lot of light from the apartments, as they are close to the house walls. Only on the Bismarckring and on the Zietenring were the trees planted on the central green strip.

Numerous bus routes cross the Westend. Transfer hubs are the Platz der Deutschen Einheit and for the opposite direction the Luisenforum on Dotzheimer Straße.

Parking spaces on the street are very scarce because of the dense development. But there are several parking garages and an underground car park under the new sports hall near Schwalbacher Strasse.

From the Platz der Deutschen Einheit to Elsässer Platz, Bertramstrasse and Goebenstrasse are designated as cycle roads. There are no bicycle lanes and there are only short sections of bicycle lanes. In the Westend in particular, cycling is very dangerous.

Since April 12, 2019, a section of the narrow Wellritzstrasse has been closed to car traffic on a trial basis for 1 year. Gastronomy is now spreading on the sidewalk while pedestrians stroll on the street.

Election results for the local council

Since 1972, as part of which is local elections in Hesse and the town council of the local district Westend, Seilerstraße selected. The individual election results are summarized below (information in the table in percent).

This resulted in the following allocation of seats:

In the inner Westend, which is rich in children, there is no elementary, secondary or secondary school today. An elementary school was built on Bleichstrasse in the years 1877–79 by the Berlin architect Louis Ende. The late classicist long building had 2 separate entrances for boys and girls in the dominant central projection, which reinforce the Renaissance-like character with column elements. Until 1966, the building housed a vocational school for home economics, named after Louise Schröder. It stood empty for over two decades. In 1990, renovation work began for the economics department at the Wiesbaden University of Applied Sciences. The basement was lowered for the temporary cafeteria and library, the top floor was expanded and the two stairwells were renovated in accordance with listed buildings. The former school yard extended to Bertramstrasse. Today there is an underground car park and a new building for the now renamed Business School of the RheinMain University of Applied Sciences . The small green area is not freely accessible, only the lovelessly designed playground in the underground car park.

The Elly-Heuss-Schule, a bilingual high school with around 1150 students, is located on the square of German Unity.

The Georg-Buch-Haus community center is located at Wellritzstrasse 38, at the corner of Walramstrasse and Hermannstrasse. The building complex was built in 3 sections between 1880 and 1900. The former trade school was located here. In the second annex there is a hall for 120 people on the upper floor. The Wiesbaden city council met here temporarily after the Second World War. Below this is the Wellritz Café, which is frequented by many mothers with children. In the building complex there is a youth center and the Wiesbaden school for drama . There are also 4 art studios on the corner of Walramstrasse and Hermannstrasse.

The only church building in the local district is the Catholic St. Elisabeth Church on Zietenring.

Of greater importance, however, is the ring church belonging to the Rheingauviertel , which stands south of the Bismarckring.

In the Westend there are noticeably many art galleries in the side streets.

Almost all the streets are lined with hundreds of houses that are protected as cultural monuments. The listed houses, but also many others, are mostly from the time the district was built around the turn of the 19th and 20th centuries.

Districts of the state capital Wiesbaden