Erbenheim is a district of the Hessian capital Wiesbaden .

The place has around 10,000 inhabitants and was incorporated into Wiesbaden on April 1, 1928.

The nearby American military airfield Erbenheim is in the direction of the Wiesbaden districts of Delkenheim and Nordenstadt. In the Middle Ages, Erbenheim was an independent town. The Erbenheimer Warte, which was already in the district of Kastel, was a watchtower of the Mainz Landwehr in the Middle Ages . The former Wiesbaden racecourse can only be guessed through the remaining Rennbahnstrasse. Opposite the town hall there is a public scale that is still in use. 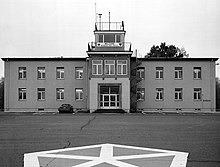 A network of trails for cyclists begins from Erbenheim; the dirt roads are also largely car-free. A tour past the Mechtildshausen domain , which can be visited, is well worth seeing . A corresponding tour route leads past Erbenheim Airport in the direction of the Nassau orchards. From here the network of trails extends in the directions of Hochheim, Kostheim and Kloppenheim / Naurod. These opportunities are regularly used by hikers, cyclists and inline skaters.

There are several restaurants in the village, which cover a wide range of offers in very different price segments. In the center there are several small shops as well as various butchers and bakeries.

Memorial stone to the first school in Erbenheim

Church of the Pauline Congregation

Erbenheim stands on ground steeped in history. The archaeological excavations in particular have shown how densely populated the area around the Waschbach was in ancient times, as early as 5000 years before Christ.

In 927 Erbenheim is mentioned for the first time in the document for St. Ursula in Cologne , which is also important for some other Wiesbaden suburbs . In 1423 the Roman-German King Sigismund Erbenheim granted town rights .

After the Thirty Years' War , Erbenheim developed into an agriculturally important community, in which also viticulture and a lot of sheep was farmed.

The big Erbenheim inns were always great attractions not for Wiesbaden, but also for the citizens of the surrounding towns - not least because the visitors of the 1907 to 1910 racetrack after the famous Erbenheim horse races like to have a drink in the many Erbenheim inns stopped. The Erbenheimer Rennbahn was opened in 1910 and converted into a civil airport in 1929.

The electric tram first ran between Wiesbaden and Erbenheim in 1906. At the same time, the electric light came to Erbenheim, which could be switched on for the first time in October 1908. In 1937 the tram service was stopped again; Omnibuses took over the transportation of people.

The strong tower of the Protestant Pauluskirche in Alt-Erbenheim was built in the Middle Ages.

From 1834 to 1835, today's “Erbenheimer Rathaus” was initially built as a school. Town hall was the building only from 1926. The school, today Justus-von-Liebig-Schule, was built in 1900.

In 1928 it was incorporated into the city of Wiesbaden.

Election results for the local council

Since 1972, the local council of the Erbenheim district has been elected as part of the local elections in Hesse . The following distribution of seats resulted from the individual election results : 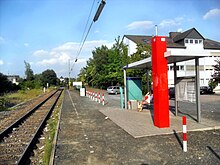 The Wiesbaden-Erbenheim train station is 400 m west of the town hall ( 50 ° 3 ′ 17 ″  N , 8 ° 17 ′ 44 ″  E ) on the Ländchesbahn , which connects the district with Wiesbaden Central Station . This railway connection can also be used to reach Niedernhausen im Taunus . As part of the renovation of the Ländchesbahn train stations, it is planned to relocate the station in the direction of Berliner Straße in order to shorten the distances between the bus stop and the town center. 50.054722222222 8.2955555555556

Districts of the state capital Wiesbaden