Under incorporation ( english merger ) refers to the merging of two or more in the German language communities , which usually one of the original communities is greater than the other, while speaking with equally large communities rather of "pooling".

In Germany, the term is also a legal term in local law for the incorporation of at least one municipality or a municipality-free area into an already existing municipality. The receiving community remains in place, the integrated one is dissolved and loses its legal capacity .

The opposite is the settlement , the change of affiliation of an area from one community to another is called umgemeerung .

Incorporation can be the result of a general regional reform or be based on a specific law that applies only to this incorporation. Another way of municipal reform is in addition to the incorporation of the municipality of fusion . A municipality merger is the merger of at least two neighboring municipalities to form a new, so that the communities involved to give up their existence as individual communities and join together to form a new community that all public functions of the previous Municipalities takes over. Territorial reforms therefore take place through the withdrawal of a whole or part of a municipality, for example through a merger (municipality merger) or incorporation and simultaneous enlargement of another existing municipality. A local reorganization is always associated with a regional reform.

The usage of the new structure designates with community merger the amalgamation of communities of the same size, close together, whereby the new regional authority often receives a double name (composed of the names of the merging communities) or a new name. Congregation mergers exist as a merger to form a new congregation or as incorporation in the form of the admission of a congregation into another congregation. Comprehensive regional reforms always come from a state government , while incorporations on a voluntary basis can also take place between the municipalities involved.

Either there is the incorporation through the agreement of the municipalities involved with a subsequent ruling by the state government on changing the municipal boundaries or, if there is no agreement, the incorporation through the enactment of a law (Section 17 (2) HessGemO). The first form presents itself as a public law contract of the municipalities involved and the government's statement as the state approval of this contract from the point of view of the supra-local public good. Such approval or confirmation of contracts is an administrative act as a regulation of an individual case .

In the case of incorporation, a municipality gives up its legal independence. The - mostly smaller - community loses its independence:

Formally, a distinction is also made between the mixed form, in which the newly created community bears the same name as one of the dissolved communities: 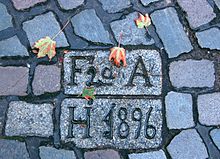 Old boundary stone between the once separate cities of Altona and Hamburg from 1896, which still exists today in Brigittenstrasse, in the Hamburg district of St. Pauli since 1938 .

A popular form of incorporation occurs when a city that is expanding in terms of area with independent municipal rights reaches suburbs seamlessly and these are incorporated into the larger city ( urbanization ). In the course of urbanization in the 19th century, the outskirts were by no means always created through urban expansion in the sense of spatial expansion, but also through the incorporation of suburbs or villages .

Often it was only through incorporation that larger cities could emerge or that urban planning could be designed across regional boundaries, such as the Hobrecht Plan in Berlin from 1862. The incorporation policy of the German Empire after 1935 was aimed at integrating larger communities with over 25,000 inhabitants from 1935 onwards to be carried out only with regard to those communities with a smaller population that already had an urban character and were so closely interwoven with the neighboring, larger city in terms of urban planning, economics and transport that they formed a uniform conurbation with it. After the seizure of power by the National Socialists were also made politically motivated forced amalgamations such. B. Eibingen in the Rheingau in Rüdesheim am Rhein . In the course of community reforms since the late 1960s, the number of communities in western Germany was reduced from 24,282 (1968) to 8,513 (2004) through mergers and incorporations. These associations, too, did not always follow the principle of voluntariness and in some cases still cause displeasure among the population of the former communities. An example of this is the requirement created by the Cologne Act of January 1975 for the incorporation of Porz , Rodenkirchen , Lövenich , Widdersdorf , Esch and Pesch into Cologne, which increased the area of ​​the city by 44% and 43 km², while the population increased by 20 % increased to 996,000. This incorporation was the reason that Cologne was able to advance to a metropolis .

In eastern Germany , extensive municipal area reforms took place in the 1990s and 2000s . In addition to the intended elimination of the smallest administrative units , this means was also used in over-indebted municipalities such as B. the municipality of Kittlitz (January 2003) or the city of Siebenlehn (September 2003) in Saxony .

In Austria, incorporations were carried out continuously during the 19th and 20th centuries. So the former suburbs were incorporated into Vienna , which were even smaller than today's Viennese districts . But that was also the case with other cities. During the community reforms, several smaller cadastral communities were usually merged into one large community . Due to the escalating growth (especially through shopping centers and commercial space) of " bacon belt communities " around the big cities (prominent examples: Wals near Salzburg , Rum near Innsbruck , Pasching near Linz , Seiersberg near Graz , Vösendorf near Vienna) and the associated drainage of purchasing power massive infrastructural and economic problems for the regions. Spatial planning experts in Austria have been calling for new municipal area reforms for a long time, but largely fall on deaf ears with politicians, as the spatial planning tool "incorporation" is often viewed negatively.

In German-speaking Switzerland , the cities of St. Gallen , Winterthur , Bern , Biel and Thun were able to solve their development problems through incorporation; in the case of Zurich , the incorporation took place in 1934 due to urban planning difficulties.

Incorporation can have an impact on residential and business headquarters , constituencies , schools , local taxes or savings banks . What they all have in common is their dependence on a municipality area, so that a change in a municipality area automatically results in a change in these geographically oriented legal institutions . For example, changes in area due to the regional reform in North Rhine-Westphalia led to significant transfers from Sparkasse branches. As a result of the regional reform in North Rhine-Westphalia of January 1975, the Kreissparkasse Köln (KSK) lost 26 branches to the Stadtsparkasse Köln ; this "Cologne Law" brought about the dissolution of the former districts of Cologne and Bergheim, which were absorbed into the Erftkreis . The transfer of the branches of the KSK, which are now outside the guarantor area , was ordered on June 30, 1983 by the savings bank supervision. In January 1985, the Oberbergische Kreis became a member of the Sparkassenzweckverband, whereby the Kreissparkasse Waldbröl became part of the KSK Cologne; In December 1988 the KSK Cologne received eight branches of the Kreissparkasse Euskirchen .

After incorporation (and new foundations), the acceding community usually functions as a town or city district defined in accordance with the statutes , which usually bears the name of the original community. These districts or districts are partially given a political representation, the local council , local advisory council or city district council. Depending on the size of the districts or districts, several former municipalities can be combined to form a village or a district .