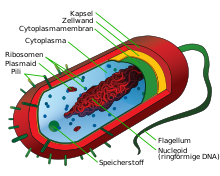 Schematic representation of a prokaryotic unicellular living being. Prokaryotic flagella have the shape of a helix . The flagellum is not shown realistically here.

The expression (from ancient Greek πρό pro 'before' and κάρυον karyon 'core') refers to the seedlessness. The term Prokarya is used less often, the name Monera is out of date.

The division of living beings into prokaryotes and eukaryotes was first clearly emphasized by Edouard Chatton in 1925 for unicellular forms of life when distinguishing between protists . The more recent division of cellular organisms into three domains corresponds to the division of prokaryotes into the two domains bacteria and archaea . The third domain are the eukaryotes.

In their cells ( eucytes ), eukaryotes have a “real” nucleus , separated from the surrounding cytoplasm by a double membrane , in which the DNA is organized in chromatin . In prokaryotic cells ( protocytes ), however, the DNA is freely located in the cytoplasm.

In contrast to eukaryotes, prokaryotes do not contain any membrane-bounded organelles such as plastids and mitochondria , nor do they contain dictyosomes , centrioles and mitotic spindles. They also have no vacuoles and no endoplasmic reticulum (ER).

The size of prokaryotes (with elongated ones the diameter) is between 0.2 and 700 µm ( Thiomargarita namibiensis about 700 µm).

The shapes are not very complex, except for myxobacteria . The structure of the cell envelope, on the other hand, is complex, sometimes with a second cell membrane . Murein (a compound made up of sugars and amino acids ) is only found in the cell walls of bacterial cells .

The physiological diversity is very high. Some prokaryotes are viable under extreme conditions : temperature range up to over 100 ° C; oxic or anoxic environment; acidic environment (pH 1-4); high hydrostatic pressures (1000 bar).

The respective type strain (the cultivated prokaryote strain on which the new description was based) must be stored in at least two strain collections and thus made accessible to other scientists. In Germany this is possible with the Deutsche Sammlung von Mikroorganismen und Zellkulturen GmbH ( DSMZ ), in France with the Institut Pasteur , in Belgium with the BCCM (Belgian coordinated collections of microorganisms).

The reason that so far only such a small proportion of species has been recorded is that traditionally the organisms are described using a culture , but that culture methods are only known for a small part of the prokaryote species. Nucleic acids of the prokaryotes located therein can be obtained from habitats and characterized. Based on the data obtained in this way, the prokaryotic society in it can be characterized and the number of species it contains can be estimated. From the results of these investigations in comparison with the results of cultural investigations, one concludes that there is a very large proportion of prokaryote species that were previously not cultivable in the prokaryote societies of natural habitats. In addition, many habitats are hardly accessible for investigations: Prokaryotes have been detected up to 77 km in height in the atmosphere and up to 4 km deep in the earth's crust , i.e. far below the ground . More than half of all prokaryotes live in the soil between 10 and 100 m depth (also underwater), although this depth is difficult to access.

Total amount and distribution on earth

The number of prokaryotes in animals, plants, polar ice and the atmosphere is so small that it can be neglected for the total number on earth. The vast majority of prokaryotes are found in the aquatic and terrestrial subsurface.

It is estimated that around 1.7 · 10 30 cells are newly formed each year . This value appears low with regard to the total number of cells, it can be explained by the fact that the turnover time at terrestrial depths is estimated at 1000–2000 years.

The prokaryotes are the earliest known cellular creatures in evolutionary history . The study of prokaryotes in water bodies and in the earth, including the sea ​​and sea floors, is one of the research areas of geobiology and geomicrobiology .