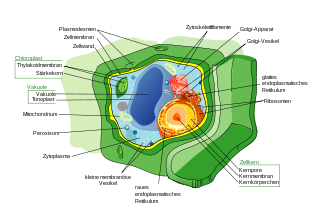 Eukaryotes or eukaryotes (Eukaryota) are a domain of living beings whose cells ( eucytes ) have a real nucleus and a rich compartmentalization ( animals , plants and fungi ). This is where they differ from the other two domains in the system of living beings , the prokaryotic bacteria and archaea (the latter also known as primordial bacteria in the past), both with procytic cells.

The cells of the eukaryotes usually have a diameter of 10 to 30 µm. They are usually much larger than those of prokaryotes , their volume is about 100 to 10,000 times. For a smooth functioning of the cellular processes over larger distances within the cell, a higher degree of organization and a division of the cell space into compartments (delimited spaces) as well as transport between these compartments are favorable. For this reason, eukaryotic cells are structured by means of cell organelles which, like the organs of a body, perform different functions. The organelle that gives it its name is the nucleus with most of the genetic material of the eukaryotic cells. Depending on the type, other genes are found in mitochondria (organelles that provide energy through chemical reactions), in individual cases also in their related hydrogenosomes and in almost all plastids (including the photosynthetic chloroplasts ). The organelles of the endomembrane system serve for intracellular transport .

Structure and shape are given to the eukaryotic cells by the cytoskeleton , which is also used for locomotion. It is made up of microtubules , intermediate filaments and microfilaments . Some eukaryotes, such as plants and fungi, also have cell walls that enclose the cells outside the cytoplasmic membrane and determine their shape.

Another special feature of eukaryotes is protein biosynthesis : unlike prokaryotes, eukaryotes are able to use the same DNA information to produce different proteins through alternative splicing .

Eukaryotes can be single-cell or multicellular organisms. These consist of a large number of cells with a common metabolism, with special cell types taking on certain tasks. Most of the known multicellular cells are eukaryotes, including plants , animals and multicellular fungi .

→ Main article : Systematics of the eukaryotes

In the biological system , the eukaryotes form one of the three domains , i.e. the highest categories for the classification of living beings. The current systematics of the eukaryotes was developed by Adl et al. Established in 2012. It divides the eukaryotes as follows:

There are also numerous taxa with an uncertain position ( incertae sedis ), including among others

Cavalier-Smith classifies the eukaryotes as follows:

A possible scenario for “eukaryogenesis”. 1-2: A archaeon from the group of Lokiarchaeota incorporating a Rickettsia -like α-proteobacteria . 3: The symbiosis with the incorporated bacteria creates the first mitochondria-using / -housing organism (1MO or FME, First mitochrondria hosting endosymbiont) 4: The "primordial eukaryote" (LECA, Last eucaryotic common ancestor)

The oldest macroscopic, multicellular, possibly eukaryotic fossils are 1.5 billion years old. It is not known whether the hypothetical evolutionary precursors of the eukaryotes - the so-called original karyotes - already had organelles (these would have been necessary due to the disadvantageous surface-volume ratio) or whether they only acquired them in the course of their evolution towards the actual eukaryotes. The best-known theory about the origin of organelles is the endosymbiotic theory , which states that mitochondria and chloroplasts go back to bacteria that were originally ingested as food by the cell-biological "primitive", predatory karyotes and some of which were not digested by chance, but a symbiosis entered with the original karyote.

The last common ancestor of all today's eukaryotes - also called Last Eukaryotic Common Ancestor , LECA for short - should have had both a demarcated nucleus and mitochondria, since all eukaryotes examined so far have mitochondria, mitochondrial-like organelles or at least nuclear DNA of mitochondrial origin (transferred by lateral gene transfer ). Although Thomas Cavalier-Smith introduced the designation Archezoa for recent amitochondrial protozoa with a nucleus, which he considered to be evolutionary relics from the time before LECA, there was increasing evidence that the Archezoa are secondary amitochondrial real eukaryotes, that is, descendants of LECA.

As an alternative to the original karyote hypothesis, an acquisition of mitochondria by archaea is being discussed ( hydrogen hypothesis ) before or at the same time as the nucleus, which could possibly be of viral origin (among the NCLDVs ) ("viral eukaryogenesis", part of the " Out-of-Virus Hypothesis "). DNA viruses such as the ' Medusaviridae ' are traded as candidates; and also the ' Pseudomonas Phage 201phi2-1 ' from the genus Phikzvirus , family Myoviridae , a giant bacteriophage , forms a nucleus-like structure when a bacterial cell is infected, which separates proteins depending on their function, this nucleus-like structure and its key properties were also found in found the related phage.

The formation of the chloroplasts of photosynthesizing eukaryotes by endosymbiosis is a later process. Initially, cyanobacteria were ingested by non-phototrophic eukaryotes, which possibly happened only once in this form ( primary endosymbiosis ). The other plastids ( leukoplasts etc.) are derived from these.

The division of living beings into prokaryotes and eukaryotes was first clearly emphasized for protists by Edouard Chatton and published in 1925.

This division initially faded into the background with the introduction of the three- domain system by Carl Woese in 1977, an approach that divides cellular life into the three domains of bacteria, archaea and eukaryotes.

In 1984, James A. Lake and colleagues proposed the eocyte hypothesis : It had been discovered that the shape of the ribosomes in the archaeal group of crenarchaeota (originally called eocytes) and eukaryotes was remarkably similar but the shape of the ribosomes both in bacteria and in the Euryarchaeota , another group of archaea, differs significantly from it. It was therefore assumed that the eukaryotes emerged from the Crenarchaeota.

Despite further evidence in the 1980s, the eocyte hypothesis only got a new impetus in the 2000s with the advancement of genome analysis. Genes that are found in a similar form in eukaryotes have been discovered in a number of archaea. According to the results of some studies, instead of the Crenarchaeota, the related group of Thaumarchaeota was proposed as the origin of the eukaryotes. (The Crenarchaeota and Thaumarchaeota are combined together with some other archaea groups in the supergroup "TACK").

With the advent of metagenomic analysis , since 2015, it has been possible to identify candidates for archaeal groups in samples from the vicinity of hydrothermal sources , which must be much closer to the eukaryotes than any of the groups previously considered. The first group was that of the " Lokiarchaeota ", found at a hydrothermal vent called " Loki 's Castle" in the Arctic Ocean between the poppy and Knipovich ridges . Since these findings only come from a metagenome analysis and the microbes in question cannot be cultivated for the time being, all taxa in question only have a 'candidate status', indicated by the quotation marks.

The "Lokiarchaeota" are combined into a candidate group " Asgard " due to their similarity in the genome with some groups recently proposed in this context (" Thorarchaeota ", " Odinarchaeota " and " Heimdallarchaeota ") , which among the archaea is the eukaryotes is next and represents a sister taxon to the supergroup "TACK".

In order to take account of the close relationship between the archaea and the eukaryotes, Thomas Cavalier-Smith placed them in a common taxon Neomura in 2002 , which is a sister group to the bacteria.

This new classification is supported by more recent findings, according to which the use of the DNA genome as the carrier of genetic information in bacteria on the one hand and archaea and eukaryotes on the other seems to have different (possibly viral: another part of the “out-of-virus hypothesis”) . The last common ancestor of all living things known today would have been an archaic cellular organism of the RNA world (with ribosomes , i.e. protein synthesis).