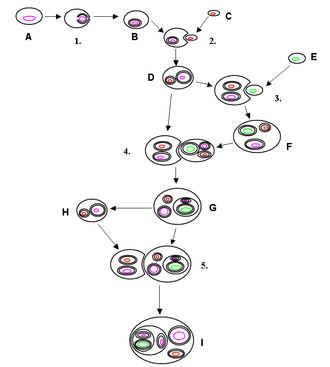 The endosymbiotic theory ( ancient Greek ἔνδον éndon 'inside' and συμβίωσις symbíōsis ' living together') states that eukaryotes emerged from an endosymbiosis of prokaryotic precursor organisms . According to this, chemotrophic and phototrophic bacteria were ingested by archaea , in which they developed into cell organelles of their host cells, including mitochondria and plastids . However, there are also eukaryotes that neither do cell respiration nor photosynthesis and have no such organelles, whereby it is assumed that these cell components have subsequently been lost.

The idea of ​​the endosymbiotic theory was first published by the botanist Andreas Franz Wilhelm Schimper in 1883, who tried to explain the origin of chloroplasts . The hypothesis was taken up again around 1905 by the Russian evolutionary biologist Konstantin Mereschkowski , in 1922 by Ivan Wallin and in 1924 by Boris Koso-Poljanski . But it wasn't until 1967 with the publication of Lynn Margulis that she became better known.

The endosymbiotic theory assumes that mitochondria and plastids have developed from independent prokaryotic organisms. In the course of the evolutionary process , these unicellular organisms have entered into an endosymbiosis with another cell, which means that they live in their host cell for mutual benefit. Even today one can observe that amoeboid protozoa (ie those with a “soft” membrane ) ingest cyanobacteria without digesting them.

The interaction of the two cellular organisms then developed into a mutual dependency in the course of evolution , in which neither partner could survive without the other, that is, a symbiosis developed . This is called endosymbiosis . The dependency goes so far that the organelles have lost parts of their (no longer required) genetic material or the corresponding genes have been partially integrated into the core genome. Individual protein complexes in the organelles, such as B. ATP synthase , are composed partly of nuclear-coded, partly of mitochondrially coded subunits.

Primary plastids are surrounded by two enveloping membranes, which correspond to the two membranes of the ingested cyanobacterium, while the original third membrane formed around it during phagocytosis is no longer present. There are a total of four lines of primary plastids and therefore of autotrophic primary endosymbionts:

In all of these lines, the cyanobacteria that were once absorbed have been adapted to such an extent that they are no longer viable and have become the organelle, the plastids or chloroplasts. It has long been debated whether the resulting primary chloroplasts originated from a single endosymbiotic event or from several independent events in different eukaryotic lineages. It is now generally accepted that virtually all organisms with primary chloroplasts have a single common ancestor, which arose from a primary endosymbiosis about 600 million to 2 billion years ago. The time taken cyanobacterium was apparently near the present species Gloeomargarita lithophora , this is basal in the family tree of cyanobacteria close to the genus Synechococcus . The alga Cyanophora , a glaucophyte , is one of the most primitive organisms that contain a chloroplast. The exception is Paulinella chromatophora . This apparently comes from an ancestor who, independently and much later - about 90 to 500 million years ago - took in a cyanobacterium of the genus Prochlorococcus (or Synechococcus ).

Secondary plastids have three or even four covering membranes. There is no known case in which ingestion of a glaucophyte resulted in secondary endosymbiosis. In contrast, there is an abundance of groups of organisms that have ingested a red alga and have reduced it to varying degrees. Some authors assume that this event occurred only once in evolution, and so define the monophylum of the chromalveolata . In this group belong brown algae , yellow-green algae , golden algae , Cryptophyceae , haptophyte (calcareous algae), and the Apicomplexa (z. B. Malaria germs can Plasmodium ).

The endosymbiont theory - based on autotrophic organisms and the development of the different pigment systems. The graph is based on the assumption that the red algae and choroplastid lines are based on two separate primary endosymbiosis events. However, the very original glaucophytes are not taken into account here. According to the prevailing opinion today, these are located in the basal family tree of the first three plastid lines listed here, only the small Paulinella line that was not taken into account later developed from a separate primary endosymbnosis.

There are some protozoa ("Archezoa") that have no mitochondria (and certainly no plastids). At first it was assumed that they were primitive and emerged directly from the primitive host cell of the endosymbionts. This is probably wrong. Most of these organisms have organelles with the hydrogenosomes or mitosomes , which apparently either originate from mitochondria or have a common origin with these in the α-proteobacteria. In some cases, their own DNA and ribosomes are still present.

An exception is the genus Monocercomonoides ( Excavata ), which have no organelles from this group. It is believed that these unicellular organisms acquired a cytosolic system through horizontal gene transfer in order to provide the iron-sulfur clusters required for protein synthesis. After that, their mitochondrial organelles were superfluous in all their functions and were lost. In all these cases, the DNA in the cell nucleus contains sequences that are clearly of mitochondrial origin. All amitochondrial eukaryotes have probably lost or transformed their mitochondria secondarily.