The aphids or Aphidoidea belong to the plant lice (Sternorrhyncha). About 850 of the 3000 known species live in Central Europe. All aphids feed on sap. A number of species are considered to be pests of useful or ornamental plants.

Aphids are small insects a few millimeters in size, some species can reach a body length of up to 7 millimeters. The animals are equipped with a proboscis as a plant teat. In most species wingless forms predominate, but winged forms also occur in the generation change , which then mainly serve the distribution and host change . Mass reproduction through virgin generation ( parthenogenesis ) is widespread.

Aphids sting as with the suction pipe formed mouthparts targeted vascular bundles of the host plant and sucking from phloem sap . They primarily take up the amino acids it contains ; The majority of this carbohydrate- rich juice is excreted as sugary honeydew and then attracts other insects and vertebrates, and serves as a nutrient medium for black and sooty fungi .

In most species, a sexual generation (made up of males and females) alternates with several (up to forty) successive generations of females produced by parthenogenesis , which is known as the holocycle. In many species, however, sexual reproduction has been lost (so-called Anholo cycle); only parthenogenetic females are formed. The sexual forms leave from eggs, while the parthenogenetic generations always viviparous ( viviparous are). This rule is only deviated from if there are two families. Depending on the environmental conditions, usually after four nymph stages, winged or winged offspring are produced. This happens, for example, in the event of overpopulation in one place. About ten percent of the aphid species are host changes, i. H. different generations live on different types of plants. In these species, the change is also made by winged animals. 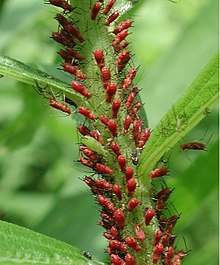 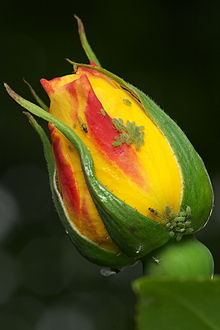 SEM - anaglyph representation of aphids on the underside of the leaf, magnification 50 × 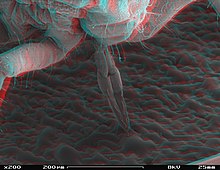 SEM anaglyph representation of aphids on the underside of the leaf, magnification 200 ×

In 2005, researchers from the University of Jena and the Max Planck Institute for Chemical Ecology there found out that the production of the winged offspring can also be triggered by an alarm scent ( pheromone ) that the aphids emit when they are attacked by enemies such as ladybirds to be attacked. The alarm scent called β- Farnese causes great unrest in the aphid colony and all animals move significantly more or even let themselves fall from the leaf. As with an overpopulation, this increased unrest now causes the immediate production of winged offspring.

In addition to the immense economic damage that aphids can cause in all agricultural and horticultural crops, they also represent a considerable problem for the hobby gardener . Their sucking activity on the plants leads to yield and quality losses and even complete crop failure. Aphids are also the most important animal carriers of plant viruses . The viral diseases of the plants are often greater than the damage directly caused by the lice.

The aphid infestation usually begins unnoticed, but under optimal conditions for the pest an explosive multiplication follows. Practically all plant species are attacked. The lice are usually found in shaded areas on the underside of leaves and near the roots of flowers and leaves.

Aphids can be controlled by:

Some species of tree lice are not only considered pests, but are very important for beekeeping as producers of honeydew .

Aphids represent a very diverse group, which is also represented in Central Europe by a number of family taxa .

The oldest fossil evidence of an aphid, Triassoaphis cubitus , was found on a Triassic deposit in Australia. In addition, representatives of numerous families of aphids are quite often preserved as inclusions in Cretaceous and Tertiary amber , especially in Baltic amber . Strangely enough , only larvae and wingless imagines of females were found of the species most common in Baltic amber, the Germaraphis dryoides . The discovery of aphids together with iridomyrmex in a piece of Baltic amber fueled the assumption that there was a symbiotic relationship between aphids and ants as early as the Eocene , as it exists today. However, since the aphids are representatives of the extinct genus Germaraphis , whose closest relatives only secrete wax and no honeydew and are therefore not milked by ants, the final proof of this symbiosis is missing .

In the Middle Ages it was believed that an increased incidence of aphids was caused by rain, namely the so-called nephew rain . This theory was refuted by the beginning of the 18th century at the latest.