The hoverflies (Syrphidae), also standing fly or Schwirrfliegen called, are a family of insect order Diptera (Diptera). Within this they are assigned to the flies (Brachycera).

Around 6000 species have been described worldwide, 1800 of them for the Palearctic . The most noticeable and eponymous feature is their ability to remain flying in one place with a high degree of constancy, even with moving air. However, representatives of some other families of the flies are capable of such a soaring flight , for example most species of the woolly hover . Many species of hoverfly, which are harmless in themselves, are also known for imitating the appearance of defensive hymenoptera in order to have a deterrent effect ( mimicry ).

Appearance of the hoverflies

There are a number of different species within the hoverflies, and their appearance is correspondingly varied. Many hoverflies have bumblebee - wasps - or bee-like shapes and drawings. They can easily be confused with these but are harmless. This mimicry simulates a non-existent danger to predators of the hoverflies: In contrast to their “role models”, they have no sting. The body can be stocky or long and slender; there are also hairy and hairless species.

As in most groups of flies, the mouthparts of the hoverflies have been transformed into licking tools. The front head area can be extended like a snout in some species, for example in the species of the beaked hover flies (genus Rhingia ). Equipped in this way, hoverflies are able to ingest liquid food such as nectar and to "bite" pollen. The complex eyes are very large, especially in males, and collide on top of the head. Depending on the species, they can be smooth or hairy. The tripartite antennae are in the front between the eyes. Their end link carries a typical bristle or an end pen; the antenna bristle (Arista) can also be feathered. On the top of the head there are usually three point eyes ( ocelles ).

The chest section, which, like all insects, bears the wings and legs, has a large mesonotum on top , on which a label attaches to the abdomen. Like all two-winged birds, they only have the front wings (with calypter); because their rear wings are transformed into stubby swinging arches (holders), which are particularly indispensable for stabilization in hovering flight . A so-called spurious vein (Vena spuria) in the forewings is characteristic of hoverflies in the wing veins. The front legs of most hoverfly species are weak, but the hind legs are strong. Parts of the legs can be widened or thickened depending on the species.

The abdomen is very variable, both in shape and in color. It consists of four dorsally visible segments and its shape can be wedge-shaped, thickened like a bumblebee, elongated or club-shaped. The coloring of the species ranges from a metallic black and black-blue to gray tones to a variety of banding and spotting, especially in yellow and black. Many hoverflies also have a very hairy abdomen. The male sex organs are folded in asymmetrically in most species, but more clearly visible in others. 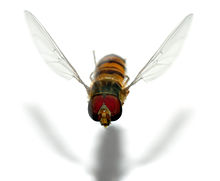 Adult hoverflies fly with a high frequency of flapping their wings, up to 300 Hertz ( hovering flight ) and can thus "hover" on the spot for a longer period of time. Their “exploratory” behavior is often conspicuous, in which they cleverly penetrate into apartments through crevices, for example - but when they withdraw they usually “fail” at the window glass and soon die of thirst. Light skin is also often explored and dabbed off.

Their diet consists of nectar and pollen . This is why the hoverflies play an important role as pollinators , so that in the temperate latitudes they represent the most important pollinator group alongside the bees (Apoidea). Various tests have shown that the hover flies orient themselves optically and have a preference for yellow flowers. In some species, pollen intake is necessary for the development of the gonads , such as the late cerebral hover fly and the widespread grove hover fly .

Numerous species of hoverflies belong to the migratory insects and carry out directed seasonal migrations. In autumn, these lead from Central Europe to the south and southwest into the Mediterranean region. The animals cross the passes of the low mountain ranges , the Pyrenees and the Alps (for example at Col de Bretolet in the Valais Alps). In the spring, the train is in the opposite direction. The seasonal migrants include the hover fly ( Episyrphus balteatus ) and the so-called dung bee ( Eristalis tenax ), which move using favorable and avoiding unfavorable winds. Their behavior is similar to that of migratory butterflies and birds. The hoverflies migrate to the south at low altitudes - and therefore visible to the eye - only when there is a headwind and when the mountains are climbing. The hoverflies try to fly under unfavorable air currents. With tail winds, hoverflies move at great heights over the German low mountain range. Above the Swabian Alb, for example, a strong fly train was detected with special optics at altitudes of 1000 to 1400 meters above ground (up to 2000 meters above sea level). Birds were also observed up to great heights to hunt hoverflies migrating there. At the Randecker Maar research station on the Swabian Alb, the migrations of hoverflies have been documented since 1970 and the animals are recorded, determined and counted with the help of fish traps. In the past few years, a sharp decline in the number of animals recorded was noted. The researchers attribute this to the use of toxins in agriculture.

With the hoverflies, finding a partner is very likely optically. For this purpose, the males have enlarged compound eyes . In a kind of shaking flight, they pounce on an identified female and mate her in flight. In the case of the little dung bee ( Syritta pipiens ), this mating takes a maximum of five seconds . The males of other species fly to the females from a perch . Sometimes there is also real dogfights between the males for a female. The males of the daffodil fly ( Lampetia armipes ) and some other species have rear legs specially designed as clamp legs with which they can grip and hold the female.

The eggs are laid near a food source for the later larvae, which can vary widely (see below). The females of the species Eristalis tenax , for example, are attracted to the smell of liquid manure because their larvae live in heavily polluted puddles. The appearance of the hoverfly larvae also varies greatly. There are hoverfly larvae with or without thorns, with stubby legs or a telescopic breathing tube ( rat tail larva from Eristalis tenax ). The latter is particularly the case with species that live in very moist soil, in tree saps or in water . The larval time lasts about 8 to 14 days; then the larvae pupate. Hatching from the barrel doll takes place without the help of a forehead bladder (ptilinum). Species with only one annual generation are followed by a summer or winter dormancy, which is absent in species with several (up to five) generations.

Lifestyle of the larvae

Unlike the adult animals ( Imagines ) is the lifestyle of the larvae varied. They differ mainly in the choice of food and are designed accordingly. Overall, the hoverfly larvae can be divided into three ecological categories.

Many species are aphid eaters as larvae , although the specificity is relatively poor. The Pipiza and the Cnemodon species prefer wax-secreting lice, while the Syrphus species , for example, avoid them. A further selection has not yet been documented. Xanthrandus comptus and Syrphus tricinctus not only eat aphids, but also suckle larger caterpillars from butterflies and sawfly ( anal caterpillars ). Mesembrina species hunt for the larvae of other flies in the dung and Syrphus nigritarsis larvae eat the eggs and later also the larvae of specific leaf beetles . About 100 species in Central Europe are Blattlausjäger and hunt at dawn after their prey, which they with the powerful mouthparts grab and suck. A larva sucks up to 100 aphids per day.

The Volucella species are at least partly predatory as larvae in the nests of bumblebees , hornets and wasps , partly from vegetable waste and partly from their "hosts". The nudibranch-like Microdon species often live in the vicinity of ant burrows . You will not be attacked there.

A second group consists of species that feed on plant sap and plant debris. They are often miners and sap slurpers . The daffodil fly ( Lampetia armipes ) and the spruce resin fly ( Cheilosia morio ) belong to this group . This also includes the larvae of the Chrysogaster species in moist soil and Microdon , Chrysotoxum , Mallota , Cerioides , Zelima , Spilomyia and Ferdinandea species in moist wood flour or mulm. Temnostoma vespiforme lives in self-made “ milled ” passages of rotten birch trunks .

Finally, Brachypoda bicolor and Eristalis tenax eat mud and detritus in very moist soil and in manure puddles. (The larva of Eristalis tenax lives in heavily polluted puddles of water and represents a pointer organism for these hypertrophic waters.) Rhingia species and the little dung bee ( Syritta pipiens ) live in the feces of various mammals ( coprophagia ).

The hover flies are monophyletic taxons . The phylogenetic classification takes place in the cover slip (Cyclorrhapha) and here in the Aschiza . The sister group are the eye flies (Pipunculidae), with which they form a common taxon of the Syrphoidea.

Hoverflies include around 6,000 species worldwide. In Europe, about 500 of which are common, including the following:

The oldest fossil evidence of a hover fly comes from Cretaceous Siberian amber . Finds from tertiary deposits are not uncommon, especially as inclusions in the Eocene Baltic amber , from which representatives from at least 18 genera have been identified.

Commons : Gallery page about the mimicry of hoverflies  - album with pictures, videos and audio files