The compound eyes of a hover fly 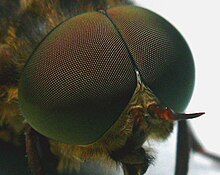 The compound eye or complex eye or oculus compositus (plural oculi compositi ) refers to the type of eye that is often found in arthropods , in which one eye is made up of several, in certain insects such. B. the dragonflies even composed of tens of thousands of ommatidia (individual eyes). The insect can thus compose a picture of its surroundings from individual pixels. 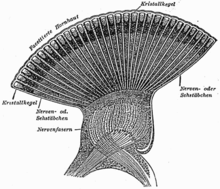 The compound eyes are located on both sides of the insect's head. That is why they are sometimes called "side eyes". The position of the two eyes differs from species to species and can also vary between the sexes. If they are separated from each other, we speak of a dichoptic arrangement. If the compound eyes touch in the middle, the arrangement is called holoptic , which is especially common in male flies .

A compound eye has a honeycomb-like pattern and is therefore sometimes also called a "mesh eye". It consists of a number of individual eyes, the ommatidia (singular: ommatidium ). Compound eyes are mostly approximately hemispherical, which causes each of their ommatidia to look in a slightly different direction. Depending on the lifestyle, compound eyes have different sizes. Fast-flying species like dragonflies have up to 30,000 ommatidia per eye. In these and predatory species, they make up 70 to 90 percent of the head area. An image point is seen with each individual eye (ommatidium). In the case of insects, they are rigidly connected to the head capsule and cannot be moved like the eyes of humans.

The number of individual eyes within a compound eye differs from species to species, sometimes also within the sexes of a species. In the glow- worm genus Lampyris z. For example, females have only 300 ommatidia per side, while males have up to 2500. In the June beetle , females have 2700 per side, males 3700. This difference mostly arose from the fact that the males had to seek out the females when mating. The parasitoid wasp Megaphragma mymaripenne , one of the smallest insects known to date (0.2 mm body length), has an average of only 29 facets per eye.

Structure of an ommatidium

The dioptric apparatus of the single eye is made up of a chitin lens and a crystal cone underneath. The chitin layer of the ommatidium forms the chitin lens ( cornea ) (A) through which light falls into the eye. Then it falls through the crystal cone (B). In some species the crystal cone is made up of cells, in others it is an extracellular mass separated by some cells. This crystal cone guides the light to the eye rods ( rhabdom ) (E). The rhabdom consists of rhabdomeres , the respective microvilli fringes of the eight to nine photoreceptor cells (F). The rhabdomers form the light-sensitive part of the visual cells and contain visual pigments . At the inner end of the individual eye, the nerve fibers (H) of the downstream neurons begin , which transmit the perceptions to the brain . If light falls on the rhabdom, the visual cells depolarize and transmit the signal to the axons that are typical for nerve cells .

There are three different types of compound eyes, which differ from one another in terms of structure and neural circuitry:

A compound eye with continuous pigment cells is called an apposition eye . This means that the ommatidia are completely separated by pigment cells without any gaps. This means that the insects can see a clear picture. But the light only reaches the ommatidium that belongs to the lens through which it came in. The remaining light is swallowed up by the pigment cells. Therefore the eye is not suitable for nocturnal insects (such as nocturnal Lepidoptera), but for daytime insects.

In apposition eyes and optical superposition eyes , the eight rhabdomers of an ommatidium are fused into a single rhabdom in the center. In optical superposition eyes, which are mainly found in crepuscular and nocturnal insects (e.g. nocturnal butterflies ), the pigment cells around the individual ommatidia can be shortened depending on the incidence of light. If it is dark, the pigment cells retreat towards the lens and the incident light can also fall on the rhabdom of a neighboring ommatidium. However, the increased light intensity is associated with a strong reduction in resolution . 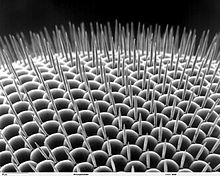 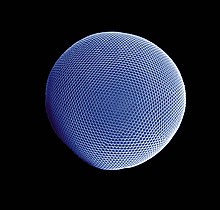 The compound eye of the Antarctic krill ( Euphausia superba ), a type of crustacean

The spatial resolution of the compound eye is limited by the number of pixels and is therefore much lower than, for example, the resolution of the human lens eye . In addition, the sensitivity of the compound eye is low and decreases sharply with increasing resolution, i.e. more and thus smaller facets. This is due to the principle, since the light emanating from an object point is ideally only guided by a single one of the tiny lens surfaces (e.g. 0.001 mm²) onto a sensory cell, while in the lens eye the light emitted by the entire lens opening (up to 40 mm² in humans) received rays of an object point are effectively concentrated on a few sensory cells.

In contrast, the temporal resolution of compound eyes can be much higher. For fast-flying insects with a neural superposition eye, for example, it is up to over 300 images per second, which corresponds to five times the human eye's approx. 60 to 65 images per second. With an apposition eye, the temporal resolution is around 80 frames per second. In contrast to the apposition eye, in the neural superposition eye the signal from the photoreceptor cells is not only forwarded by downstream neurons, but directly evaluated and only the change in the signal is reported, which enables the high frequencies of flicker fusion. (The derivation of the depolarization is passed on mathematically, with less light the downstream neuron hyperpolarizes, with more light it depolarizes. The voltage is opposite to the potential of the sensory cell.) With this data reduction, the signal can be processed faster and more effectively than with the apposition eye , in which downstream neurons imitate the signal from the receptor cell directly.

The high temporal resolution can be evaluated for moving objects in the downstream brain to a far higher spatial image resolution than would correspond to the optical resolution limited by the number of facets. (This possibility also makes moving television images appear far sharper to humans than they actually are in the still image.)

Furthermore, animals with compound eyes have a much larger field of vision than those with lens eyes. This is due to the fact that, in principle, every single facet arranged over a wide viewing angle achieves the same resolution . In the case of a lens eye, a sharp image is limited to the center of the image and becomes increasingly blurred towards the edge of the field of view.

In many insects, the compound eyes are supported in their function by three point-shaped light sense organs, so-called ocelles - but these are primarily used to readjust the internal clock .

The oldest fossil occupied compound eyes consist of a few ommatidia and come from trilobites and small, in Orsten preserved arthropods from the Burgess Shale -type deposits , whose age is 520 to 500 million years. The oldest "large" compound eyes, each with more than 3000 ommatidia, are 515 million years old and were recovered on Kangaroo Island , Australia.

Designs of the eye