This article is about pollination in plants. For dusting in printing technology, see powder gun .

A bumblebee drinks nectar in the flower of a snapdragon and unknowingly dusts the stigma with the pollen from another snapdragon flower that adheres to it .

The pollen is transmitted either by the wind or by animals visiting flowers, usually insects . The very resistant pollen grains can be found in deposits up to 270 million years old, and their free distribution by the wind still outweighs that by animal pollinators.

Mountain Pine , a naked one.
At the bottom left male flower with pollen sacs (yellow), at the top female flowers (pink), in the middle cones that have arisen from a female flower 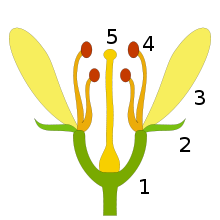 Schematic representation of the flower of a flowering plant:
1. flower base
2. sepals
3. petals
4. stamens with pollen sacs
5. pistil with thickened stigma

In the case of the Bedecktsamern, the pollen grains are transferred to the stigma of the ovary by the wind, by animals or rarely by water (in the case of aquatic plants). In addition to the vegetative or pollen tube cell, the pollen grain usually contains one, and in some plants two sperm cells. The pollen grain germinates by absorbing moisture, and the pollen tube grows to the ovule in the ovary, where it usually penetrates through the micropyle. If the pollen grain only contained one sperm cell, it divides after germination so that there are always two sperm cells. In the ovule is the embryo sac , which usually consists of seven cells, including the egg cell and the central cell. Now double fertilization takes place (which only occurs in the bedecktsamern): One of the sperm cells fertilizes the egg cell, the other the central cell. While the embryo emerges from the fertilized egg cell (zygote), the fertilized central cell develops into a nutrient tissue, the endosperm .

A honey bee on a peach blossom

Wind flowering or anemophilia is the evolutionarily original form of pollination. It requires large amounts of pollen and easy access to the ovule or stigma. The pollen grains are small and light, have a more or less smooth surface and are in the form of fine, dry dust.

In the case of animal pollination ( zoophilia ), the plant must draw the pollinator's attention to its flowers, achieve the uptake of the pollen and its release to the stigma, and through "rewards" ensure that the pollinator performs these tasks regularly. It attracts the pollinator's attention primarily through optical and chemical stimuli: color and fragrance. The nutrient-rich pollen, which is offered in excess in such cases, or nectar serve as rewards .

The flower colors visible to humans are mainly based on water-soluble dyes in the vacuoles and fat-soluble dyes in the chromoplasts . The vacuoles are mainly anthocyanins or betalaines , which mostly appear red, pink, purple or blue. Orange and yellow carotenoids are found in the chromoplasts . The color of the plastids depends on which pigments are formed, while the pH value is decisive in the aqueous environment of the vacuoles : The organic acids such as malic acid and citric acid that are always present in vegetable juices cause a rather red color, while over the roots absorbed basic minerals produce a rather blue color. Pollinating insects such as honeybees and bumblebees hardly react to red, but very much to the ultraviolet which is imperceptible to humans and which is also based on pigments in the vacuoles.