Of peach ( Prunus persica ) is a species of the genus Prunus within the family of Rosaceae (Rosaceae). Its fruits are called peaches and belong to the stone fruit .

The peach is a tree that reaches heights of 1 m to 8 m. Its branches are straight and bare. Young twigs are red on the sunny side and green on the side facing away from the sun. The long shoots have an end bud . Side buds are usually present in three leaf axils , at least with strong long shoots . The buds are hairy.

The alternate arranged leaves are divided into petiole and leaf blade. The petiole has a length of 1 cm to 1.5 cm. With a length of 8 cm to 15 cm and a width of 2 cm to 4 cm, the simple leaf blade is lanceolate with a broad wedge-shaped blade base and a pointed to long pointed upper end. The leaf margin is usually double and more or less finely serrated. The widest part of the leaf blade is in the middle or slightly above. The top and bottom of the leaves are dark green and bare. The leaves are folded in the bud position .

The flowering time is in Central Europe in April. The mostly single flowers are very short stalked or almost sessile. They are surrounded by bud scales at the base and unfold before the leaves. The hermaphroditic flowers have a diameter of 2.5 cm to 3.5 cm and are radially symmetrical and five-fold with a double flower envelope . The flower cup is bell-shaped, length and width are approximately the same. The five sepals have entire margins and are woolly hairy on the outside. The five mostly deep, rarely pale pink petals are up to 2 cm long, oval and usually with entire margins. The approximately 20 mostly reddish, rarely yellow stamens are slightly shorter than the petals.

The mostly spherical stone fruit has a diameter of 4 cm to 10 cm and a longitudinal furrow. The skin of the fruit is pale green or yellow, reddish on the sunny side and often covered with velvety hair, but still smooth. The “ pulp ” is juicy, thick and pale green or orange.

The inside of a peach stone

The mostly almost spherical stone core has a thick shell, deep furrows and is very hard.

There are white, yellow and red-fleshed varieties and among them are those that dissolve stones ("Freestones", "Core donors") and non-stone-releasing ("Clingstones", "Durantien").

There are numerous types of peach (selection):

The name "Weingartenpfeach", which is also used but is improperly, is not permitted in Austria because it is a registered name.

The nectarine ( Prunus persica var. Nucipersica (Suckow) CK Schneid. ) Is also a variety or mutation of the peach with a smooth skin and on average smaller fruits. There are also numerous varieties of this.

A newer hybrid is the Nectavigne . This is the result of a cross between nectarine and the 'Lyonaiser Weinbergpfeach'.

Peaches are vernalized and therefore need several hundred hours of winter cold to thrive. On the other hand, the early flowering (in Western Europe as early as March) can be affected by late frosts. Winter rain favors fungal infestation by Taphrina deformans ( curl disease ), which is why peaches are rarely grown in Europe without the use of fungicides. In Central Europe , the flowering time is in April, and the peach is mainly grown in wine-growing areas . The peach is multiplied mainly by budding .

In most regions in Central Europe, juicy, aromatic peaches can in principle only be harvested in your own garden. Exceptions are wine-growing areas such as Rheinhessen, which also have commercial peach plantations. The purchased peaches are usually taken from the tree while they are still hard so that they can survive the transport. However, such fruits do not ripen completely and the typical peach aroma is not as pronounced.

Peaches need to be pruned regularly, otherwise they will become bald from the inside.

The main growing areas for peaches in Europe are Italy, Greece and Spain.

“Žganica” (Schganiza), a type of rakia or fruit brandy made from peaches, made in Međimurje , northern Croatia

Large proportions of peach fruits are marketed fresh as fruit . Peaches in halves or carving are a common form of canned fruit . The kernels are removed from the shell, processed into Persipan and used in the flavoring of spirits .

There are also some descriptions of the medicinal uses of the peach. For example, Hildegard von Bingen recommended the unripe fruit including the kernels, the leaves, the roots, the resin and the bark for external use for watery eyes, headaches and gout . The semen can be poisonous in large quantities because it contains about 6.5% prussic acid- releasing amygdalin . The leaves contain a related hydrocyanic acid glycoside.

The rubber-like excretion of the fruit was used as an adhesive in some areas until synthetic glue was produced.

Peach blossoms of a double-flowered variety

According to genetic research, at least 6000 BC Began with the expansion of the peach through breeding selection in southern China , where its culture since 2000 BC. Chr. Is handed down. It then came to Greece via Persia and subsequently to Central Europe through the Romans.

The word "peach" (first used in Nuremberg in 1482) for the tree, which probably came from China and came to Europe via Persia, and its fruit comes from the Middle High German pfërsich (from phërsich ) from vulgar Latin persica or persicus . The “Persian apple” ( Latin malum persicum , to Persicus “Persian”) originated from synonymous ancient Greek μῆλον περσικόν mēlon persikón from περσικός persikós (“Persian”), this from Περσίς Persís (“Persia”).

In Christological symbolism, the peach stands for the Trinity (due to its three-part division into meat, stone and seeds).

In China , the peach is a symbol of immortality. In Taoist mythology, the Queen Mother of the West ( Xiwangmu ) grows the fruits in a remote mountain valley, where they only ripen every thousand years. A famous work by the poet Tao Yuanming is entitled The Peach Blossom Spring and tells of an ideal society far away from civilization. In addition, various sexual connotations are associated with the image of the peach. 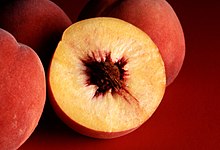