Central Europe or Central Europe is a region in Europe between West , East , Southeast , South and North Europe . Geographically, there are no clear criteria that could be used for delimitation.

The term “Central Europe” can also be defined politically , historically or in terms of natural space . In addition, the conception of the term is subject to historical and political change. Central Europe cannot therefore be clearly defined, but the question has received greater attention since the fall of the Iron Curtain and the end of the Cold War .

In the geographical delimitation, climatic and natural conditions (for example vegetation types or tectonic phenomena) can be used. The natural sciences define the oceanic to subcontinental, moderately warm major climate as a criterion. A rough demarcation of Central Europe is the Rhine in the west and northwest , the North Sea and the Eider (or alternatively Skagerrak / Kattegat ) and then the Baltic Sea in the north . In the east the Vistula and Eastern Carpathians are ideal , in the southeast the lower reaches of the Danube , in the south the Drava and the Central Alps . But there are doubts as to whether rivers such as the Eider or the Vistula are sufficient to define a subcontinent. In any case, the geographical division remains blurred.

Religious demarcation to the east and south-east

Before the Second World War , and even more clearly before the First World War , Central Europe was religiously delimitable. In Central Europe, in addition to Jewish minorities, the Catholic and Protestant denominations of Christianity were almost exclusively represented. To the east and south-east, this cultural area encountered Russian Orthodox and Greek Orthodox creeds and the Islamic of the Bosnian-Herzegovinian Muslims.

From a widespread German point of view, there are no doubts that Germany , Austria , Switzerland , Liechtenstein , Poland , the Czech Republic , Slovakia and Hungary belong to Central Europe. Almost all bordering states have leeway with regard to affiliation. Depending on the point of view and selection criteria, they are wholly or partially counted as part of Central Europe or other parts of the continent. In this respect, Slovenia is often included, as well as Luxembourg , Croatia , Estonia , Latvia , Lithuania , Romania , Belgium and the Netherlands . Conversely, northern Germany is sometimes also viewed as part of northern Europe in the natural (shaped by the last glacial period ), historical and architectural context .

Often the peripheral areas cannot be clearly assigned due to the multiple influences of several regions and are assigned depending on the intention or " feeling of home ". Today, the location of a country (partly) in “Central Europe” is often intended to indicate an actual or intended proximity or affiliation to other large areas such as the European Union . 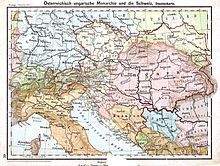 The Austro-Hungarian Monarchy in 1899

In Austria and Northern Italy , especially in Friuli and Trieste , the common delimitation is partly different than in Germany: Central Europe is equated there with the successor states of the former Austro-Hungarian monarchy . Regions such as the Baltic States and the North German-Polish plains are perceived as "Northern European", other parts of Germany as "Western European". Usually, neighboring southern and central German regions, such as Bavaria, Franconia, Thuringia and Saxony, are also viewed as part of Central Europe because of their cultural affinity with Austria and Bohemia. Overall, Central Europe is still further southeast than in the usual view in Germany. The city of Trieste expressly sees itself as a città central Europe . In western Austria and Switzerland, which also has parts of the country on the southern side of the Alps, Upper Italy is also seen as Central European, with the closely connected South Tyrol and Trento , but also cities such as Turin , Milan and Venice . The definition of the main Alpine ridge as the southern border of Central Europe is seen here as a one-sided German perspective.

In today's English-speaking world, a distinction is often only made between Eastern and Western European countries. The countries east of central europe as Central Europe called. The states of West Central Europe (Netherlands, Germany, Switzerland, Liechtenstein, Austria) are included in Western Europe ("Western Europe"). This classification is also used by the United Nations Statistical Office, which divides the European states into Eastern, Western, Southern and Northern Europe. Germany, Austria and Switzerland together with France and the BeNeLux states form Western Europe, the states of Eastern Central Europe are merged into Eastern Europe. This sharp east / west division takes into account the cultural-historical rivalry that arose between the Baltic Slavic and Germanic cultural complexes in the course of the migration of peoples and was accentuated in the east-west conflict . At the latest with the eastward expansion of the EU , the dividing line between Central Europe and Western Europe lost its sharpness, but is still present in the political field (see also: Visegrád countries ).

Occasionally, cultural and religious criteria are used to delimit Central Europe, more precisely: the predominance of the Roman Catholic faith . This “border” would therefore run through the roughly equally Catholic and Protestant states of Germany and Latvia and demarcate itself from Eastern and Southeastern Europe to the Orthodox creed ( Belarus , Ukraine , Romania , Serbia ), partly (with Bosnia and Herzegovina ) also to Islam . A demarcation of Central Europe to the west and south can hardly be made with this approach. With the Central European term or the definition have already u. a. Milan Kundera , Robert Musil , Alexander Gieysztor , Ferenc Feijtö and Jacques Le Rider . On the homepage of the Italian Associazione Culturale Mitteleuropa , “Central Europe” is associated with a special lifestyle, which is expressed, among other things, in the fact that one lives more in the house or in the coffee house than on the street, that one uses butter for cooking, or that one Christmas celebrate on the evening of December 24th.

The first Central Europeans are counted as Homo heidelbergensis , who immigrated from the south over half a million years ago. About 200,000 years ago, through adaptation to the extreme ice age living conditions, he developed into a Neanderthal who inhabited Central Europe until about 30,000 years ago.

In the period of the subsequent cold peak up to around 20,000 years ago, Central Europe remained largely deserted. The settlement by modern humans ( Homo sapiens ) took place in the period from 36,000 to 10,000 years ago by hunter-gatherer societies, which probably followed the large herds of animals of the cold steppes of that time and came from Central Asia. They are known as Cro-Magnon people .

Both the Neanderthals and the Cro-Magnon can be identified in the genome of today's European population. However, neither are the main ancestors of modern Europeans. It has not yet been conclusively clarified which people are the actual ancestors of today's population. At least one previously unknown phenomenon in demography must have taken place. For example, “sudden” successful genetic changes such as the replacement of lactose intolerance in the last 6000 years or further waves of migration of Stone Age hunters and gatherers from the east come into question. The genetic examination of the genetic material of the bone fragments of 22 representatives of later hunter-gatherer societies from Russia, Lithuania, Poland and Germany ( Swabian Alb ), who lived 15,000 to 4,300 years ago, shows that they represented a very homogeneous, uniform group. Most of today's Europeans descend from them.

About 7,500 years ago, very few immigrants from the Middle East brought the new farming and livestock farming methods to Central Europe, which quickly became established except for the cultures in the North Baltic Sea region ( funnel cup culture ). Their culture is called ribbon ceramics . According to more recent research results in palaeogenetics, however , these ( Neolithic ) were genetically only to a very small extent involved in the development of today's Central Europeans.

History of the term Central Europe

The term Central Europe was initially a political term, but it served different purposes. It came up in the middle of the 19th century, when Constantin Frantz proposed a federation “Central Europe” from Germany, Poland and Danube Slavs to create a counterweight to the great powers Russia and France. Similar ideas were also widespread in the National Liberal Party , for example with Friedrich List and Heinrich von Gagern , who propagated a German-Austrian-led Central Europe from Hamburg to Trieste .

At the same time - before 1871 - the term also became important in Austria-Hungary : as an alternative to the Greater German solution propagated by many in Germany and Austria , which provided for all Germans - and only these - to be combined in one state. In Austria this was rejected by a majority, as it would have meant breaking up the multi-ethnic state of Austria-Hungary. The Austrian government therefore proposed the “Central European solution” to the German question as an alternative : the amalgamation of Germany with all of Austria-Hungary to form a “70 million empire” ( Greater Austria ).

In fact, in 1871 the "small German" Bismarck German Empire was founded. As a result, there was a final split in the conception of the Central European idea into a German and an Austrian variant. While the German variant sees Central Europe as “the earth that has been raised to its current bloom under the leadership of German culture within the framework of a world view”, from the Austrian point of view Central Europe was seen as an organism that had grown within the framework of the Habsburg Monarchy .

After the Second World War , the term lost some of its meaning, as Europe was now divided into Western and Eastern Europe during the Cold War. According to this dualistic nomenclature, the western states of Central Europe were counted as Western Europe and the eastern states as Eastern Europe. However, the term Central Europe was often and gladly used when one wanted to thematize the division of Europe into the two blocks; this division ran through the "middle of Europe". This term also had its meaning in connection with polemic slogans such as “Central Europe is a powder keg” - an allusion to the extremely high inventory of atomic bombs in East and West Germany. This was also reflected in the Central European debate, which was about the future of Germany, either as a NATO member or in neutrality.

After the end of the Cold War , the term now served to establish identity for the states of the former Warsaw Pact , which were designated as Eastern European during the Cold War , in particular for Poland, Hungary and Czechoslovakia, which was peacefully divided into the Czech Republic and Slovakia, and with the breakup of Yugoslavia for Slovenia and Croatia. In this respect, the political spatial understanding of the term Central Europe changes again to a greater extent towards the east. 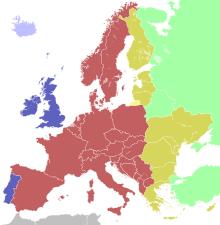 The Central European Time Zone, which is generously delimited to the west (red)

The following countries belong to the Central European Time Zone (CET) in Europe:

The time is based on the local time of the 15th meridian, which runs roughly on the border between Germany and Poland. Since the earth is divided into 24 time zones, the western border of the CET would normally be roughly on the border of Germany and the Netherlands. Nevertheless, the states of France and even Spain, which are located much further to the west, also belong to this time zone. This generous division leads to clear geographical differences in the individual perception of the time of day .