This article deals with population science - to examine the structure of society see social structure analysis .

The demographics, demographics ( ancient Greek δῆμος démos , German 'people' and γραφή manuscripts , correspondence, description 'or γράφειν Graphein , write (be-)') or demography is a science that statistically and theoretically with the development of populations and deals with their structures. It examines the age and numerical breakdown, the geographical distribution and the environmentally -related and social factors that are responsible for changes. The research of regularities and laws in the state and development of the population is recorded and measured primarily with the help of statistics , for which description and explanatory models are developed (see also official statistics ).

Demography consists of four major subject areas that focus on the following theories:

Already John Graunt (1620-1674) and William Petty (1623-1687) had studied the statistical development of birth and death rates with a focus on the people of London, England, in detail in the 1662nd Likewise, the mathematician and political advisor Gottfried Wilhelm Leibniz (1646–1716) dealt with statistical topics on population development. The German statistician and theologian Johann Peter Süßmilch (1707–1767) is considered to be the founder of demography . Sussmilch achieved particular fame through his work The Divine Order in the Changes of the Human Gender , published in 1741 . However, Süßmilch had focused on systematic research and analyzed church and official family registers for decades . He performed calculations e.g. B. on infant mortality rates and the size of populations of a city or region.

The British economist and former pastor Thomas Robert Malthus investigated the relationship between population growth and land yield in 1798 and came to the prognosis that the land yield could only grow in arithmetic progression (1, 2, 3, 4, 5 etc.), but that the population could grow in geometric progression (1, 2, 4, 8, 16 etc.) grow, with the result of hunger and poverty . It was not improvements in production but birth control (for example through abstinence ) that the Pastor Malthus saw as a way of permanently fighting poverty. It was not until John Stuart Mill , in 1848, that this population theory was supported with the Land Yield Act . Neomalthusianism , influenced by Mill, promoted birth control contraceptives , which Malthus had rejected. Your predictions are verified today .

Alfred Lotka is considered to be the founder of modern mathematical demography , who studied the relationship between birth and death rates in 1907 and developed the theory of population equilibrium in 1939.

Demography describes, analyzes and explains (or tries to explain) in particular:

Objects of the investigation can be located in one state . In addition, there are overviews of entire continents or of the world's population , although this is difficult due to the different recording methods . 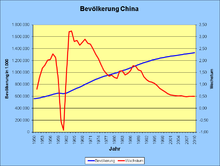 Population development of the People's Republic of China 1950–2007

Population science draws its data from the continuously updated statistics, from samples , surveys and from censuses .

In fertility rate between the combined fertility rate (engl. Total fertility rate (TFR)) and the cohort fertility (engl. Cohort fertility rate (CFR)) differed. The TFR indicates how many children a woman would theoretically give birth in the course of her life if she showed the childbearing behavior that is typical today for women of this age group at every stage of her life. The TFR is criticized because it often does not reflect the actual birth level and changes in fertility behavior can lead to too high or too low a TFR. Therefore, it is common to calculate what is known as the time-adapted TFR, which is believed to better reflect actual fertility. The CFR indicates how many children women of a given age cohort have actually given birth to. It is easier to interpret than the TFR.

For the pre-statistical period (i.e. before 1850), such data are calculated by evaluating church and local family registers and other sources.

Insofar as demographics make forecasts about future population developments, it - like any forecast - is dependent on assumptions, in particular on future fertility behavior, mortality and immigration and emigration. How great the resulting uncertainty and thus also the potential influenceability of population development is depends on the one hand on the influencing factor considered and on the other hand on the aspect under consideration.

If one looks at the aspect of the “total number” of a population, changes in “birth behavior” only have a slow impact on their development, because tomorrow's 30, 50 or 80-year-olds are born today. In addition, the numerical strength of the following generations is determined not only by the birth rate, but also by the strength of the respective parent generation. Would z. If, for example, a permanent birth rate of around 2.1 children per woman is achieved overnight in Germany, the population would only stabilize much later, when the people born today have died - and this at the level of a significantly reduced total population which is determined by the strength of the now fertile generation. Even with higher birth rates, the total population would decline for a long time due to the weak parent generation. The “composition” of the population, such as the number of schoolchildren, students or the old-age quotient , changes more quickly. Other factors, such as immigration and emigration or even wars and epidemics, can influence population growth more quickly.

Since forecasts are an essential part of demographic work, it is necessary to make assumptions about certain factors and try to determine their probability of occurrence. This often requires recourse to other research areas, such as sociology.

The economic theory of fertility by Harvey Leibenstein and Gary S. Becker is considered one of the most convincing theoretical models to explain the globally very different fertility behavior of populations. In particular, the very low fertility rates in developed countries could not be reconciled with older theories.

According to the economic theory of fertility, three different types of benefits for children can be distinguished:

These types of benefits are opposed to two types of costs:

The social-psychological theory of fertility uses a somewhat different terminology than the economic fertility theory, but is conceptually largely congruent with it. In contrast to economic theory, it arises rather from social psychological research. She highlights the following types of benefits for children:

For example, with the abolition of the one-child policy in China, relevant effects could be observed.

The biographical theory of fertility is the demographic equivalent of the individualization thesis. She argues economically, but on the cost side focuses on the biographical opportunity costs of starting a family and largely excludes benefit aspects and direct costs. The core messages of the theory are:

This means: Due to the increasing individualization, the number of CV alternatives for a specific person increases. When starting a family, however, there is a very large biographical determination for a longer period of time, and consequently a large number of life course alternatives are excluded from the so-called biographical universe. This makes it more likely that such a determination will not be made at some point, especially since family decisions can involve greater risks than educational or career decisions. The consequence is that the decision to start a family is always made later or not at all.

The biographical fertility theory is generally regarded as one of the most coherent theses for explaining the low fertility rates in developed societies, because individual conclusions of the theory could at least be empirically confirmed. For example, among women born in 1955, the subgroup of women with three children was more likely to have a fourth child from the age of 32 than the probability of having a first child among women of that year and age who were still childless.

The German-British demographer David Eversley (1921–1995), whose specialty was population forecasting, warned that statisticians would work with models and simulations, but that these assumptions about the future should not be sold as facts. According to him, it is not a matter of prognoses, but of pure assumptions with which current political interests could possibly be pursued. Claims that a future population can be calculated exactly, he called "erroneous belief". “As complex as these models may be, the underlying theses are of dubious validity. Either they are purely mechanical extrapolations of past trends or calculations based on the presumptions of the authors. ”Population projections, according to Eversley, have usually always had a political purpose:“ The history of population projections is therefore never free of ideology , and it is always has to be asked why the prognosis was made, what was the author's real aim? ”He also criticized an uncritical attitude towards the history of their own discipline. “To this day, demographers have largely avoided making internal criticism. While there is a heterogeneity of approaches in other disciplines , disputes about direction and opinion are carried out openly, population science , on the other hand, is dominated by a corps spirit , which is explained not least by the particular closeness to government, by the intimate and never critically questioned relationship to the respective power. "

The Bremen social scientists Gunnar Heinsohn , Otto Steiger and Rolf Knieper have shown in their study “Human Production - General Population Theory of the Modern Era” how demography emerged against the background of the modern state's labor needs. According to these authors, population science initially served the modern state to ensure the reproduction of the population in sufficient numbers through a series of measures, including the extensive criminalization of birth control. According to this thesis, birth rates that are significantly higher than the reproductive rate of 2.1 are, contrary to the basic assumption of many demographers, not natural, but mostly politically produced through population policy. The population policy of the German National Socialist regime of the 1930s was not a historical exception, but was part of the continuity of early modern population policy, which Hitler merely revived and radicalized.