A local family book (formerly also: Orts- or Dorfsippenbuch ) is a secondary source of personal history in which the nuclear families ( father and mother and their children ) are listed together or recorded together on an index card or on a page of a computerized text. In addition, the family is also linked to their genealogy , i.e. for father and mother reference is made to their respective parents and for children to their marriage , provided that such information can be inferred from the sources.

The sources that are used to process a family register are usually the church registers , but also all other personal historical sources of spiritual or secular origin. Local family books can also be used by neighboring communities to edit a local family book. 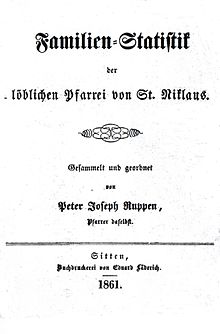 Peter Josef Ruppen (1815-1896), who was pastor in St. Niklaus from 1856 to 1862 , published the family statistics of the laudable parish of St. Niklaus in 1861 , which is the oldest known printed local family book in the world, like the central office for German people and Family history Leipzig knows how to tell. The family names contained in it go back to the turn of the 16th century to the 17th century.

In the 16th century, soul registers in individual places in the German-speaking area, which were only a temporal cross-section of the population in a certain year and which have remained so in some regions (for example in Upper Austria), were transferred to updated family registers . In 1807 the keeping of a family register became a legal obligation in every municipality in Württemberg . From 1920 Konrad Brandner tried to record the descent of the entire population of Styria in a folk genealogy . The Reich sought during the time of National Socialism as part of its blood and soil policy on, for each village a village Sippenbuch issue, and organized the Kirchenbuchverkartung . Unaffected by this political objective, since the 1950s, family history and local history researchers have been editing and publishing an ever increasing number of local family books.

The method of compiling people from church registers by families , the family reconstitution or method Henry , was published in France in the 1950s and has fertilized population history and social history throughout the world.

Practical information for the authors of local family books

Today local family books are usually compiled with the help of computers. Instead of the index card on which each family is entered, genealogy programs offer input masks for the data. The changeability of family names , in particular the fact that married couples can keep their maiden name or the man can now also take the woman's name, possibly also as a double name, and the creation of the registers can cause difficulties. The author of a local family book should fully exhaust the sources in terms of content. Under no circumstances should you exclude certain groups of people (such as non-residents or childless people ), specify the occupations and social status of the people and, if possible, also provide information about ownership and ownership.

The structure of a local family book is largely standardized: The families should usually be sorted alphabetically and then chronologically with respect to a family name.

To back up data, it is always advisable to print out all family data on paper and to deposit them in the German Library and the Central Office for German Personal and Family History in Leipzig.