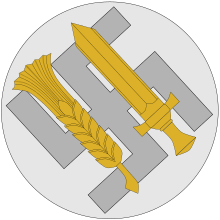 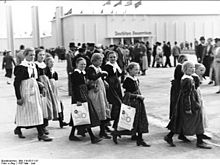 Exhibition of the RNST in Munich: Children's group on the Theresienwiese in May 1937

The Reichsnährstand ( RNST ) was a corporate organization of the agricultural economy and agricultural policy in the German Reich from 1933 to 1945 , which was set up as a corporation under public law ( self-governing corporation ) with its own statutes as well as its own budget , contribution and civil service law and existed until 1948 . Since 1933 the seat of the Reichsnährstand was the later Reichsbauernstadt Goslar . The Reichserntedankfest was celebrated between 1933 and 1937 as the central event on the Bückeberg near Hameln .

The work of the RNST mainly focused on the control of the production, distribution and prices of agricultural products. In addition, the social and cultural concerns of its members were part of his duties.

Ongoing disputes between the RNST and the Gauleiter and the German Labor Front led to an erosion of organizational self-administration over the years. Thus the RNST, which in the polycratically organized National Socialist system of rule operated a policy as a “semi-state” institution, with the beginning of the Second World War more and more became an instrument of the Ministry of Agriculture or the party.

With the takeover of the NSDAP were in the Reich under the leadership of the Reich Farm Leader Walther Darré , who in personal union also at the forefront of the Reich Ministry of Food and Agriculture and the Reich Office of Agricultural Policy was, all the people brought into line the farm at the production and disposal products involved were. Organizationally, this was achieved by subdividing the RNST into rural, district and local peasant communities , each of which was controlled by a peasant leader .

Institutionally, the agricultural cooperatives , market associations and associations were affected by the standardization .

The Reichsnährstand came into being eight weeks after the assumption of office by Walther Darré, who had already successfully built up an " agricultural political apparatus " (aA) extensive in terms of personnel and organization in the Weimar Republic since August 1930 , and his State Secretary Herbert Backe on September 13, 1933 with the " Law on the provisional establishment of the Reichsnährstand ”. In § 2 of the law it says: “The Reich Minister for Food and Agriculture can authorize the Reichsnährstand or some of its groups to regulate the production, the sale, as well as the prices and price ranges of agricultural products, if this takes into account the interests of the economy as a whole and of the common good . ”On September 26, 1933, Darré was authorized in advance to“ set fixed prices for grain ”, and on December 8, 1933, the basic“ First Ordinance on the Provisional Establishment of the Reichsnährstand ”followed, which in 1934 resulted in a differentiated market organization joined in all areas of agriculture .

The National Socialists were now faced with the task of winning over the farmers in the southern German and Catholic areas in order to give their rule a stable base and to realize their blood and soil program . First they succeeded in uniting all well-known farmers 'associations such as the Reichslandbund or the influential association of Christian farmers' associations to form the Reichsführergemeinschaft. With the law on the provisional establishment of the Reichsnährstand all persons and businesses active in agriculture, fishing and horticulture were brought into line and forcibly united in the Chamber of Agriculture . The realm was divided into 26 rural peasant communities. These were subordinate to the district and hierarchically below that the local peasantry with their respective local farmer leaders.

Should be stopped with these measures, the rural exodus . Between 1933 and 1939, agricultural jobs fell by 440,000 to 1.4 million people. Another goal was to control production, sales and prices in the agricultural sector. To a certain extent the regime succeeded in increasing Germany's share of self-sufficiency from 68 percent in 1928 to 83 percent in 1938. There was also an increase in production, but also higher domestic prices of agricultural products compared to world market prices.

The Reichsnährstand was divided into three main departments:

Levels of conflict and transformation processes

Identification of the department

The disputes between RNST and Gauleitungen in January 1935 resulted in the “Deputy Leader”, Rudolf Hess , drafting an “order” on the relationship between the Reichsnährstand and the party. In it, Hess on the one hand forbade "all party structures to intervene in the factual tasks of the Reichsnährstand", thereby focusing on securing the "nutritional basis of the German people". On the other hand, he stipulated: “While the personal influence of the party's sovereigns on the Office for Agricultural Policy as an institution of the party is directly guaranteed, new appointments of local, district and state farmers leaders of the Reichsnährstand should only be made in consultation with the party responsible Gauleiter . ”However, this order did not lead to an end to the competence rioting.

Around two weeks after Darré was finally ousted - at the beginning of May 1942 - Herbert Backe, who also headed the Reich Ministry of Food and Agriculture , on May 16, 1942, placed the Reich and State Main Departments I of the Reichsnährstand under the Reichsamt für Agrarpolitik, both personally and institutionally and the subordinate district offices for agricultural policy, which amounted to a final dismantling of the original structure of the RNST and a transformation of it into a purely food-political apparatus. From then on, the NSDAP took over the basic agricultural policy, and the blood-and-soil apologists and agrarists thus fell under the party's direct area of ​​responsibility.

The Reichsnährstand survived the German defeat in 1945 and was initially not dissolved in order not to worsen the supply situation (especially in the famine winter of 1946/47 ). In addition, the Nuremberg War Crimes Tribunal did not classify it as a “criminal organization” (under “Law No. 1 to Repeal National Socialist Laws of the Allied Control Council”). In the American-British occupation it was only dissolved on January 21, 1948. The transition took longer: until 1961 the assets and until 1973 the applications of the displaced beneficiaries of the Reichsnährstand were processed. The Reichsnährstand only came to a legal end when the Reichsnährstands-Liquidation Act was repealed on April 13, 2006.

Book on farm research and clan research in the Peine district , published by the administration office of the Reich Farmer's Guide, Goslar 1938.

Published by Karl Marquis in Goslar, published by Reichsnährstand-Verlagsgesellschaft mbH, Berlin from 1935 with constantly expanding editions: