Exhibition of works by the German Labor Front (1933)

Dortmund Monument for the DAF during National Socialism (1935)

DAF exhibition “Healthy Living, Happy Creation” (1938)
corruption of the song Brothers, about the sun, about freedom with baiting Jews

The German Labor Front (DAF) was in the era of National Socialism of the unit association of workers and employers based in Berlin (from 1935 in the service building Hohenzollerndamm in Berlin-Wilmersdorf ).

The DAF was on 10 May 1933 after smashing the Free Trade Unions founded. Their assets were confiscated in favor of the DAF and the right to strike was abolished. All professional associations of white-collar workers and workers were amalgamated with the law regulating national labor of January 20, 1934; the DAF was by far the largest Nazi mass organization. In October 1934 the DAF was officially affiliated with the NSDAP . It was organized according to the leader principle down to the block warden and was subordinate to the Reich organization leader of the NSDAP Robert Ley , who acted as "a kind of trustee of the national community ". Instead of representing the interests of a trade union, workers and entrepreneurs were educated in line with the Nazi ideology. Divided into 18-over operation Communities (later 16 professional offices) and 33 Gauwaltungen , the DAF was until May 1945 last 22 million members. Only those who were able to work had value; Excluded were all people who were classified as “Jews” or “Jewish first-degree mixed race” according to Nazi criteria and who were considered “of minor race” or “incapable of community” for other reasons. Work in the form of forced labor was also part of the persecution practice.

The purpose of the DAF

The DAF was supposed to integrate the German workers into the new “ Third Reich ” and thus undermine their previous organizations. Before 1932 the National Socialist Company Cell Organization (NSBO) had little success. Many former supporters of the Strasser wing were still anti-capitalist in 1933 and demanded that the NSBO ​​be turned into a National Socialist union. After the Reichstag elections in March 1933 , Hitler gave Robert Ley the task of ending the wild activities of the NSBO ​​and smashing the free trade unions. In an action planned by the general staff, after the celebrated Labor Day on May 2, the SA and SS occupied the trade union houses throughout Germany and took the leaders of the larger trade unions into " protective custody ". In contrast to the trade unions, the employers' associations were able to maintain their organized independence.

The DAF acted as a “national community service provider” to German “Volksgenossen” in a variety of ways. Although every employee had to have a work book as a check and a compulsory contribution averaging 1.5 to 2 Reichsmarks was deducted directly from the payroll, the workers and employees affirmed the DAF. When unemployment fell from 4.1 to 2.3 million between December 1933 and November 1934, the fear of losing one's job began to subside. The associated psychological upgrading of work was the counterpart to the actual disenfranchisement of workers. Initial attempts by the DAF to formulate labor and collective bargaining claims met with resistance from the employers. In June 1933 “ Trustees of Labor ” were appointed who were under the supervision of the Reich Labor Ministry. You should decide on the collective bargaining and company regulations as well as arbitrate in disputes. In November 1933, Robert Ley had to sign the “Appeal to All Working Germans” together with Reich Labor Minister Franz Seldte , Reich Economics Minister Kurt Schmitt and the party commissioner for economic issues Wilhelm Keppler . "This finally buried all hopes for professional or trade union interest representation or competencies in labor and social policy through the DAF." Thereupon the "leader" of the "Reichsstandes der Deutschen Industrie" Gustav Krupp von Bohlen and Halbach announced the following day his approval of entrepreneurs joining the DAF.

On October 24, 1934, Hitler signed an ordinance presented by Ley:

“The aim of the German Labor Front is the formation of a real people and performance community of all Germans. It has to ensure that each individual can take his place in the economic life of the nation in the mental and physical condition that enables him to achieve the highest possible performance and thus guarantees the greatest benefit for the national community "

On August 29, 1936, the performance struggle of German companies was launched by the DAF's social responsibility department . This "performance struggle" served to award "National Socialist model companies". From year to year the criteria were more and more geared towards the conversion of the companies to arms production.

In 1943, the German Labor Front, the performance struggle department of German companies, asked the Chamber of Commerce for an award for Opekta Cologne

From the headquarters in Potsdamer Strasse in Berlin, the DAF directed various sub-organizations that were responsible on the one hand for the welfare and on the other hand for controlling the workforce (selection of sub-organizations):

The DAF was the financially strongest organization of the “Third Reich”, it had “an extensive complex of very profitable companies”, which “in terms of sales came close to the world's largest chemical company at the time, IG Farbenindustrie ”. The group of companies included many union-owned companies that were expropriated as part of the Gleichschaltung, as well as start-ups. In the insurance sector, these were Volksfürsorge , Deutscher Ring and Deutsche Leben . In the banking sector, the Bank of Workers, Employees and Officials should be mentioned, which on October 31, 1933, was renamed Bank der Deutsche Arbeit . Also the bank of the Christian DGB , which later renamed the National Bank, the Deutsche Volksbank , the bank of the Deutschnationalen Handelsgehilfen -Verband (DHV), the German Employees Association Sparkasse (DAVS) and many smaller banks (e.g. the Deutsche Werkmeister- Sparbank AG, Industriebeamten-Sparbank eGmbH, Deutsche Wirtschaftsbank or the Bank for German Labor and Sparbank von 1820 AG) became the property of DAF. While the National Bank was sold over the years and converted into a regional bank, the other bank holdings were transferred to the Bank der Deutsche Arbeit in the 1930s.

DAF's publishing business was also essential. The most important publishers were the two publishers taken over by DHV, Hanseatische Verlagsanstalt (HAVA) and Langen Müller Verlag . From 1936 the newly founded publishing house of the German Labor Front (Zentralverlag) increasingly assumed the most important role of the three major publishers of the DAF. The publisher Otto Karl Stollberg published the newspaper “Der Deutsche - the daily newspaper of the German Labor Front” for the DAF .

On May 28, 1937, the DAF, as part of its sub-organization “Kraft durch Freude” (KdF), founded the Society for Preparation of the German Volkswagen mbH (GeZuVor) , which in May 1938 was renamed Volkswagenwerk GmbH . The company headquarters was in the house of the German Labor Front in Knesebeckstrasse 48/49, Berlin W15 ( Charlottenburg ). The Reichsheimstättenamt administered the housing and settlement construction. For the training of its functionaries, the DAF maintained a number of training centers, the Reichsschulungsburgen . The joint venture of the German Labor Front ( GW ), which essentially consisted of former consumer cooperative establishments, took over the business operations of the consumer cooperatives and their major purchasing companies on April 1 , in accordance with the ordinance on adapting consumer cooperative institutions to the wartime economic conditions of February 18, 1941 . 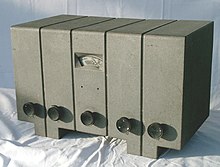 The German Labor Front also had a radio receiver developed: the German Labor Front Receiver DAF1011, the name of which was to commemorate a speech by Hitler in the Siemens factory in Berlin on November 10, 1933. Compared to the Volksempfänger VE301, it is a more complex, multi-circuit straight-ahead receiver with a powerful output stage. The device was designed for the collective reception of radio broadcasts in companies and communities, the DAF promoted it with the slogan radio in all companies .