Springer Science + Business Media SA , headquartered in Luxembourg and with an operational head office in Berlin and Heidelberg, is an international science publisher for books, magazines and online media. After Elsevier Springer is the second-largest publisher worldwide in the field of science , technology and medicine (Engl. Science, technology and medicine; short STM). In addition to medicine, mathematics and computer science , life sciences, humanities, economics, management topics and technology are some of the areas in which the publisher has an important position. Publishing locations are u. a. in Berlin and Heidelberg, Basel (Switzerland), Dordrecht (Netherlands), New York City (USA), Beijing (China), Vienna (Austria), Paris (France), Milan (Italy) and New Delhi (India).

History of the publisher

Aryanization of the publishing house during National Socialism 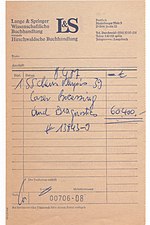 During the National Socialist era , the publishing house was “ Aryanized ” and Tönjes Lange was appointed as the new boss. For a long time, the Springer family had been appointed as general representative in 1934 and had previously managed the Springers' Hirschwald bookstore. He was loyal to the family. The National Socialists could not simply close the publishing house because the income from exports was significant. The company Lange & Springer built up a library service since 1941, which has since been taken over by EBSCO Information Services . After the end of the war, the grandchildren Ferdinand Springer junior and Julius Springer d. J. take over the publishing house again.

The property at Neuenheimer Landstrasse 24

The pre-war Berlin location at Linkstrasse 23-24 between Potsdamer Platz and Reichpietschufer had been largely destroyed. The current Berlin publishing house at Heidelberger Platz 3 was moved into in 1958.

In 1956, Springer changed his company headquarters in Heidelberg and moved into the Neuenheimer Landstrasse 28–30 property, a modern, simple building with reminiscences of the Bauhaus era.

Development of the publishing history after the end of the war

Subject areas were expanded and publishers bought in

At the beginning of 1982 the Heidelberg publishing house moved into the striking new building at Tiergartenstrasse 17, not far from the university campus in Neuenheimer Feld .

In the history of publishing, publishers have been bought over and over again. There are two branches, some of which have their own program, in New York (1964) and Vienna . In 1983 the publishing house first went east to Japan and then to India and the People's Republic of China . The global orientation was shaped by Heinz Götze , who worked as managing director from 1949 and later as co-owner. His successor was his son Dietrich Götze (with Claus Michaletz and Bernhard Lewerich) in 1992.

Since around 1985 the new media have become increasingly important in the publishing program. Initially, individual titles were accompanied by a CD or floppy disk. Databases and online services are now the common forms of publication. In parallel to the print edition, most magazines now appear online on the World Wide Web . With Lehrbuch-Medizin.de and Lehrbuch-Psychologie.de, the only interactive learning portals for students in German-speaking countries have appeared so far. Since the end of the 1990s, articles with the same text and features of some scientific journals were available to subscribers under the name " online first " even before the subsequent print edition on the web. The proportion of online first magazines increased steadily in the following years. In 1997, as a joint venture between Springer and VDI publisher of the Springer-VDI-Verlag founded.

Around 2005 new forms of journal use developed around the term Open Access Journals , the Springer u. a. with an "open choice model" for authors and Springer Open journals.

The publisher's historical archive has been in the Central and State Library in Berlin since 2009 .

Complete sale of the Springer Group is ratified

In December 2009, the complete takeover of the Springer Group by EQT and GIC was agreed. The sale of the specialist publishing group Springer Science + Business Media SA (Springer) by Cinven and Candover to the financial investors EQT and GIC was confirmed in February 2010. The European and US competition authorities had approved the change of ownership.

In 2013 the publishing house was taken over by BC Partners for 3.3 billion euros.

The Springer Science + Business Media publishing group employs almost 8,500 people in 55 publishing houses in around 25 countries worldwide, around 1,700 of whom are in Germany. Around 300 in Berlin, around 600 in Heidelberg. Over the decades there has been a steady upward trend, which has been more or less constant since the 1990s thanks to the new typesetting and printing techniques . The proportion of scientifically trained employees and the proportion of women are both very high.