New Delhi (English New Delhi ; Hindi नई दिल्ली Naī Dillī ; Urdu نئی دلی; Panjabi ਨਵੀਂ ਦਿੱਲੀ ) is the capital of India , the seat of the Indian government, the parliament and the supreme courts. It is part of the Indian metropolis of Delhi , the third largest metropolitan region in the world with 28.125 million inhabitants (as of 2019). The foundation stone was laid south of the old town of Delhi on December 15, 1911 during the British colonial era . This was to replace the traditional capital, Calcutta . The name of New Delhi was not given to the new district until 1927; its center is Connaught Place .

New Delhi is part of the metropolis Delhi, which as the Delhi National Capital Territory ("National Capital Territory Delhi") is directly subordinate to the Indian central government. In a narrower sense, New Delhi only refers to the government district that was planned during the British colonial era, which only includes a small part of the capital's territory. In everyday parlance, New Delhi is often defined much more broadly. When New Delhi was founded, Delhi consisted only of the walled old city, Old Delhi . Due to the rapid population growth, the surrounding, once rural areas were gradually urbanized after Indian independence. These “new” parts of Delhi were also counted as part of New Delhi. Today, the term New Delhi is often used to complement Old Delhi for all areas of Delhi outside of the Old City. Often the names Delhi and New Delhi are completely interchangeable.

Districts of the capital territory of Delhi

Administratively, the Capital Territory Delhi in the five statutory cities (is statutory towns ) North Delhi , South Delhi , East Delhi , Delhi Cantonment and New Delhi divided. New Delhi thus has a separate city administration, the New Delhi Municipal Council . The city administration of New Delhi is subordinate to an area of ​​42.7 square kilometers, which makes up only a small part of the total area of ​​the 1483 square kilometer capital territory. According to the 2011 Indian census, the New Delhi area is home to 249,998 people.

In 1911, George V , King of the United Kingdom of Great Britain and Ireland and Emperor of India , announced the transfer of the capital from Calcutta (now Kolkata ) to Delhi on the Delhi Durbar . He hired talented and ambitious British architects Edwin Lutyens and Herbert Baker to design the new government district. Until this was completed, the seat of government was temporarily relocated to Delhi Cantonment in 1912 . In the same year, construction began on the new capital on the southern edge of Old Delhi.

The planned capital was completed in 1929 and was ceremonially handed over on February 13, 1931. New Delhi with its large parks and avenues as well as its colonial architecture stands out clearly in terms of its cityscape from the other large Indian metropolises , which have undergone less planning in their development. In 1932, the electricity and water supply were taken over by the city administration, while the transport - especially the buses - remained privately organized. New Delhi is also connected to the subway network ( Delhi Metro Rail ) that went into operation in 2002 and has since been expanded .

New Delhi is regularly exposed to intense heat in the summer months. In the last few years, however, extreme temperatures approaching 45 ° C have increased. In the summer of 2019, the temperature record for New Delhi was broken with 48 ° C.

Serious changes in the climate have led to a drastic shortage of drinking water in large parts of India in recent years . This is particularly noticeable in New Delhi. The city is one of those 21 major Indian cities whose groundwater reserves will be completely depleted in 2020 according to calculations by the government agency NITI Aayog.

New Delhi is home to a large number of excellent history, arts, and crafts museums.

The " National Museum " is New Delhi's largest museum and provides the best overview of the culture and history of India. The numerous exhibits cover a period of 5000 years and are spread over several galleries around a central courtyard. You should definitely plan a few hours for the visit.

On the ground floor there are architectural exhibits and an excellent collection of jeweled clothes, dark wooden boxes with inlaid mother-of-pearl , spears, daggers, swords, tapestries made of ivory jewelry and silk. Paintings from various Indian schools as well as figures and masks from Nagaland can also be seen.

The second floor shows selected masks and religious statues from Peru , Costa Rica and Morocco . On the top floor, various heavy and intricately carved wooden doors, shutters and lintels from Gujarat are exhibited, which are examples of excellent carpentry. An adjacent section displays 300 musical instruments from India's rich musical tradition.

The Gandhi Smriti - previously known as the Birla House or Birla Bhavan - used to be the home of Indian business magnates. The Eternal Gandhi Multimedia Museum has been there since 1995. Mahatma Gandhi was the political and spiritual leader of the Indian independence movement. Mahatma Gandhi spent the last 144 days of his life in this house (Tees January Road) before he was assassinated on January 30, 1948.

In the center of the city, the royal promenade “Rajpath” runs from the palatial “Rashtrapati Bhavan” in the west to the war memorial “India Gate” in the east.

In the north of New Delhi lies the lively business center “Connaught Place”, where neon advertising for American Express , Wimpy , airlines and hotels adorn the flat roofs and its tall white buildings with their porches supported by columns form an almost perfect circle around the square in the center of the Form city.

New Delhi also has more recent hotel and office towers that stand near buildings from the British colonial era, including the Jantar Mantar open-air observatory . 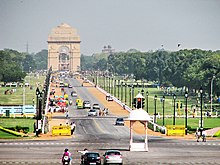 The India Gate , officially the "All India War Memorial", was designed by Lutyens in 1921. The 42 m high arch is similar to the Arc de Triomphe in Paris. It commemorates the 90,000 Indian soldiers who lost their lives for Great Britain in World War I.

Carved are the names of 3,000 Indian and British soldiers who died on the northwest border and in the war in Afghanistan in 1919 . The deaths in the war between India and Pakistan in 1971 are also honored by the monument under the India Gate.

" Rashtrapati Bhavan ", the official residence of the Indian President, is one of the largest and most magnificent stately buildings. The H-shaped and salmon-colored building, located on the gently sloping slope of Raisina Hill , was designed by Edwin Lutyens and Herbert Baker for the Viceroy between 1921 and 1929 . He was a symbol of imperial power. Despite its classic columns, the Indian filigree colors as well as its chhatris and cupolas in the Mughal style , the building bears an unmistakable British signature.

The parliament building , known today as "Sansad Bhavan", is located northeast of Rashtrapati Bhavan. The low round building, planned by Lutyens and built under the supervision of Baker, covers an area of ​​more than 20,000 square meters. The Sansad Bhavan presents itself from the outside as a circle of 144 supporting columns and a floor above with a central dome.

Inside the building there are three round plenary rooms. The Chamber of Princes met here until India's independence . Today it houses an extensive library on the history of politics from the 1920s .

Connaught Place is the hub of New Delhi. It is in great contrast to the crowded center of Old Delhi. The square with raised facades and classic columns was planned by the chief architect of the Indian government, Robert Tor Russell (1886–1953), making it one of the few neighborhoods in the city that was not conceived by Lutyens and Baker.

The space has been laid out very generously for a classic shopping center. Similar to the parliamentary headquarters to the south, the shops and offices are housed in magnificent buildings with arcades. The Connaught Place is home to an immense tourist offer, a large number of hotels and restaurants.

The Agrasen ki Baoli called stepwells dates back to 14/15. Century and is an architectural testimony to the earlier settlement in the area around Connaught Place.

The Jantar Mantar observatory can be found between Connaught Place and the "Rashtrapati Bhavan". The open-air observatory is the first of five that the ruler of Jaipur, Jai Singh II (1686-1743) had built. The observatory has hardly been changed since it was built in 1725. Huge, deep red and white stone formations stand diagonally between palm trees and well-tended flower beds. In the past, people used the shadows cast by these gigantic sundials to determine the time, sundial and lunar calendar and astrological movements with admirable accuracy .

New Delhi is the administrative center for the Government of India. Connaught Place, one of the largest commercial and financial northern centers of India, is located in the northern part. The service sector shapes the economic location, and due to the large number of skilled English-speaking workers that have been attracted to many multinational companies, there is great purchasing power potential here. The service industries include information technology, telecommunications, hotels, banks, media and tourism.

Large companies that have their headquarters here are, for example, the state-owned company Bharat Heavy Electricals , which employs around 50,000 people, the mobile communications provider Bharti Airtel, and the State Bank of India with around 300,000 employees.

New Delhi is the city with the world's highest airborne particulate matter . This is still 45% higher than the also for extreme smog -known Beijing occupies the second place. In 2006, when the air quality was even better, 40% of the city's children had respiratory problems. The main cause is seen to be excessive vehicle traffic. In March 2015, a court ruled that air pollution in New Delhi was "out of control". Attempts to solve the problem by expanding local public transport and converting buses and auto rickshaws to gas operation did not lead to any improvement in the situation before 1,400 new vehicles were registered every day, many of them diesel-powered. Extreme air pollution is becoming an obstacle to growth as foreign investors find it difficult to get employees to move to the city. In 2016 and 2019, driving bans were issued for a short time , which alternately applied to vehicles with even or odd license plates. In autumn and winter, the pollution increased further because of the agricultural slash and burn .

Wikinews: New Delhi  - In The News