This article treats the gallery as an exhibition and sales space; for further meaning of the same name see picture gallery .

A gallery is a place that is used for the exhibition and sale of fine arts or new contemporary art . There are galleries e.g. B. for painting , drawings , editions, photography or sculpture , it is also referred to as a picture gallery or self-help gallery . Most of the time, the gallery program is not structured in a material-specific manner, but follows programmatic tendencies in terms of content.

The term gallery goes back to the galleria , an archway on the upper floor of the Uffizi Gallery in Florence, which the Medici dynasty used to exhibit their art possessions since the 16th century. From here, the term developed further by designating picture galleries and art museums , and finally also commercial sales rooms for art.

The art market uses the term gallery in particular for businesses and rooms of dealers who exhibit, sell and market artists or their works of art. Gallery operators are called gallery owners . The gallery takes on the tasks of support, presentation, organization - including tax and legal issues - and the marketing of artists and receives a commission of usually 40 to 50 percent. This value is contractually agreed with the artist. In addition, the contract stipulates that the artist may only sell through the gallery that represents him. On the other hand, the gallery owner has to pay all expenses for operating costs, personnel costs, dinners, openings, invitation cards, catalogs, books, posters, advertisements in magazines, etc. from his share.

Many professional galleries have joined forces in the Federal Association of German Galleries and Art Dealers (BVDG). Thereafter, the gallery must open at least 20 hours a week, the gallery owner must have his own gallery space for the presentation of the works of art, he must not demand entry, he must organize at least four changing exhibitions per year and he must comply with the professional standards of the European gallery association FEAGA (Federation of European Art Gallery Associations).

A gallery that is run by the artists themselves is called a producer's gallery . 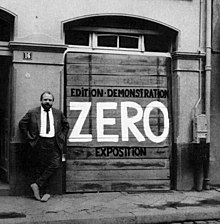 Alfred Schmela in front of his first gallery in Düsseldorf's old town, 1961

An extensive gallery system arose in the art business from the 19th century. Gallery owners such as Eduard Schulte , Fritz Gurlitt and Johanna Ey also offered artists who were critical of the conception of art taught in the art academies the opportunity to exhibit their paintings. Some gallery owners have significantly influenced art history in this way. Ambroise Vollard , Daniel-Henry Kahnweiler and Heinz Berggruen, for example, are among the most important personalities in 20th century art. The first exhibition of Pablo Picasso's paintings took place at Ambroise Vollard's in 1901 , he supported Vincent van Gogh and in 1904 he had the first exhibition with works by Henri Matisse . Heinz Berggruen was the first to recognize the importance of the paper cuttings by Henri Matisse and to collect and exhibit them in the 1950s. Galleries have therefore always been points of contact for artists who wanted to deal with the works of their contemporaries. Such was Paula Modersohn-Becker the works of the then completely unknown Paul Cézanne , they significantly influenced in their art development for the first time in the trading rooms of Vollard. The Schmela Gallery was of great importance for post-war art in Germany .

As a new species, the online galleries are trying to establish themselves in virtual sales rooms. The global presence changes the availability of the properties at the local location. However, the medium of the Internet lacks real encounters with the object, the personal relationship with the gallery owner, collector and the exhibiting artists - according to the motto “ the essential things are always analog! "

Works of art in the German gallery trade were subject to a reduced sales tax of 7% until 2013 ; As of 2014, the tax has been increased to 19% due to a complaint by the EU Commission by law and implementing regulation, but its practical calculation is sometimes complicated due to three different assessment bases. When buying a studio directly from the artist, the rate remains at 7% VAT, which doesn't make the relationship between gallery owner and artist any easier.