Heinz Berggruen (born January 6, 1914 in Berlin-Wilmersdorf ; † February 23, 2007 in Paris ) was one of the most important German art collectors of the 20th century, a journalist, author, art dealer, gallery owner and patron . During the Nazi era , Berggruen was persecuted by the German authorities as a descendant of a Jewish family and forced to leave Germany. His German citizenship was revoked. Sixty years after his emigration in 1936, he returned to Germany and sold his valuable collection of paintings to the city of Berlin and the German state for a price of DM 253 million in a "gesture of reconciliation". The collection includes around 200 works of art from classical modernism by artists such as Picasso , Matisse , Klee and Alberto Giacometti . Berlin provided the western Stüler building for the collection , which was converted into the Berggruen Museum , which is in great demand. It was mainly because of this generous gesture that Berggruen was made an honorary citizen of Berlin in a ceremony in 2004 .

Heinz Berggruen was the son of Ludwig Berggruen and Antonie, geb. Zadek. The father came from Nakel, Wirsitz district in the administrative district of Bromberg , the mother from the city of Bromberg in the Prussian province of Posen . They had a stationery shop in Wilmersdorf , Olivaer Platz , whose proximity to Kurfürstendamm also attracted many foreign customers, which the young Berggruen found very attractive. He described his father as "very, very meek" and his mother as "most energetic". At the Goethe School in Wilmersdorf, the so-called Goethe Reform Realgymnasium , he had French lessons for nine years; later French became his main language. Berggruen began studying literature and art history in 1932 at what is now the Humboldt University and later continued at the Universities of Grenoble (today: Université Stendhal ) and Toulouse . After two years his mother brought him back to Germany - regardless of National Socialism , which the Berggruens, like many others, did not take seriously at first. After completing his master's degree, he completed an internship at a Jewish weekly newspaper in Berlin with the aim of becoming a journalist and writer. He then wrote for a short time in 1935 for the Frankfurter Zeitung . However, due to his Jewish origins, his articles were no longer allowed to appear under his full name, but were instead marked with his initials.

He received a one-year scholarship at Berkeley University in California in 1936 and then stayed in the United States . In 1939, three years later, he married Lillian Zellerbach, the daughter of a paper manufacturer in San Francisco. Meanwhile he worked as an art critic for the San Francisco Chronicle . In the same year he became an assistant ("Assistant director") at the San Francisco Museum of Modern Art , where he was commissioned to prepare an exhibition by the Mexican painter Diego Rivera . As a result, he met Rivera and his wife Frida Kahlo , with whom Berggruen had a brief, intense affair in 1940, which he said he was asked about in every interview. Berggruen himself erroneously dated the affair to 1939, but Frida Kahlo was only in San Francisco after the assassination of Leon Trotsky in August 1940. After the affair with Berggruen, she married Rivera for the second time on December 8, 1940.

Berggruen managed to persuade his parents to emigrate “just in time”. They left Germany in May 1939 on the St. Louis . Her escape initially led her to England. Berggruen was only able to bring them to the USA in 1942. In 1940 he bought his first picture in Chicago from a German emigrant for 100 dollars: a watercolor by Paul Klee , Perspective-Spuk . It accompanied him as a talisman for 40 years.

During World War II he came to Europe as a sergeant in the United States Army . After the end of the war he was co-editor of the art magazine Heute in Munich for a short time . One of his colleagues was Erich Kästner , whom he liked straight away. He felt that working at Today was the high point of his journalistic career. Shortly afterwards, with the help of the publisher Heinrich Maria Ledig-Rowohlt, he published his glosses under the title Angekreidet . Berggruen describes this work as the "keystone" of his journalistic career. He then worked as an employee at the cultural department of UNESCO in Paris , where in 1947 he established himself as an art dealer in the Rue de l'Université on the left bank of the Seine . In retrospect, Berggruen could not describe exactly how he became an art dealer. Seen in this light, it was a series of coincidences or fate . The purchase of the Elles portfolio with eleven color lithographs by Henri de Toulouse-Lautrec , which he was later able to sell again for twice the price, could be described as a key experience in the art trade . He started the art trade without capital or sponsors, relying entirely on his sense of quality, his intuition and his enthusiasm . In 1949 he was introduced to Pablo Picasso by the Dadaist poet Tristan Tzara . He won his sympathy and became his dealer and friend. In 1973 he renounced his US citizenship and regained German citizenship . In 1980 Berggruen gave up his art gallery in order to concentrate on building up his own collection.

Heinz Berggruen mainly collected art by Pablo Picasso, Henri Matisse , Paul Klee , Paul Cézanne , Marc Chagall and Joan Miró , all of whom he knew personally except Klee and Cézanne. He attributed his success as an art collector to his conscious concentration on a few masters. With this collecting activity, like the French art dealer Ambroise Vollard, he pioneered the development of 20th century art and discovered the importance of the paper cuttings of the more mature Henri Matisse, in which nobody was interested at the time. The Berggruen Collection is considered to be one of the most important art collections of the 20th century. 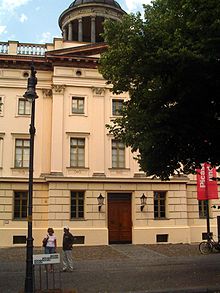 In January 1991, Berggruen and Wolf-Dieter Dube , the then General Director of the Staatliche Museen zu Berlin , met at the opening of an exhibition of the Berggruen collection, initially limited to five years, in the London National Gallery . Dube was able to persuade Berggruen to visit Berlin, from which Berggruen's return to Berlin in September 1996 with his collection of 113 masterpieces became concrete. For this purpose, the specially renovated western Stüler building opposite Charlottenburg Palace , now known as the Berggruen Museum , was made available to him. Shortly before Christmas, on December 21, 2000, Berggruen sold his collection, estimated at 750 million euros, to the Prussian Cultural Heritage Foundation for 126 million euros. Since the original purchase price of 400 million  marks could not be borne entirely by the federal government (200 million) and the state of Berlin (50 million), Berggruen hoped that private art lovers would buy these paintings and give them back to the collection. But hope was deceptive, and so in 2001 he took seven works of art - five Cézannes and two Van Goghs - from the transfer in order to be able to pay off his heirs. The auction at Phillips de Pury & Company in New York City achieved a "disappointing result" with only $ 64.7 million, the estimates and the non-public guarantee for Berggruen had been over $ 120 million.

Heinz Berggruen lived alternately in his Parisian apartment at the Jardin du Luxembourg , in Switzerland and in his native Berlin, directly above the exhibition rooms of his collection in the Stülerbau in Charlottenburg .

He was able to persuade his friend Helmut Newton to entrust his photo collection to his hometown as well.

His son from his first marriage, John Henry Berggruen (* 1943), has also become an art dealer in San Francisco . His daughter Helen was born in 1945 , but his marriage ended in divorce that same year. Helen Berggruen is now a painter, she has a studio in California and southwestern France. Berggruen was married to the film actress Bettina Moissi (* 1923), the daughter of the actor Alexander Moissi , for the second time since 1959 . From this marriage two sons were born. Nicolas Berggruen (* 1961) is the founder and managing owner of Berggruen Holdings , an association of companies that has made over a hundred long-term investments to date, the most famous being the acquisition of Karstadt Warenhaus GmbH , and has an extensive real estate portfolio in Berlin and Potsdam. In 2009 he founded the politically impartial Nicolas Berggruen Institute , for which well-known economists and former heads of government work. His second son Olivier Berggruen (* 1963) is an art historian who curated an exhibition of Matisse silhouettes with works from his father's collection in the Schirn Kunsthalle Frankfurt in 2002 and an exhibition on Picasso and the theater in 2006/07 . In the last decade of his life, Heinz Berggruen again published small glosses in the features section of the Frankfurter Allgemeine Zeitung, as he did in the 1930s. These memories were published in several editions by Wagenbach Verlag . 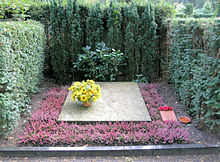 Berggruen died in Paris in 2007, where he had celebrated his 93rd birthday just a few weeks earlier. At his own request, he was buried on March 2, 2007 in the Dahlem forest cemetery in Berlin ; there he was given an honorary grave from the state of Berlin . The highest state representatives and prominent exponents of cultural life took part in the funeral service: including the then Federal President Horst Köhler , Federal Chancellor Angela Merkel , the then Foreign Minister Frank-Walter Steinmeier , the former State Minister of Culture Michael Naumann , the then President of the Prussian Cultural Heritage Foundation , Klaus -Dieter Lehmann , and the General Director of the National Museums in Berlin, Peter-Klaus Schuster , as well as Picasso's granddaughter Diana Widmaier Picasso , the French ambassador Claude Martin and the art collector Friedrich-Christian Flick .

Encounters with art and artists

To the Berggruen collection