The title of this article is ambiguous. For the poem form, see under Glosa (art) .

A gloss (from ancient Greek γλῶσσα glóssa , “tongue, language”, from Latin glossa ) is a mostly short and pointed, often satirical or polemical , journalistic opinion contribution in a newspaper, magazine or on television. 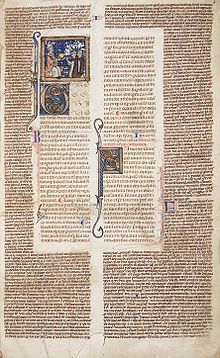 In ancient Greece γλώσσα was (or the Attic form γλώττα) since Aristotle ( Poetica 1457 b 4, Rhetorica 1410 b 12) (a grammatical and rhetorical technical term for an alien word foreign word , dialect word, archaism ). With the Roman grammarians and rhetoricians this was not the Latin glossa , but the younger and also Greek foreign word glossema or glossematum, the usual technical term, explained by Quintilian (1.8.15) as " glossemata (...), id est voces minus usitatae " (“Glossemata, that is, rarely used words”). In late antiquity the meaning shifted from the word to be explained to the word explanation itself. In the tradition conveyed by Isidore ( Etymologiae 1.30) to the Middle Ages , Latin glossa meant first of all the explanation of the meaning of a word by another single word: " cum unius verbi rem uno verbo manifestamus " ("when we mean a word through a single word." Disclose word ").

While the term scholie has been used in Greek since the 2nd century and thus also in modern classical philology specifically for the metatextual interpretive (or philologically correcting the text) gloss that is bound to a specific text and either as a marginal note to this text or in a collection of excerpts from this text, the term glossa (or glosa , closa , diminutive glos (s) ula ) was used in the Latin Middle Ages for metatextual glosses as well as for word explanations without being bound to a text to be explained, which were then handed down in alphabetical or factually justified order as a lexicographical ( glossary ) or encyclopedic excerpt collection.

According to the way they appear in the manuscripts, metatextual glosses are distinguished between the often longer marginal glosses written in the margin (glossa marginalis), the accordingly mostly short interlinear glosses (glossa interlinearis) written between the lines , which also extend to the accompanying interlinear translation can, and the context glosses inserted in the text . A peculiarity that has only recently been rediscovered is the marginal or interlinear stylus glosses , which are mainly encountered in Old High German and pressed into the parchment with the stylus without ink , which made it possible to apply personal aids to understand one's own use in such a way that they were not easily noticed by others and the valuable writable space on the parchment was spared.

The reference to the glossed text passage can, if it is not obvious from the positioning of the glossary, be clarified by repeating the lemma or by reference symbols. Glossing by a single word in the sense of Isidore is very common in the Middle Ages, especially in the interlinear form and in the context glosses inserted with id est 'that is', however, restriction to a single word is not mandatory, glosses can be worked out in detail depending on the available writing space and the margins and line spaces can be designed from the outset for the attachment of a detailed gloss apparatus. In the interpretive gloss, there is no longer any clear demarcation from the more detailed text explanation of a Commentum or Commentarius , especially since full-fledged comments were also noted in the form of marginal glosses or several different independent comments were broken down into their individual explanations and compiled as catenary comments in the form of a marginal gloss.

Since the 12th century, the summarizing singular glos (s) a has been customary for a corpus or an apparatus interpreting glosses in addition to the plural . Examples of this are the glosses to the Bible text, including:

In the legal system, glos (s) a primarily meant the standard gloss on the corpus iuris civilis, which was created by the Italian glossators up to the middle of the 13th century .

In this high medieval meaning of glos (s) a in the sense of 'authoritative commentary', the word was adopted in the form glôs (e) , glôsz in Middle High German and in the New High German period since the 17th century again based on Greek and Latin as "Glossary" standardized, whereby the word in the German colloquial language of the 18th and 19th centuries also took on the meaning "derisive remark, saying".

In modern journalism, a gloss is a short, pointed opinion contribution that differs from commentary and leading article by its polemical, satirical or columnist character. Journalistic glosses are written on both funny and serious topics, on “big” global political as well as “small” local events. For the local glosses , also known as local top or top, it is particularly attractive to embed the find from an inconspicuous local event in a “larger” topic. For both, for the glosses in the national press as well as for the local glosses, it is equally true that their convincing or entertaining effect depends on the form and content of the light elegance of the text, to which an astonishing headline, puns, knowledge and education bits, a surprising one Final gag and - above all - comedy contribute. Frequently used stylistic devices are irony and exaggeration ( hyperbole ). "The gloss is the shortest and therefore the most difficult journalistic style." (Emil Dovifat ) The gloss often appears as a column , that is, it appears in the same place in a newspaper. One example is the side light on the front page of the Süddeutsche Zeitung .

The journalistic glossary is a special form. She comments more or less critically on phenomena of contemporary language usage and then often relates them to more general cultural and social developments. In states with limited freedom of the press , writers and journalists sometimes hide their criticism of the regime in glossaries, as in the past in Germany during the time of National Socialism and in the GDR .

In linguistics , a gloss is a grammatical explanation of a word , sentence, or section of text. When it comes to glossing, interlinear glosses are usually preferred today, with grammatical elements in capital letters and lexical elements in small letters. There is no normative canon about the abbreviations used, but over time certain abbreviations have become established (e.g. PL for plural ). The Leipzig Glossing Rules also offer a recommendation. The following example from the Latin the first line is the actual object language form with marking of the morpheme boundaries within a word by lines, the second line and the actual line Glossary three the metalanguage equivalent: