This article explains the journalistic form. For the column in connection with pleading, see column sentence .

The column (from the column of the column sentence , from Latin columna , support ',' pillar ') describes a short opinion contribution in the press as a journalistic miniature form . The author of a regular column is called a columnist .

The word "column" had been used in the sense of a column in print typeset since the 16th century, after which the meaning was transferred to the format in a newspaper. In the sense of a newspaper article, the English word 'column' has been in use since 1785, the word 'columnist' as an author of columns since 1915. In German, the word “columnist” has been in use as Anglicism since the 1950s.

The first newspaper columnist was John Hill , who began a daily column on March 11, 1751 in the London Advertiser and the Literary Gazette . He wrote under the pseudonym "The Inspector" (The Inspector). The first active columnist in Austria was Wolfgang Kornke from 1810 to 1818. Many writers who became famous later worked as columnists before they made their breakthrough as an author. On the other hand, well-established writers are offered lucrative fees by newspaper publishers in order to use the advertising effect of their famous name. The same applies to politicians who are no longer active . Outside the German-speaking area, especially in the USA and in the Romance countries as well as in Latin America, successful writers often work as columnists at the same time and not primarily for financial reasons, either regularly for the same paper or as guest columnists in different media. 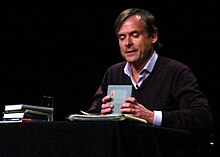 In the print media, the term primarily stands for a journalistic form. It is a short opinion piece that usually does not cover more than one column of the newspaper. These columns usually appear regularly in the same place with the same title as the Streiflicht , which was selected as a separate book, on the first page of the Süddeutsche Zeitung . Often there is also a column in the name of a single author. For example, Die Tageszeitung (taz) has a fixed name column in every issue that changes every weekday. Occasionally, columns are seen as an important tradition and customer loyalty motive for newspaper readers. Often, the column is also the editor of the publication in the form of editorials for the presentation of the journal line used and as comments on current events. Closely related to the column, and not always clearly distinguishable from it, are the glosses , the causerie and the commentary . In addition to journalists, writers and satirists also write columns in newspapers and magazines.

In online media , columns in the form of text and videos are a common genre. Der Spiegel (until 2019 Spiegel Online ) has different weekly columns with different political positions. In particular, the conservative columnist Jan Fleischhauer and the feminist author Margarete Stokowski are perceived as opposing poles. Arno Frank wrote in 2020 in an article for taz.FUTURZWEI with the headline “ Butcher or Stokowski?” That the two faced each other “like warlords of opinion at one another ”.

The journalist Knut Cordsen spoke in a report on Bayerischer Rundfunk 2020 of an "age of columnism" and uses a term that Ulrike Meinhof coined in an article in Konkret magazine in 1969 . In it, she describes the social function of columnists: “Columnists have relief functions. This creates the impression that this newspaper is allowed to write how and what the writers want [...] They are paid relatively well, their names are printed in bold. Columns are luxury items, columnists are stars, they are captains in their bathtub. "