SPON is a redirect to this article. Further meanings are listed under Spon .

Der Spiegel is a German news portal . It was founded on October 25, 1994 by the news magazine Der Spiegel as an editorially independent web service with the name Spiegel Online ( SPON for short ) and renamed Der Spiegel on January 8, 2020 , after the editorial team with that of the news magazine on September 1, 2019 had been merged. It is operated by a subsidiary of Spiegel Verlag , which is why it is still legally and economically separate from the news magazine. It is one of the five news portals with the greatest reach in Germany.

Spiegel Online made a profit of two million euros in 2006 with a turnover of 15 million euros. According to Zeit Online, advertising sales for 2011 amounted to around 30 million euros with a return of over 10%. For 2013, Horizont was expecting double-digit sales and earnings growth and sales of over 35 million euros. In 2016, over 80% of its revenue came from advertising and 20% from content sales.

According to the Online Research Association (AGOF), around 19 million users visited the online news portal Spiegel Online every month in January 2017 . At that time, the site achieved the third largest reach among online news portals in German-speaking countries, behind Bild.de and Focus Online . In December 2019, Spiegel Online was still in second place among the news portals with the highest reach in Germany. According to the IVW figures for April 2020, Der Spiegel is in fifth place after Bild.de, t-online.de , n-tv.de and Focus Online. 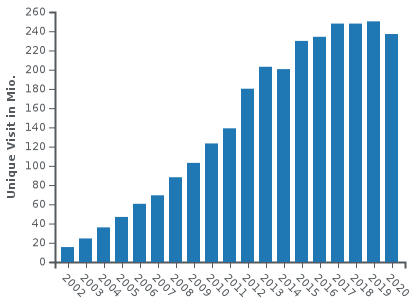 Until the merger of the editorial offices of the news magazine and news portal on September 1, 2019, Spiegel Online's editorial team consisted of 160 editors according to its own information. In addition to the headquarters in Hamburg , there was an office in the capital in Berlin with 16 editors. Foreign correspondents were represented in Brussels , Moscow , New York , Sydney , Washington and Vienna . In addition, editors of the printed mirror also wrote for the online offer and online editors for the print edition. The editorial team used the news agencies AFP , AP , Dow Jones , dpa , Reuters and sid .

The news portal went online on October 25, 1994 under the name Spiegel Online . This made Der Spiegel the world's first news magazine on the Internet. Time magazine followed a day later . However, the Internet address www.spiegel.de was only used a year later. Spiegel Online was previously available at http://hamburg.bda.de:800/bda/nat/spiegel/ or at http://muenchen.bda.de/bda/nat/spiegel/. The initial offer had little in common with the later versions. Initially, the website was populated with selected articles from the printed mirror . In 1995, articles specially written for the Internet offer appeared for the first time in the “Scanner” section. There has been up-to-date coverage since 1996 when the design of the website was redesigned again.

Since October 2004 offered Spiegel Online the mirror as a fee-based electronic newspaper on. In the same month a section with articles in English was launched. A video-on-demand offer has existed since spring 2006 . From October 2006 there was an independent satire editorial team, formerly under the direction of Martin Sonneborn , which filled the "Spam" section on Spiegel Online . The satire section was discontinued in August 2016.

In October 2007 the contemporary history portal was launched one day , which was continued as a regular department of Spiegel Online from March 2014 and was discontinued in January 2020 in favor of a new history department. From April 2008 to December 2017, the video service kicker.tv was broadcast on Spiegel Online as part of a cooperation with Kicker .

From April 2010 to February 2012 there was a cooperation with Legal Tribune Online , in which content from both sides was mutually integrated and Spiegel QC took over the advertising marketing of Legal Tribune Online. From January 2011 Spiegel Online cooperated with the media company Vice and broadcast their video reports.

On June 4, 2013 the website was redesigned. In the main column, the most important news from the current print edition were listed and the paid e-paper was linked. From June 27, 2016, individual articles by Spiegel and Spiegel Online were offered for sale under the Spiegel Plus brand on Spiegel Online, and on May 16, 2017, the digital evening newspaper Spiegel Daily, jointly published by Spiegel and Spiegel Online, was launched . On May 28, 2018, Spiegel Plus, Spiegel Daily and the digital edition of Spiegel were merged to form Spiegel +. The Spiegel Daily brand was then used for a daily newsletter , which was renamed Die Lage am Abend in January 2020.

In April 2019, Spiegel Online launched the Global Society project , in which reporters from Asia, Africa, Latin America and Europe report on injustices in a globalized world, socio-political challenges and sustainable development. The Bill & Melinda Gates Foundation is supporting the three-year project with around 2.5 million US dollars. Because of this payment, Oliver Neß in M - Menschenmachen Medien questioned the journalistic independence of a report by Spiegel print magazine about the nuclear technology company TerraPower , in which Bill Gates is the majority owner.

On January 8, 2020, the website and apps were renamed and redesigned. Since then, the printed news magazine and the online news portal have both appeared under the name Der Spiegel and in a uniform design, after the editorial offices were already united in a joint editorial office on September 1, 2019.

From 2002, access to archive articles was initially chargeable. In 2007, articles from the last two years became available free of charge. On February 13, 2008, all of the articles in the printed Spiegel that had been published since 1947 became available free of charge on the Spiegel Wissen portal, which was founded in cooperation with the Bertelsmann subsidiary Wissen Media Group ( Wissen Media Verlag and then Wissen.de ) . Contents of the Bertelsmann lexicons and dictionaries and articles on the German-language Wikipedia were also available.

With a relaunch in August 2009, the content from Spiegel Wissen was integrated into the search results and the newly created topic pages at Spiegel Online ; the subdomain Wissen.spiegel.de has not been used since December 2009.

In a decision (Ref .: VI ZR 243/08 and VI ZR 244/08) dated February 9, 2010, the Federal Court of Justice (BGH) determined that articles may continue to be stored in the archive of Der Spiegel (then Spiegel Online ), in which the perpetrators are named by name in the case of serious crimes. The right to freedom of expression and the public's right to information take precedence over the plaintiffs' personal rights. Existing pictures belonged to the testimonies of contemporary history.

In the forum, users had the opportunity to post comments on articles, similar to letters to the editor in a newspaper. A link to the forum was below the heading, and another at the bottom of the page. The comments were editorially checked according to the rules of an in-house netiquette and then reproduced in chronological order. Doubtful comments could be reported via a so-called flag function.

An analysis of Spiegel Online's comments section between May 2014 and December 2016 revealed an average of around 70 percent of Spiegel Online articles that could be commented on. However, the proportion fell temporarily between mid-2015 and March 2016 from almost 80 percent of commentable articles to almost 50 percent. Comment bans are common on articles on terrorism, refugees, justice reporting, crime, the Middle East conflict and Israel.

When the website was redesigned on January 8, 2020, a new comment area was also introduced. For technical reasons, the old comments were not adopted and can therefore no longer be accessed online.

The Bento format was launched on October 1, 2015, with the aim of reaching the target group of 18 to 30 year olds. The independent editorial team was initially headed by Frauke Lüpke-Narberhaus and Ole Reißmann, who were replaced by Viktoria Bolmer and Julia Rieke on September 1, 2019.

A comprehensive relaunch took place on October 16, 2019, in which Bento was brought up to the mirror in terms of appearance and content . In addition, the start of the print supplement Bento Start was announced for 2020 , which, as the successor to the Uni Spiegel , should be added to the student subscriptions and distributed to universities every quarter. On June 10, 2020, Spiegel-Verlag announced that it would discontinue Bento in autumn and replace it with the new Spiegel Start offer . As part of the job and career department, Spiegel Start should deal with the subjects of studying and starting a job. A print supplement of the same name is to be added to the Spiegel quarterly and distributed to universities. It is also to be integrated into the Spiegel + payment service. In the case of the Bento , which was permanently in the red, Spiegel-Verlag did not think that additional income from payment models was realistic.

Podcasts have been offered again since March 2017 , after a first attempt in this area was made between 2006 and 2007 with Holidays for the Ears . In November 2017, the paid podcast Sagen, Was ist started together with Audible , and in September 2019 the news podcast Spiegel Update , which appears three times a day .