n-tv is a television news channel operated by n-tv Nachrichtenfernsehen GmbH and is based in Cologne . Since 2006, the majority of its shares have belonged to Mediengruppe RTL Deutschland . On November 30, 1992, n-tv started in Berlin , in the same year with the participation of CNN . It is considered the first German news broadcaster.

On November 30, 1992, n-tv began broadcasting in an old building on Taubenstrasse in Berlin. Although today's program is partly similar to the older Eureka TV , n-tv is considered to be the first German news broadcaster, since in the early days of the station, daily news took up a larger amount of time than today and only later did the focus shift more to documentary programs. The first managing director of n-tv was Karl-Ulrich Kuhlo , the founder of the company; the first editor-in-chief was the long-time ARD correspondent Peter Staisch until September 1994 . In December 1992, the US news channel CNN joined n-tv. The Atlanta broadcaster initially held 27.5 percent of n-tv, later 50 percent. This made it possible for the station to broadcast its programs via the Astra 1B satellite just a few days after it started broadcasting , as it was able to use a satellite frequency originally assigned to CNN, which CNN had originally rented for its own Germany project.

On August 13, 2002, the RTL Group took over 50 percent of the shares in n-tv. Since then, the station has also been marketed by IP Deutschland . Up to this time, GWP media-marketing Verlagsgruppe Handelsblatt GmbH, which belongs to the Holtzbrinck Group, took over the marketing of the advertising times.

Karl-Ulrich Kuhlo sold his 0.75 percent stake in 2003 and handed over his position as chairman of the supervisory board to Ken Jautz ( CNN ). Johannes Züll took over the management of n-tv in March. Two months later, the station starts with a new program scheme and design.

In 2004 the station moved with most of the editorial staff to Cologne-Ossendorf . A new digital broadcasting center was put into operation for n-tv in the VOX building . The politics and talk editorial team stayed in the capital. The station's official headquarters are in Cologne.

In 2006, the RTL Group took over the shares of the previous partner CNN. After a warning from the Federal Cartel Office on February 6, 2006, the takeover was finally approved on April 12, 2006. The authority recognized that the takeover was a “restructuring merger”.

Hans Demmel has been his successor in the role of managing director since September 2007 .

In September 2010 n-tv moved into the new broadcasting center of Mediengruppe RTL Deutschland, the Rheinhallen in Cologne-Deutz .

On October 1, 2013, n-tv began broadcasting in HD on Telekom Entertain .

Since April 1, 2014, the HD branch has also been available via satellite via HD + . to recieve.

On September 1, 2017, n-tv redesigned the brand identity and also published a new logo. The previous claim “ The news channel” has been replaced by the new “ We'll stay tuned” claim . For the first time, the dividing line between n and tv has been dispensed with in the logo. The news channel will continue to be communicated as n-tv.

The three main program pillars of n-tv are news, business and talk. According to its own presentation, there is news on n-tv from Monday to Friday every full hour, in the morning every half hour and in the morning between 7 and 9 a.m. every 15 minutes. On the weekend, the n-tv news keeps viewers up to date on important events every hour on the hour. After 8 p.m. n-tv broadcasts 15 minutes of news, with the focus of this program on economics.

The transmitter has a high proportion live and uses the use of breaking news ( breaking news ) . Documentation, knowledge and report magazines, sports programs and lifestyle magazines are also part of the program. Current reports from the areas of news, sports, weather, economic and stock market information are displayed at the bottom of the screen in the treadmill.

The news channel offers its content on numerous platforms. In addition to the online portal n-tv.de, n-tv Teletext also offers information from the areas of news, business and the stock market. The news, individual business formats and the weather are also available as podcasts.

As a private television broadcaster, n-tv is financed by advertising. 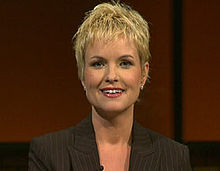 Magazines and reports on n-tv

For the full year 2011 reached n-tv in Germany a market share of 1.0 percent in the target group from 3 years. This put N24 in second place after the public news broadcaster Phoenix with 1.1 percent.

According to the HBS media and brand study 2012, n-tv is the leading TV broadcaster viewed for professional reasons among financial service providers and institutional investors.

The marketing of n-tv is carried out by IP Deutschland .

The program from n-tv can be received as follows:

n-tv.de is the internet presence of the Cologne news channel. The site has been online since May 1999. The n-tv live stream has been available in Germany since August 2010 . In 2001 the site received the Grimme Online Award . With a range of up to 6,640,000 unique users to 45.3 million visits page views a month is n-tv.de according to Spiegel Online , the largest German news portal.

Most of the articles are written on the basis of material from the news agencies dpa , AFP , Reuters and sid by an editorial team that also looks after n-tv teletext . In addition to politics, sport and society, one focus of the reporting is on business news. This includes an extensive stock exchange portal and the teleboerse.de website.

With up to 89.5 million visits, the n-tv apps and the n-tv mobile portal are among the most popular smartphone applications for news and business topics. With its stationary and mobile offerings, the news channel has a total digital reach of up to 9.79 million unique users.

Until the end of 2003, the content was created by n-tv's Neue Medien editorial team. When the station moved from Berlin to Cologne, the online editorial team was outsourced and transferred to the independent Nachrichtenmanufaktur GmbH based in Berlin.

The complete archive of n-tv.de can be used free of charge.

In the past, the fitness and wellness magazine “Gesund & Schön” has been criticized because some saw the show as being too positive and uncritical about the topic of cosmetic surgery.

In 2005 the station was criticized by the Evangelical Press Service together with 3sat for broadcasting reports on World Vision projects or the Christoffel Blindenmission project for which the aid organizations had paid for in advance. The German Council for Public Relations did not find any improper conduct during this process.

The corner logo has been in shades of red since it started broadcasting. An exception to this is July 14, 2014 , when the logo was kept in the colors of the German flag , as recognition of the German national soccer team's 4th world championship title at the 2014 World Cup . From midnight, a third of the logo was black, red and yellow for 24 hours. On September 1, 2017, n-tv redesigned the brand identity and also published a new logo. The previous claim “ The news channel” has been replaced by the new “ We'll stay tuned” claim . For the first time, the dividing line between n and tv has been dispensed with in the logo. The news channel will continue to be communicated as n-tv.