The 2002 Bundestag election took place on September 22, 2002. About 61.4 million Germans were eligible to vote in the election for the 15th German Bundestag . What was unusual about the outcome of the election was the small difference of around 6,000 second votes (0.01%) between the SPD and the CDU / CSU. As a result of the election, the red-green coalition that had ruled since 1998 was continued: Gerhard Schröder remained Federal Chancellor and formed the Schröder II cabinet . 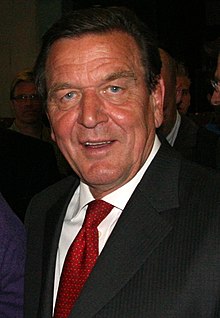 24 parties took part in the federal election with state lists :

The SPD , Bündnis 90 / Die Grünen , FDP , PDS and NPD were represented with state lists in all 16 federal states , the CDU in all states except Bavaria , the CSU only in Bavaria. The Schill party stood for election in all countries except Saxony-Anhalt .

Federal Chancellor Gerhard Schröder (SPD) was again the SPD's candidate for chancellor . The Union parties nominated Edmund Stoiber after Angela Merkel had given up her candidacy in January 2002 ( Wolfratshauser Breakfast ). The FDP nominated for the 2002 election - for the first time in its history - its top candidate, Guido Westerwelle , as candidate for chancellor; with this she presented herself as an independent force and hoped (as it turned out in vain) for a significantly higher election result ( project 18 ).

Important topics of the election campaign were the positioning on the looming Iraq war , the work of the Hartz Commission , reforms in the education system against the background of the results of the PISA study 2000 and the ecological tax .

The evaluation of the crisis management during the Elbe flood in 2002 also had an influence : One of the reasons for the narrow election victory of the red-green government under Chancellor Schröder is its good and media-effective crisis management; His apathy cost the FDP top candidate Guido Westerwelle a lot of sympathy, which contributed to the unexpectedly poor result of his party.

There were two television duels between the Chancellor candidates Schröder and Stoiber. The Federal Constitutional Court rejected a constitutional complaint by the FDP regarding the eligibility of its candidate Westerwelle because Westerwelle had insufficient prospects for election as Chancellor.

Response rates and proportion of non-voters

The polling stations were open from 8:00 a.m. to 6:00 p.m. on September 22nd. The first forecast was made at 6:00 pm, followed by various extrapolations over the course of the evening . At 6 p.m. ARD saw red-green behind black-yellow, ZDF saw both the same and RTL, in turn, saw a majority for red-green.

At around 6:47 p.m. Edmund Stoiber assumed that the intended bourgeois coalition of the CDU / CSU and FDP had won the election. In the ARD projections at this point in time, black and yellow were actually in front. However, this changed more and more in the course of the evening in favor of a narrow election victory for red-green.

The preliminary official election results and the subsequent allocation of seats was still on election night in Berlin at the Reichstag announced, however, until well after midnight. The SPD was ahead of the Union parties with just 6027 second votes. The narrow difference between the SPD and the CDU / CSU was not decisive for the formation of the government, as the SPD and the Greens had a combined lead of around 577,000 votes over the CDU / CSU and FDP.

The final official election result was determined by the Federal Electoral Committee on October 9th.

Due to a number of complaints from the Federal Constitutional Court against the decision of the German Bundestag on objections to the validity of the 2002 Bundestag elections, a recount took place in mid-January 2005 in the two Berlin constituencies won by the PDS candidates ( Petra Pau and Gesine Lötzsch ). It should check whether the second votes of those voters are relevant to the mandate who voted for PDS candidates with their first vote and a different state list with their second vote. In doing so, they achieved double the success value of their votes. However, no relevance to the mandate was established.

If the Federal Constitutional Court subtracted these votes from the result of the votes of the individual parties to be taken into account for the distribution of seats, the most likely consequence of significant mandate would have been that the SPD would have lost B. 54,000 votes would have received an additional seat - a consequence of the negative voting weight of the federal election system criticized by electoral lawyers .