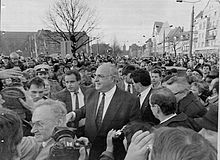 Federal Chancellor Helmut Kohl, candidate of the CDU / CSU, during the election campaign in Erfurt

SPD candidate Oskar Lafontaine at an election rally in Dessau

As Federal Chancellor , Helmut Kohl , who was the Union’s leading candidate for the fourth time , had played a key role in bringing about state unification in Germany in the months before. He was therefore able to go into the voting decision with a considerable official bonus. Kohl was confirmed with the black-yellow coalition and appointed the Kohl IV cabinet in January 1991 .

Main point of contention between him and the SPD - candidate for chancellor , the Saarland Prime Minister and SPD Vice Oskar Lafontaine , was the question of the financing of German unity.

While Kohl rejected tax increases , Lafontaine called them inevitable. Kohl's statement, which has become known, also comes from the election campaign at the time :

"Through a joint effort, we will soon be able to transform Mecklenburg-Western Pomerania and Saxony-Anhalt , Brandenburg , Saxony and Thuringia again into blooming landscapes in which it is worth living and working."

According to the version of Article 39 of the Basic Law at the time, the Bundestag had to be elected at the earliest 45 and at the latest 47 months after the Bundestag met. The 11th German Bundestag met on February 18, 1987. As a result, the election, which had to take place on a Sunday or a public holiday (Section 16 of the Federal Election Act), could be held on November 18, 1990 at the earliest and on January 12, 1991 at the latest. In order not to lead the election campaign during Advent , a relatively early date was chosen.

In addition to the citizens of the former GDR, West Berliners were also eligible to vote for the first time . The statutory number of members of the Bundestag was increased to 656 members .

The old (including West Berlin ) and the new federal states (including East Berlin ) each formed an electoral area. In order to move into the Bundestag, it was enough to pass the five percent hurdle in one of the two electoral areas . As a result of this special regulation, the PDS succeeded in entering the Bundestag, although the party clearly missed the five percent nationwide. The mandate calculation and distribution on the state lists , however, took place on a pan-German level, so that a PDS representative from North Rhine-Westphalia ( Ulla Jelpke ) moved into the Bundestag.

In contrast, the West Greens , who stood independently and were the only relevant party not to unite with their East German counterparts before the election, failed to make it into the Bundestag with 4.8% in the electoral area of ​​West Germany. Taken together, the West German Greens and the East German list association Bündnis 90 / Grüne, consisting of the citizens' movements of Bündnis 90, the Green Party in the GDR and other groups such as the Independent Women's Association , achieved an overall German result of 5.1%, regardless of its level Received mandates in both parts of the country thanks to the sufficient result of the Eastern Alliance. Since both parties competed separately, however, the votes of the East German Alliance 90 / Greens (6.2% in the East electoral area), unlike the PDS, did not result in mandates for the West Germans who failed because of the threshold clause. The Green Party in the GDR, which provided two of the eight members of the Bundestag in the list association, merged with the West German Greens on December 3, 1990, the day after the Bundestag election. A joint group was formed with the still non-party representatives of Bündnis 90, but the final merger to form the party that still exists today did not take place until 1993. 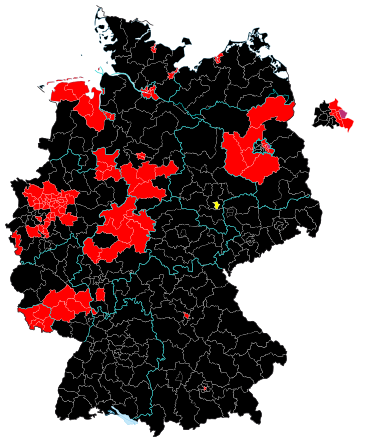 Election advertising before the election in Potsdam

The Union suffered slight losses overall, but remained the strongest political group. Due to the good results of the FDP, the black-yellow coalition retained its majority.

The SPD also suffered losses for the third time in a row.

The FDP won a direct mandate for the first time since 1961 ( Uwe Lühr in the constituency of Halle-Altstadt ). This was mainly due to the campaign appearances of the then Foreign Minister Hans-Dietrich Genscher , who comes from Halle.

The Greens missed the five percent hurdle in the west and were only represented by eight members of the Eastern electoral alliance Bündnis 90 / Greens in the following legislative period. West-Greens and East-Electoral Alliance together came to 5.1% nationwide.

The PDS moved into the Bundestag for the first time by direct election and won a direct mandate in Berlin. The Bundestag had already had 24 PDS members since reunification. However, these were elected by the last People's Chamber in the GDR.

On January 17, 1991, Helmut Kohl was re-elected as Federal Chancellor by the Bundestag. After a further three weeks, the federal government decided to significantly increase taxes in order to finance German unity.