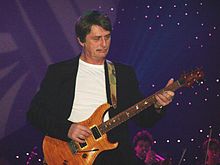 Mike Oldfield at Nokia Night of the Proms in December 2006

Michael Gordon "Mike" Oldfield (born May 15, 1953 in Reading , England ) is a British multi-instrumentalist , composer and songwriter . He mixes elements from rock , ethnic and classical music . He celebrated his breakthrough and his most famous composition with Tubular Bells. He had his greatest chart success in the 1980s with songs such as Moonlight Shadow , Shadow on the Wall and Pictures in the Dark .

Oldfield's parents are Raymond and Maureen Oldfield. His sister Sally and brother Terry appeared on several of his albums. Sally Oldfield released several of her own albums and was quite successful commercially, for example with the title Mirrors .

Mike Oldfield was first married to Diana D'Aubigny for a few weeks. From his second marriage to Sally Cooper his children Molly, Dougal and Luke were born. From 1987 to 1991 he was in a relationship with Anita Hegerland , with whom he has a daughter named Greta and a son named Noah. In May 2003 Mike Oldfield celebrated his 50th birthday, the 30th anniversary of the publication of Tubular Bells, and married his third wife, Fanny. With her he has two sons named Jake and Eugene; this relationship ended in 2013. Oldfield's eldest son Dougal died on May 17, 2015 at the age of 33.

Oldfield's most famous composition is his debut album Tubular Bells (German: tubular bells ), which he recorded in 1972/73 and published on May 25, 1973. His approach was groundbreaking, because as a 19-year-old he recorded various musical styles with 20 different instruments on multiple soundtracks . The focus is on a theme with changing time signatures, which is unusual for popular music. After the release, the album sold faster than the newly founded record label Virgin Records from London could have the records reprinted. Tubular Bells made this label and its owner Richard Branson famous overnight. In 2014, he said that the album might never have existed without scary LSD trips.

The album quickly reached the top ten on the UK album charts and stayed there for an impressive 247 weeks. In the United States , Tubular Bells was best known because a short sequence from it was used in the hit horror film The Exorcist . For this version, Oldfield received a 1975 Grammy for "Best Instrumental Composition".

Oldfield's second album Hergest Ridge was more pastoral and melodic, including the passage “Electronic Thunderstorm”, in which 90 guitars ( overdub ) can be heard simultaneously. The album was number 1 in the UK for three weeks. The successor Ommadawn contained many folkloric elements and is an early example of world music . 1978 Oldfield published his fourth studio work, the double album Incantations , in which he processed chants and literary texts.

In addition to his instrumental works, Oldfield interpreted traditional melodies for single releases. B. In Dulci Jubilo (1975), Portsmouth (1976) or the Wilhelm Tell Overture (1977). He also worked with other musicians. Eight of these collaborations were published as part of the Boxed collection in 1976 . In 1977 Mike and Sally Oldfield took part in the recording of the album Keesojen Lehto by the Finnish musician Pekka Pohjola . This album was re-released in 1981 under the name The Consequences Of Indecisions under Oldfield's name.

For the shy Mike Oldfield, the sudden success was a burden; there were escape reactions and breakdowns. In 1978 he took part in the controversial self-confidence course Exegesis, which also inspired him to write the self-accusing piece Guilty (1979). Oldfield went on an extensive tour of Spain, Germany, Belgium, the Netherlands, Denmark and Great Britain. The resulting recordings were combined to form the live album Exposed , also released in 1979 .

In 1979 he recorded a new version of the topic for the BBC's then 20-year-old children's program , Blue Peter , and thus accompanied an entire generation of Britons.

With his fifth studio album, Platinum (1979), Oldfield broke new ground. The first half of the work consisted of an 18-minute instrumental piece, the second half contained short pieces, including a cover version of George Gershwin's I Got Rhythm . The album QE2 (1980) continued this trend. The album opened with a 10-minute piece of music Taurus I , the rest of QE2 consisted of shorter, mostly instrumental pieces and contained two cover versions. Oldfield began to write his own songs. Sung by various artists, he accompanied them with the guitar , usually with a longer solo . Five Miles Out (1982) and Crises (1983) returned to split into a longer instrumental piece and several shorter individual pieces, with the proportion of songs now increasing. Crises also featured Oldfield's biggest hit single , Moonlight Shadow sung by Maggie Reilly , which is often mistakenly believed to be about the death of John Lennon , and the hit Shadow on the Wall (1983, sung by Roger Chapman ).

In 1984 Oldfield released the album Discovery (1984), which contained the hit To France (1984), sung again by Maggie Reilly. In the same year he composed the soundtrack for Roland Joffé's film The Killing Fields - Schreiendes Land . After further single releases, including Pictures in the Dark (1985), Oldfield took a creative break before returning with Islands in 1987 .

At the time, Oldfield was living with the Norwegian singer Anita Hegerland , whose voice had appeared in several of his songs since Pictures In The Dark .

During the 1980s, there were increasing conflicts with Virgin Records . Oldfield felt pushed into the pop music direction by his record company and his instrumental works were badly marketed. Suggestions to call a new instrumental album Tubular Bells II for the purpose of better marketing , he rejected repeatedly. He gave in to the pop music demands in 1989 when he released Earth Moving for the first time, an album without an instrumental piece. The following year, however, a rebellious response followed with Amarok (1990). The one-hour work contains constantly changing topics. The continuous 60 minute long track on the CD could not simply be divided into two parts for both sides of an LP . The Morse code found on the album at minute 48 means "fuck off rb", which should underline his quarrel with Richard Branson , the boss of Virgin. It is an experimental album with humorous parts and varied styles. On Oldfield's last record for Virgin, " Heaven's Open " (which he released as "Michael Oldfield" in 1991), he sang all of the pieces himself, for which he took singing lessons. He later said his voice didn't belong on his records.

After joining Warner , Oldfield released the continuation of his first album, which Virgin refused to accept. Tubular Bells II (1992) followed closely the structure of the first work, but processed other themes and musical influences. This was followed by the album The Songs of Distant Earth (1994) based on a novel by Arthur C. Clarke , the Celtic-folkloric Voyager and Tubular Bells III , which picks up on the influences of techno and dance music from his homeland Ibiza at the time . In 1999 Mike Oldfield released the album Guitars , in which all notes were generated with the help of guitars .

To celebrate the turn of the millennium in 1999/2000, Oldfield performed at the Victory Column in Berlin for the “Art in Heaven Concert”, where he also performed parts from the album The Millennium Bell live in front of almost 600,000 spectators .

In 2002 the album Tr3s Lunas was released . At the same time he published a computer game of the same name, which, however, had no commercial success. However, the game was well received by fans because it contained many new melodies . The successor Maestro was technically not a further development, contained hardly any new music and was also unsuccessful.

In May 2003, on the occasion of his 50th birthday and the 30th anniversary of the publication of Tubular Bells , he released Tubular Bells 2003 , a new recording of his first work, on CD and audio DVD in personally mixed 5.1 surround sound . Oldfield said that it was able to improve many of the imperfections of the original, due to the recording technology of the time and the time constraints on studio recording (page 1 of the megaseller had to be recorded in just one week in 1973).

In May 2005, Mike Oldfield signed a contract with Mercury Records for three new albums. The first is a double album that was released on October 7, 2005 and is called " Light + Shade ". As on Tr3s Lunas , he is committed to the chill-out trend. The album contains software (U-MYX) with which you can create your own mix.

In December 2006 Mike Oldfield could be seen live in Germany for the first time since the Millennium Concert in 1999. He was one of the headliners at the Nokia Night of the Proms . He played special arrangements of his classics "Tubular Bells" and " Ommadawn ". In addition, "Moonlight Shadow", "To France" and "Shadow On The Wall" could be heard. The vocals for these pieces were provided by Miriam Stockley , who had already sung for him during the Millennium Concert, and John Miles .

On March 14, 2008, three days before the UK release, Oldfield's album Music Of The Spheres was released in Germany. He then returned to his classical roots in collaboration with musicians such as the pianist Lang Lang and the New Zealand soprano Hayley Westenra . A week earlier (March 7th) the work was premiered in the Guggenheim Museum in Bilbao , Spain , in front of invited guests and with the participation of Hayley Westenra.

From 2009, Oldfield's early albums appeared in remixed versions on his new record company, Mercury. So far are Tubular Bells (June 2009), Hergest Ridge and Ommadawn (June 2010), Incantations (July 2011), Platinum and QE2 (July 2012), Five Miles Out and Crises (September 2013), as well as Discovery and the soundtrack for The Killing Fields (January 2016) has been re-released. In addition to a new stereo remix personally produced by Oldfield, the CDs also contain bonus pieces such as single B-sides, demo versions, in the case of Hergest Ridge, for the first time since 1976, his original mix from 1974, and new ones in a limited deluxe edition on accompanying bonus DVDs 5.1 surround mixes in Dolby Digital .

On July 27, 2012, he performed at the opening ceremony of the Olympic Games in London and accompanied the scenic performance with newly arranged excerpts from Tubular Bells , Tubular Bells III and In dulci jubilo (sometimes played with huge tubular bells in the back of the stage). On February 1, 2013, the remix album Tubular Beats by Mike Oldfield and Torsten Stenzel was released under the Edel label , for which Tarja Turunen recorded the vocals for the song Never Too Far .

In October 2013, Mike Oldfield announced the release of a new album on January 27, 2014. The album called Man on the Rocks , co-produced with Stephen Lipson , was finally released on March 3, 2014 and contained eleven new songs, all sung by Luke Spiller .

On January 20, 2017, his latest album Return to Ommadawn , which refers to the album Ommadawn , was released.

Collaboration with other musicians (selection)