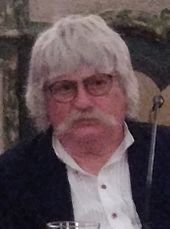 Sir Karl William Pamp Jenkins CBE (born February 17, 1944 in Penclawdd , Wales ) is a Welsh keyboardist , oboist , saxophonist and composer . Since 1975 he has been married to the Welsh musician Carol Barratt, who also wrote the lyrics for some of his works. Karl Jenkins became known for his membership in the Soft Machine and Adiemus groups .

Time at Nucleus and Soft Machine

He also studied jazz while studying at the Royal Academy of Music , and in 1970 he became a member of Ian Carr's band Nucleus . The formation was closely linked to jazz rock . The band also included drummer John Marshall and guitarist Chris Spedding in the early years . In addition to the band leader, Jenkins was the most important source of ideas. His composition Torrid Zone already indicated his later style. Typical are the consistently ostinato bass riffs, over which wind instruments and sometimes keyboards stretch out long melody lines of spherical character. Likewise characteristic of Karl Jenkins are ballad-like themes with surprisingly harmonious twists such as Crude Blues Part 1 , on which Jenkins (like Keith Tippett's Septober Energy ) also shines on the oboe , which was very unusual in rock jazz at the time .

In 1972 he moved to Soft Machine . Here, too, Karl Jenkins rose to become the most important composer alongside band boss Mike Ratledge and also replaced him on the keyboards after his band left in 1976. Jenkins met here again on John Marshall, with whom he led the group significantly up to their last LP project The Land Of Cockayne . Jenkins was also inspired to create his own pieces by the band's minimal music experiments. Ratledge and Soft Machine bassist Hugh Hopper , influenced by Terry Riley , Steve Reich and other contemporary composers, had already dealt intensively with tape loops, which in pieces like Outbloody Rageous created a trance atmosphere with repetitive tone sequences. Instead of tape loops, Jenkins layered several manually played electric pianos in pieces such as Soft Weed Factor , Penny Hitch and The Floating World to create meditative soundscapes. The soft machine LPs Seventh and Bundles largely bear Jenkins' compositional handwriting. The same applies to the following albums Softs and Alive And Well Recorded In Paris .

In the 1980s and 1990s, he wrote mainly commercial music (e.g. the famous Palladio string suite - inspired by buildings by the Renaissance architect Andrea Palladio in Venice - for a De Beers television commercial for diamonds). He achieved great success with the Ensemble Adiemus . Here Jenkins brought together his musical experiences with broad and concertante choral arrangements, which ranged from pop to symphonic and sacred choral music to ethnic music. With Adiemus , Karl Jenkins was very successful in both classical and pop music , and with his albums he achieved multiple gold and platinum status. Karl Jenkins invented a meaningless language for this, which, especially suitable for singing, should not distract from the mood with content.

Solo, Jenkins achieved a gold record in the UK in 2005 with his album The Armed Man: A Mass for Peace .

During the war in Kosovo, Jenkins created The Armed Man: A Mass for Peace , a commissioned composition for the Royal Armories , which premiered in April 2000 at the Royal Albert Hall in London. Based on a French song L'homme armé from the 15th century, texts from different religions and epochs were set to music.

For his Requiem, Jenkins resorted to numerous older antiphonies (for example In paradisum ) and chants (for example Dies irae ), which he edited and placed in connection with poems from Japan. The work premiered on June 2, 2005 at Southwark Cathedral and quickly gained popularity. In 2005, Jenkins also composed the soundtrack for the historic drama River Queen by New Zealand director Vincent Ward . In 2007 he was instrumental in Mike Oldfield's album Music of the Spheres , which was released in March 2008. His work Stabat Mater was also published in March 2008 .

His choral work Cantata Memoria: For the children premiered on October 8, 2016 at the Wales Millennium Center . This is a response to the 1966 Aberfan disaster , with a libretto by Mererid Hopwood and commissioned by Welsh television station S4C. The day after the premiere, the concert was broadcast on S4C and released as an album on Deutsche Grammophon. The US premiere followed on January 15, 2017 in New York's Carnegie Hall .