Order of the British Empire

The Most Excellent Order of the British Empire , shortly Order of the British Empire is a British order of knights , the King on June 4, 1917 , George V was donated. Acceptance into the order recognizes achievements in the fields of art and science, work for non-profit institutions and welfare organizations as well as the public service. The order is divided into a military and a civil division and comprises five ranks, the upper two of which raise their members to the knighthood under special conditions. The number of members is not limited. The order is the youngest and largest British knightly order; it has the largest number of foreign members. 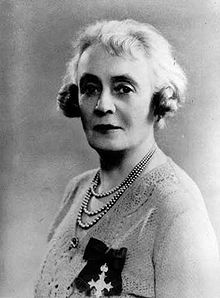 The optional version of the medal for women hangs on a bow. Photo: The Australian feminist Bessie Rischbieth with the OBE insignia that has been bestowed on her

The members of the order are divided into five levels:

With the two highest levels, if they are subjects of the British Crown, an ennoblement is connected; the honored are raised to the personal, non-hereditary nobility and henceforth carry the name sir or lady . This is placed in front of the full name. Optionally, all members of the order may use the corresponding abbreviation ( post-nominal ) MBE , OBE , CBE , KBE , DBE or GBE after the full name .

The totality of the members of the order is divided into a civil and a military division ( Civil Division and Military Division ), whereby the ribbon of the Military Division has a gray median strip in all degrees, which is missing in the Civil Division . The current British monarch, currently Queen Elizabeth II, is sovereign of the Order of the British Empire .

An affiliated medal, the British Empire Medal (BEM) , belonged to the order until 1993 . In October 2011, Prime Minister David Cameron announced that he would reintroduce this medal in recognition of excellence in the community. The first of around 300 awards were made in connection with the diamond jubilee of Queen Elizabeth II's reign in 2012. Unlike the insignia of the Order of the British Empire, which are usually presented by the monarch on acceptance into the order, the British Empire Medal is given by the lord lieutenants of individual counties. 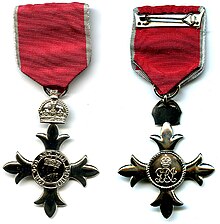 MBE (civil division), front and back 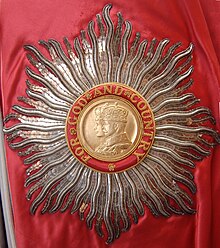 Breast star to the GBE

The insignia of the two lower levels of the order, member and officer , are worn on the ribbon as shown, whereby the medal of a member is silver, that of an officer is gold. The commander's cross is enamelled blue and is worn as a neck medal. Women always wear these three steps on the lady's bow . 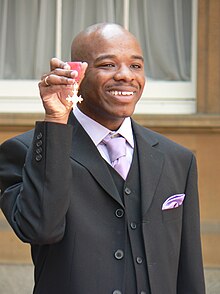 Artist Stephen Wiltshire with the cross of an MBE

As with most other orders and decorations in the United Kingdom , admission to the Order of the British Empire is based on a nomination by the Prime Minister , and today anyone can make suggestions to the government as to who should be admitted. Information brochures and forms are available in town halls and municipal offices, and advice is given on the terms and conditions of proposals. The UK Department of Foreign Affairs or the UK diplomatic missions are responsible for accepting foreign nationals, including foreign diplomats, who will forward the recommendation to the Prime Minister's Office.

Citizens of the United Kingdom and citizens of those Commonwealth states that recognize the British monarch as their head of state ( Commonwealth Realms ) can be elevated to the nobility by being accepted into one of the top two levels of the Order of the British Empire . The Knights Grand Cross and the Knight Commander is the occasion of the Order of Merit (investiture) by the monarch to the Knights (Knight) beaten and then the predicate lead Sir before their first name. Dames Grand Cross and Dames Commander do not receive an accolade, but are also ennobled and carry the title lady . Like the wives of all British Knights, the wives of the Knights Grand Cross and Knights Commander of the Order of the British Empire may have the addition Lady in front of their name; a comparable privilege does not exist for the husbands of the Dames Grand Cross and Dames Commander. The name addition Sir or Dame is usually not used by royal princes and the peers , but takes a back seat to their higher-ranking titles.

Anglican clergyman received a knighthood (knighthood) does not rule, nor the foreign members of the Order. Anyone who is not a citizen of a Commonwealth Realm has honorary membership in the order (colloquially often referred to as honorary knighthood ). Foreigners who are accepted into one of the top two levels of the Order of the British Empire and who are then often referred to in the press as "Knighted by the Queen" , such as Bill Gates , are therefore not allowed to register as "Sir William Gates III" but are correctly called "William Gates III, KBE".

There are six administrative offices within the Order: prelate , dean , secretary, registrar, king of arms and gentleman usher. The respective Bishop of London holds the office of prelate, the dean of St Paul's Cathedral is dean of the order by virtue of his office. The King of Arms of this order is not necessarily a member of the College of Arms . This position is currently held by Admiral Sir Peter Abbott. The order servant bears the title of Gentleman Usher of the Purple Rod ; but, unlike the Gentleman Usher of the Black Rod of the Order of the Garter , has no special role in state life. On July 23, 2013, Dame Amelia Chilcott Fawcett took over the office of Usher, making her the first woman to hold this position. It is appropriately named Lady Usher of the Purple Rod .

King George V founded the order on June 4, 1917 to fill gaps in the system of orders and decorations of the United Kingdom (British Honors System) . Until then, the Order of the Bath was traditionally intended for high officers and civil servants, while the inclusion in the Order of St. Michael and St. George was almost exclusively awarded to diplomats for services abroad. Members of the Royal Victorian Order were only made by those who had served in the personal sphere of the royal family (mostly members of the court).

But since there were also many others who had made significant contributions to the country, George V wanted to create a new Order of Merit that could also cover other categories of outstanding achievements. After all, he also wanted to honor those many compatriots who had made a name for themselves in the First World War .

As a result, the Order of the British Empire developed into the British Order of Merit with the most new admissions. Admission to the ranks of Member (MBE) and Officer (OBE) is usually granted for special achievements in the political, economic, cultural, intellectual or voluntary field and - in terms of their practice and frequency - is in a certain way the British counterpart to the German Federal Cross of Merit. Since the government of the United Kingdom honors not only British citizens and citizens of the Commonwealth with the acceptance into the Order of the British Empire, today there are numerous people from almost every country in the world among the members of the order.

Order chapel in the crypt of St Paul's Cathedral, London

Commons : Order of the British Empire  - album with pictures, videos and audio files