Order of Merit of the Federal Republic of Germany 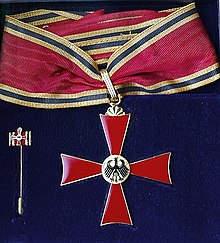 The Order of Merit of the Federal Republic of Germany , also known as the Federal Cross of Merit, is the only general merit award of the Federal Republic of Germany . It is awarded for special achievements in the political, economic, cultural, intellectual or voluntary field. The order is awarded in eight stages , including the Grand Cross in nine stages. All German states except Bremen and Hamburg also award their own orders of merit . 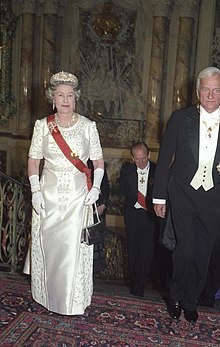 Elisabeth II with the special level of the Grand Cross (1992). Right in the picture: Richard von Weizsäcker

The Order of Merit is awarded in three classes (Cross of Merit, Cross of Merit, Grand Cross) and several levels according to international standards.

In the statute of the Order of Merit of the Federal Republic of Germany of September 7, 1951, the following order was initially planned:

The miner Franz Brandl from Nentershausen (Hesse) received the first Cross of Merit (as shown on the ribbon ) on September 19, 1951 from Theodor Heuss .

Finally, in 1955, the medal of merit was added as the lowest level and the special level of the Grand Cross as the top level, which, however, had already been awarded in 1953.

The highest level, the special level of the Grand Cross, is reserved for heads of state and their family members and, upon taking office, for the German Federal President. 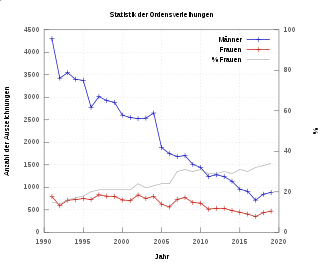 Since the proportion of women among the around 6,000 orders of merit awarded annually in the early 1980s, including around 1,000 foreigners at the time, was around 14 percent during the term of office of Federal President Karl Carstens (1979-1984), which prompted him to do so in the year 1983, to write in the new version of the implementing provisions for the statute of the Order of Merit that "special attention is to be paid to merits in activities which, after life experience, are mainly carried out by women".

In October 2006, the then Federal President Horst Köhler also introduced a quota system for women of at least 30 percent. This minimum was reached for the first time in 2007 at 30.3 percent and was maintained in the following years (2008: 31.2 percent; 2009: 30.5 percent). The proposal lists of the Prime Ministers of the federal states , through which the applications for orders are primarily submitted to the Office of the Federal President , are only accepted if at least three of ten people to be awarded the Order of Merit are women. If not enough women are proposed to the federal states to meet this quota, this resulted, for example, in Saxony-Anhalt (As of 2014) on the fact that men were not promptly proposed to the Federal President's office for honoring, but were placed on a growing waiting list and can only receive their award after a long waiting period.

The end of 2010 it was announced that since the mid-1990s, a not publicized agreement between the parliamentary groups there, since the pro legislature 30 medals are reserved regardless of actual earnings for members of parliament in accordance with the Group strengths. The constitutional lawyer Herbert von Arnim described this as “absolute presumption” and “completely new form of self-service”.

The Order of Merit of the Federal Republic of Germany is awarded in eight or nine stages (as of 2019). Another level was awarded from 1952 to 1966, it was called the Cross of Merit on Ribbon for Anniversaries . 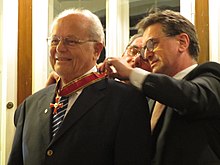 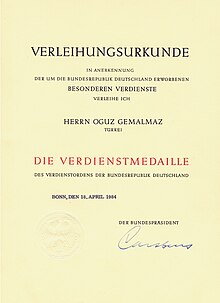 Every year more than a thousand people are honored on proposal. By July 18, 2019, the award had been presented a total of 258,515 times. In 2018, 1282 people were honored. In the case of an initial award, a maximum of the second level (cross of merit on ribbon) and a maximum of the first level (medal of merit) to people younger than 40 years of age is usually awarded. A higher level is only chosen in exceptional cases.

See also : List of bearers of the Federal Cross of Merit (exceptional awards)

The Order of Merit of the Federal Republic of Germany cannot be awarded posthumously according to the ordinance law. Nevertheless, Jürgen Schumann and Dominik Brunner , for example, received the awards posthumously. In these cases, the circumstances of death are usually the reason for the award.

The first award is generally the Medal of Merit or the Cross of Merit on Ribbon. There is no minimum age to be awarded the Medal of Merit. For the Cross of Merit on ribbon, the person to be honored should be at least 40 years of age. The award of the next higher order level requires new achievements worthy of distinction and a corresponding intercalary period . An exception to these provisions is possible for particularly outstanding achievements.

Imparted by the Federal President Award is usually the prime minister , a minister of the Federation or of the country, the provincial government , the district administration , the mayor or the mayor presented. Foreign Germans and foreigners often receive it from the responsible German ambassador . In some cases, the Federal President will hand it out himself, mostly at higher levels.

Diplomats who leave their host country after a long stay receive the Cross of Merit in accordance with international custom: Ambassadors and some military attachés are honored without the usual examination procedure at medal awards. The Argentine Colonel Juan José Masi , military attaché at the Argentine embassy in Bonn from 1977 to 1980, who is accused of serious human rights violations, received the Grand Cross of Merit in this way in March 1981 .

The procedure of the public award is usually held in a festive manner, the highest award levels are personally carried out by the incumbent Federal President . Each honored person is introduced with some information about their life and work.

Everyone can encourage another to be honored. To do this, he turns to the State Chancellery of the country in which the nominee is domiciled . If the person lives abroad or is a foreigner, the Foreign Office is responsible for the proposal. The award of an employee of a federal authority can be suggested to the responsible federal minister . The respective protocol department has the task of checking the information before it is forwarded to the Ordenskanzlei in the Office of the Federal President . In practice, above all authorities , institutions do, Business and sports associations suggestions. In contrast, suggestions from the population are rare: in North Rhine-Westphalia, the most populous federal state, an average of almost 850 awards were suggested between 2003 and 2012, more than half of which were actually carried out. The rejection rate in NRW averaged 42.1 percent. According to the limited data available from other countries, the rates there are similar.

In addition to the right to propose the award of the Order of Merit, there is also the suggestion to withdraw an already awarded Order of Merit.

Despite the previous test procedure, the award was also given to people who were later revoked. For example, Heinrich Bütefisch was proposed for the order by members of the Federation of German Industries in 1964 . The Düsseldorf Order Department apparently found nothing against him at the Constitutional Court and the Ministry of Justice, Bütefisch received the order - 16 days later it was stripped from him. A citizen had pointed out that Bütefisch had been sentenced to six years in prison in the IG Farben trial in 1948 for “exploiting the work of concentration camp inmates”.

From the ribbon level onwards, the medal insignia is available in a different version for men and women. The women's versions are characterized by somewhat smaller crosses and medallions as well as a narrower ribbon (from the Great Cross of Merit level ), which is always designed as a women's bow.

Because of the large number of items on the one hand and the cost consciousness on the other hand, the medals are now only machine- stamped from a copper alloy and provided with a gold coating ; colored parts are made of artificial enamel . Manufacturer of the official medals of the Federal Republic of Germany is the company Steinhauer & Lück in Lüdenscheid .

→ Main article : List of bearers of the Federal Cross of Merit

The grand cross is carried on a broad band from the right shoulder to the left hip. The corresponding golden star is worn on the left side of the chest.

The Great Cross of Merit with a star is worn on a ribbon around the neck.

The medal of merit is worn on the ribbon on the upper left side of the chest.

The Free Hanseatic City of Bremen was the only state to vote against the foundation of the Federal Order of Merit. Bremen and Hamburg are also the only countries that have not donated their own Order of Merit.

It is not a Bremen custom to give or wear medals. The Senate of the Free Hanseatic City of Bremen once stated in 1893: “It has long been the custom that decorations from Senate members are never accepted, and so it is advisable - apart from other reasons - to adhere to this for that very reason. Also because the Bremen Senate is not in a position to respond to such courtesies. ”Mayor Theodor Spitta reaffirmed this custom in 1952 to Federal President Theodor Heuss . But there were and will be medals of honor such as the Bremen Medal of Honor or the Senate Medal for Art and Science of the Free Hanseatic City of Bremen(as in Hamburg) awarded. There was only one exception due to the war: the Hanseatic Cross was an award given during the First World War and was jointly donated in 1915 by the three Hanseatic cities of Hamburg, Bremen and Lübeck for services in the war.

According to a principle that dates back to the 13th century and was confirmed in a Senate resolution of 1963, some Hamburgers reject “awards from foreign gentlemen” ( Hanseatic and awards ). Former Senator Emilie Kiep-Altenloh had been proposed for the Great Cross of Merit . Thereupon there was a small inquiry of the SPD in the Hamburg citizenship in May 1963. Mayor Paul Nevermanndeclared that the Senate continues to stick to its traditional motto: no medals for senators. Regarding suggestions from other sources, the Senate will comment on the awarding body to the effect that the award should not be granted. The Free and Hanseatic City of Hamburg honored Emilie Kiep-Altenloh in 1963 with the Mayor Stolten Medal .

Commons : Order of Merit of the Federal Republic of Germany  - Collection of images