So-called Hustaler , medal around 1717 to commemorate the death of the Bohemian reformer Jan Hus

Napoleonic Medal of Valor from 1812 ( Battle of the Beresina )

A medal (ital. Medaglia, Latin. Metallum = metal, French. Médaille) is a coin-like memento mostly made of metal with pictorial representations and occasional inscriptions. Medals also serve as awards of honor and merit. They convey a wealth of information and clearly demonstrate the change in styles in art since the Renaissance .

The word coin comes from the French and goes medieval Latin Medallia "small coin" back to Latin metallum "metal". Medals were first used as art objects in the Renaissance , using the Roman heavy money as a model. Originally, medals were cast from metal . With a few exceptions, medals have also been minted since the establishment of coinage methods. Medals can be produced in positive or negative embossing . With greater depth of the motifs, they can take on the character of a small sculpture .

Medals should not be confused with coins . Coins are minted as an official means of payment and given a face value from around the 18th century (sometimes much earlier). They can only be produced and issued by the state or official side. In contrast, medals (subject to a few restrictions) can e.g. B. can also be produced by companies , associations or private individuals.

Sometimes it can also happen that coins are mistaken for medals. First of all, the particularly extensive embossings, such as B. the Weidenbaumtaler of 1627 initially considered medals, but they are Reichstaler.

In the case of hermaphroditic coinage , it can happen that two different coin dies are put together so that the resulting coinage is used for a medal (hybrid medal).

The medal is similar to the plaque and is sometimes confused with it. Badges usually show a raised representation on one side, whereas medals have images or text on both sides. The fact that the front and back ( obverse and lapel ) of the medal are usually designed differently explains the phrase “the other side of the coin”. This expresses the fact that the matter mentioned can have not only advantages, but also disadvantages. (The term reverse side is a German version of reverse that emerged in the second half of the 18th century and prevailed despite opposition from the lexicographer Adelung .)

In sport in particular, honoring the three best athletes or teams with a gold , a silver and a bronze medal is known as an alternative or in addition to the presentation of a trophy . According to the above definition, however, these are often badges . The numismatically precise naming is therefore not reflected in common usage.

Occasionally, medals are minted from melted metal parts of a special origin, e.g. B. Pieces from a crashed airship or a locomotive, copper sheet from the roof of a town hall or a church.

Gold medal for the 1980 Olympic Games in Moscow 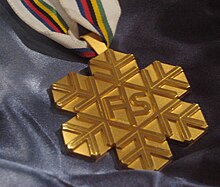 Gold medal for the ski world champions of the FIS

Medals are awarded at many important sporting events. Well-known examples are the gold, silver and bronze medals for first, second and third place at

In cases where several athletes achieve the same result, the corresponding medal can also be awarded multiple times. The multiple places awarded will be left out in the further placement, that is, there will be no second or third place and therefore no silver or bronze medal winners. In some sports a bronze medal is guaranteed by reaching a semi-final. There the small final between the losers of the semi-finals will not be played and both will receive the bronze medal. This is the case , for example, in the Olympic boxing competitions .

Most of the time, the gold content of supposed "gold medals" is only available in small amounts or as a coating; z. B. an Olympic gold medal consists of 92.5% silver and only has a gold coating of at least 6 g.

An Olympic gold medal at the 2016 Olympic Games weighs around 500 grams and contains one percent gold. After the gold price in July 2016 and the gold component, the medal is worth around 191 euros.

Medals in the school education system

The following are awarded for outstanding scientific achievements (selection):

Gold medal of the Leipziger Messe

Medals from the artistic field

The following are awarded for achievements in social areas:

Friedrich August Medal, made in silver, minted in the Muldenhütten mint

For military achievements, bravery, but also as a wounded badge , z. B. awarded:

Medals of Merit and Honor

In addition, other public bodies also award awards for special merits in science, culture and art, business and national defense.

Other Medals of Merit:

Medals and badges from support groups

Medals and pins for recognition and self-motivation in so-called 12-step self-help groups , such as B. Alcoholics Anonymous , Al-Anon , Narcotics Anonymous (NA) and others. Ä., Are mainly common in the USA and Canada.

Locumtenenstaler . The “Schautaler” of Frederick the Wise is a medal and the first vicariate memorial in Saxony

Medals made from bisque, Böttger stoneware and ceramics

Porcelain medals and plaques made of brown Böttger stoneware or white bisque porcelain were designed, modeled, designed and manufactured in the most varied of sizes and shapes in the Meissen porcelain factory and in other ceramic factories as early as the 18th century . They can often also be decorated in color. All pieces are considered examples of medal art in professional circles and have at the same time become coveted collectibles in numismatics. In the Meissen Manufactory, such pieces are mainly created for souvenir purposes, for anniversaries of cities, communities and organizations. In addition, these pieces also serve as gifts of honor or awards, as well as commemoration. These products can also be ordered by private customers. The crossed course swords can be found on all delivered products of this type as a sign of origin and trademark. Over the centuries, concessions had to be made from a design point of view in order to do justice to the respective concerns of the client. Paul Scheurich , Emil Paul Börner , Max Esser , Manfred Wünsche and Silvia Klöde are among the best-known medalists at the Meissen Manufactory.

The company Glaser & Sohn , which was founded in Alt- Dresden in 1868 , has been operating as the 1st Dresden Medal Mint Glaser & Sohn GmbH since German reunification . Under the focus Made in Germany , the sports club SuS Phönix Bielefeld 09 e. V. published TuWas-Magazin 2014 under the title Medals from Germany an illustrated article about traditional manufacturers and mints of medals that remained in the Federal Republic of Germany . For example, the company STUCO from Speicher in the Eifel, which is a cooperation with the German Athletics Association, was presented . The companies Intertecnica in Bonn , the company Die Neue Linie (DNL) based in Burgthann and the environmental protection concept of the art embossing institute HENECKA in Pforzheim were also presented, some with examples . Ceramic medals made from bisque and Böttger stoneware have been available from the Meissen porcelain factory since the 18th century.