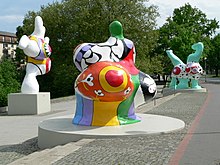 A sculpture is a three-dimensional, physical object of the visual arts . The terms plastic and sculpture are largely used synonymously today. Both terms can be used both for a single work of art and for sculpture as a genre as a whole .

The originally differentiated meaning - a sculpture is created by applying material and modeling, a sculpture, on the other hand, by hewing and carving - is seldom in common use today, but is widespread in the technical languages ​​of the arts, such as art history and classical archeology . 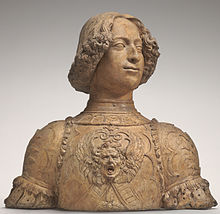 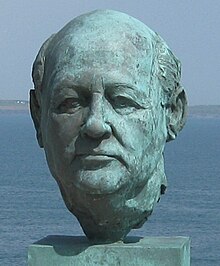 The word plastic for a work of art made of molded material was borrowed from French into German in the 18th century . The French noun plastique is a noun of the adjective plastique "malleable". The adjective in turn goes back to Latin [ars] plastica "forming / shaped [art]" and this in turn is synonymous with πλαστική [τέχνη] plastikē [téchnē] in Greek .

Related words in Greek are πλάστης plástēs (“ sculptor ”, actually “shaper”) and the verb πλάσσειν plássein (“to form”). Etymologically related words in German are plasma and plaster .

Some authors would like to differentiate in the sense of the original meaning of the word: A plastic (or a plastic in the narrower sense) is created by “applying” soft material and building it from the inside out; on the other hand, a sculpture is created by chopping off and cutting away stone or wood. At least in the case of individual works of art, it is possible, although not generally customary, to understand this fine distinction in language use. In the German dictionary of the Brothers Grimm, the narrower meaning is mentioned under plastic : “the fine arts, which physically represent the organic forms themselves (through shaping, carving, chiselling, casting), in the narrower sense the art of molding and modeling”.

The differentiated use of words is the exception in everyday language today. Work steps such as the processing of a casting mold or the fine work on a plaster model also deprive this classification of general validity. The material possibilities and design techniques have expanded so much, especially in modern times, that a differentiation between the terms based on the type of design is no longer possible for an entire art genre.

The term plastic is also used today outside of the fine arts, especially in plastic surgery , and occasionally for objects in the field of technology.

Small sculpture is a common generic term for works of art in the "showcase format", for example works made of ivory. An example of a large sculpture is Gerhart Schreiter's Memento maris in Bremerhaven, a modern sculpture made of concrete and steel.

Open sculptures are visible all around, this is where they differ from a relief . Common forms include the statue and the bust .

Depending on the material, a distinction can be made among other things: Works of art made of stone (see stone sculptor ), wood (see carving ) and metal (see metal sculpture and bronze sculptures as well as art casting ).

There is a smooth transition to physical objects in newer art genres such as installations or works of Land Art .