Carving a wooden spoon in Africa

Carving is a technique primarily used in woodworking . The term is used to describe the processing of wood , ivory and other materials with knives, carving irons and other sharp tools. In wooded areas, numerous professions were linked to the activity of carving, such as spoon-maker and schnefler . Today, carved products and sculptures are increasingly industrially manufactured with CAD- controlled copy milling machines . Closely related to the carving is the turning, the relevant work is that of the turner . The artistic, cutting and notching processing of metals is usually referred to as engraving .

The shape of the workpiece is created by removing small pieces of material. In terms of method , it is therefore similar to the stonemasonry and contrasts with other methods in which the form is created by joining individual parts or by three-dimensional modeling. Nonetheless, the language also uses the term wood plastic . A modern form of carving is chainsaw carving.

The job description Schnitzer comprises the wood carver in general and the carver (Holzbildhauer) in particular. A distinction is made between carving , which describes the production of works of art by working with wood, and handcrafted carving, which is understood to mean the production of everyday objects and the decoration by carving ( e.g. chip carving ).

There are around a thousand different carving tools (also called chisels, carving knives, carving tools, or just iron), which differ in width (0.5 mm - 80 mm) and cutting edge shape (flat - round, V-, U-shape). The shape of the cutting edge is also known as a stitch. The engraving is the imprint that a carving tool leaves when it is pressed vertically into the wood. There are irons with straight, curved or cranked blades. Various knives with straight, curved, convex and concave blades are also used. Some carvers are very fond of using the kogatana .

The carver has special names for his tools.

U-shaped carving tools are used to z. B. to model hair or eyes.

V-shaped tools are called " goat feet ". This is used to carve corners, hair or straight edges. These irons consist of two ball irons that are at different angles to each other. The usual commercial angles are 90 °, 60 °, 55 °, 45 ° and 35 °. The curly goat foot has a special position, the edges of which are curved so that z. B. Carved finger spaces.

In addition to these cutting edge shapes, there are also special shapes such as channel, Schaller, macaroni or backery irons.

Another form is the flower iron. This is a tool in which the blade width tapers towards the rear and the shaft of the iron is only thinly forged. These irons are needed in order to have enough freedom of movement in small depressions.

The carving tools are either sharpened by hand on oil or water stones or with the help of electric grinding machines. Pay attention to the temperature during grinding. The cutting edges are so thin that the frictional heat in electrical machines quickly burns out the material. That is why many Schnitzer prefer wet grinding machines in which a slowly rotating stone runs in a water bath. In addition, there are no sparks, which significantly reduces the risk of fire in a woodworking workshop.

For larger jobs, the carver uses a hammer with a round head, the mallet . This drives the iron through the wood. Mallets are traditionally made of hardwood. Mallets with hitting surfaces made of polyurethane or bronze are now also available in stores. Polyurethane is slightly elastic and easy on the books of the tools. Bronze mallets are very easy to guide due to their high mass in relation to their size and are therefore well suited for small jobs in hard wood.

Accidents often happen when handling tools, and working with carving knives in particular is always a risk. Correct fixing of the workpieces and working with sharp tools can significantly reduce the risk. Sharp tools require less force to cut than blunt ones. Basically you always work away from the body with the blade side.

The workpiece can be fixed with various brackets. Wooden panels for reliefs are held either on a wooden panel from below with screws or in a stable frame with wedges. Figures are held with the help of a carving gallows . The carving gallows consists of two hardwoods that are connected by a movable joint. Traditionally, the gallows is clamped to a workbench . The workpiece has a hole in the bottom into which a figure screw is screwed. The figure screw has two different threads . The end that screws into the workpiece is tapered so that it grips better in the wood. At the other end there is a normal thread on which a large toggle nut is screwed. The carving gallows has either a row of holes or a slot at the front to attach the figure screw. To turn the figure, the toggle nut is slightly loosened, then the figure can be aligned and fixed again by tightening it again.

Smaller parts, such as furniture decorations, are glued to a wooden board with an intermediate layer of paper with thinned wood glue. After the work is finished, the part can be removed from the base with a spatula .

There is also the option to carve smaller figures by hand. Mainly normal carving knives are used. The risk of injury is increased with this type of carving.

Short-grain, homogeneous types of wood are used for carving. The most popular wood carving is linden. This can be used to produce detailed, fine carvings. The hard boxwood is also often used for detailed carvings. The light maple wood is also used quite often in carving. Swiss stone pine is soft, but it has many knots and darkens over time. Instead, the stone pine spreads a pleasant scent that many like. Wood carvers who work with a chainsaw also like to use brown elm wood, which has a beautiful wood pattern. Other wood carvings are poplar, birch, oak, white pine and Swiss stone pine, as well as various types of fruit. Many woods require a long drying time in order to keep the tendency to tear as low as possible.

The carving of fresh branches and sticks is called green wood carving. The soft green wood of deciduous trees such as hazelnut, birch, alder, ash, poplar, linden or willow is so soft that it can also be easily processed by children.

The carvings in animal bones include antlers and horns as material . Carving with animal bones is traditionally practiced in many peoples and results in the ornamentation of a bone or the creation of a figure. Animal bones are now used as a cheap and legal substitute for ivory.

Ivory is one of the most durable materials that can be carved, which is why there are also oldest evidence of this art of carving (e.g. the 35,000 to 40,000 year old Venus vom Hohlefels ). The first carving tools for ivory carving were flint blades, while high-speed precision tools have recently been used.

During ice carving, a block of ice made using a special process is carved into a sculpture. The ice sculptures are beaten and carved on the basis of templates with the help of saws, hammers, files and machetes, and are melted with warm water.

There are a number of materials that are suitable for carving. In America, coin carving ("hobo nickel") is widespread, an art form in which coins are provided with a new relief. In addition, figurines can be made from vegetables (e.g. pumpkins or turnips) and carvings made from shells and even stone are widespread in Asia. Other examples of materials used for carving are wax, plaster of paris, some soft metals, or concrete.

Professional carvers like to use so-called carving blanks . These are pre-milled pieces of wood. Due to the cost pressure, the pieces of wood are preprocessed in copy milling machines. These blanks still have to be completely carved over. Depending on the quality of the milling and the details of the work, the carver can make a relatively large number of copies of a work in a short time. Nevertheless z. B. a figure as "hand-carved" if it has been completely reworked with carving knives.

Model carving is associated with an increased level of difficulty . In contrast to the raised carving of classic relief work, a negative is worked in depth. The additional challenge is that the right and left side of the motif in the negative have to be swapped in order to reproduce the original motif in the later place. You carve in mirror image. 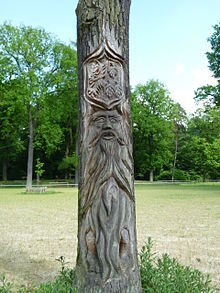 Carvings are available in “natural”, “colored” or “frame” in stores. In order to maintain the natural surface of the wood, the carving is treated with oils or waxes. These provide surface protection that protects the wood from moisture and dirt. Colored means that the color of the wood is changed with paint or stains . The natural structure of the wood remains visible. The final treatment is also carried out here with wax or oil. Mounted carvings are provided with a special glue and chalk base. Most of the time, a frame is also gilded. The color design is done with covering colors so that nothing can be seen of the wood.

The German Ivory Museum in Erbach (Odenwald) has an extensive collection of carvings in ivory and ivory-like materials such as tagua .