This article looks at the horn on the head of animals. For other meanings, see Horn (disambiguation) and Horn (family name) .

A Scottish highland cattle whose typical characteristics include long horns 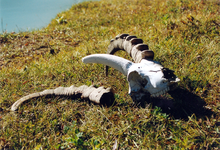 Horn detached from the skull of an ibex

Horn is the name given to the outgrowth on the head of the horn-bearers and rhinos . In a figurative sense, similar structures on the body of other animals are also referred to as "horns".

The common Germanic word mhd. , Ahd. Horn is, such as B. also the Latin cornu , a formation of the idg. Root * ker [ə] - "horn", "antler", to which the words brain and deer as well as Latin cervus go back.

Horn in the real sense

The horn of the rhinoceros is a solid outgrowth made of glued bristles . It can be cut back just as painlessly as hair or fingernails - a measure that is used in animal welfare , since rhinos are hunted almost exclusively for their horns: a rhinoceros whose horn has been removed is worthless to poachers.

Horns are used as both a container and a musical instrument .

Outgrowths from other body substances 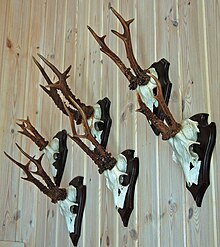 In the hunter language , antlers are called "horns". However, the deer's antlers are not made of horn, but of solid bone substance.

Rather, the "horn" of narwhals is a tusk .

In other animal groups, too, for example some beetles , one speaks of horns for analog appendages; in insects , these are formed from chitin as part of the exoskeleton .

Horn in the phrase

The saying "to put horns on someone" comes from the practice of grafting spores that have been cut from their feet into capons through a wound on their head. There they may not only grow in, but also become larger than their feet would have become: the castrated rooster, i.e. the capon, can be recognized by the "horns".

Horn in the name