This article covers different types of goats. For the pet, see domestic goat .

The goats ( Capra ) are a genus of horned bearers (Bovidae). They are ruminants (ruminant) and cloven-hoofed animals (Artiodactyla). Goats are mainly found in mountainous regions in Eurasia and North Africa as well as North America. This genus includes, among other things, the game and the domestic goat domesticated from it and the various types of ibex .

Goats are relatively sturdy animals with strong limbs and wide hooves that are adapted for climbing locomotion. They reach a head body length of 1.0 to 1.8 meters, the tail is 10 to 20 centimeters long and the shoulder height is 65 to 105 centimeters. The weight varies between 25 and 150 kilograms, with the males being significantly heavier than the females.

The coat is kept in brown or gray tones, there is often a seasonal coat change with change in coat length and color. Sometimes there are contrasting areas on the limbs, back, or face; What is striking is a beard, which is significantly longer in the males.

Both sexes have horns; however, these show a clear sexual dimorphism in shape and length . The horns of the females are short, thin and only slightly curved; In contrast, those of the males are strongly bent backwards or twisted in a spiral and can reach a length of over a meter.

Goats were originally native to Central and Southern Europe , large parts of the Middle East and Central Asia and northern Africa . Due to hunting and habitat loss, they have become extinct in parts of their original range. In contrast, the domestic goat has been introduced in the wake of humans around the world and many countries now have feral domestic goat populations. The goats' habitat are predominantly mountainous regions - in Asia they occur in areas above 6000 meters, but also in steppes and desert areas.

Goats are often crepuscular and foraging in the early morning or late afternoon; in cooler regions or seasons they tend to lead a diurnal lifestyle. The females often live in groups with their offspring, while the males are solitary or form bachelor groups for most of the year. At the mating season, the bucks join the groups of females and try to achieve the mating privilege through sometimes violent fights among themselves.

All goats are herbivores who mainly eat grass and herbs, but also nibble on bushes.

Domestication of domestic goats began at least 8,000 to 9,000 years ago, possibly earlier, making them one of the oldest commercially used domestic animals. In contrast, most wild goat species are threatened. The reasons for this lie in hunting and poaching for the sake of meat or trophies and also in the reduction of their habitat and competition from domestic animals. The Ethiopian Capricorn is loud IUCN threatened with extinction; Most of the other species are also endangered, with individual populations and subspecies such as the Pyrenean ibex already extinct. 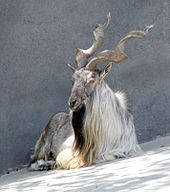 The goats are counted among the hornbeams (Bovidae) to the goat-like (Caprinae), which also include sheep and chamois . Contrary to previous assumptions, they are not very closely related to the sheep, from which they differ in their typical beard and convex head shape. 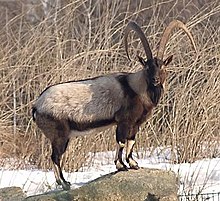 The wild goat species form a close family group with a complicated internal system. Outwardly, the different forms differ mainly in the sometimes very large horns of the male animals, while the females are also relatively similar between the species. For a long time it was believed to be able to distinguish between different species or groups of species based on the horns of the males. Alpine ibex , Siberian ibex and Nubian ibex, for example, look very similar and were considered to be particularly closely related. The fact that the areas of distribution of these three forms are separated from other wild goat species remained a mystery. However, genetic studies strongly suggest that the Siberian ibex and the Nubian ibex each represent their own species, with the Siberian ibex at the base of the genus Capra . The Alpine Ibex does not seem to be particularly closely related to these two very similar forms either. On the other hand, it is genetically similar to the outwardly quite different Iberian ibex , which is also closest to it geographically. The external similarities between Siberian ibex, Alpine ibex and Nubian ibex would therefore not be a sign of close relationship, but rather plesiomorphies . The West Caucasian Ibex, on the other hand, seems to be closely related to the wild goat and less to the East Caucasian Ibex , while the genetic proximity (in individual specimens) to the latter that has been partially established is likely due to hybridization. The screw goat, which is outwardly very different from all other goat species, genetically diverges far less from the other species than originally assumed and does not form its own side group.

Almost all wild goat forms are allopatric , which means that their areas of distribution do not overlap. Only the distribution areas of the Bezoar goat and East Caucasian ibex and that of the screw goat and Siberian ibex partially overlap. This does not lead to the formation of hybrids or transitional forms. In captivity, all goat species produce mutually fertile offspring.

Fossil goats are only known from the lower Pliocene of Eurasia. Finds of the genus Capra are limited to areas that are in the vicinity of today's occurrence area, in Europe it was widespread up to the British Isles. These goats are either of today's species or of extinct species, the best known of which is Capra priscus . This species is very closely related to the Bezoar goat and possibly even identical to it.

Despite their name, the mountain goat and the extinct cave goat are not counted among the goats .