The title of this article is ambiguous. For further uses of the term, see The Middle East . 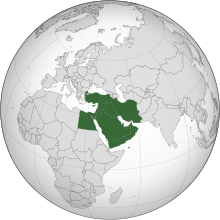 Demarcation of the Middle East

The Middle East is a geographical name that is generally used today for the Arab states of the Middle East and Israel . In particular, the region of the Fertile Crescent and the Arabian Peninsula belong to the Middle East. Often, Cyprus , Turkey (in some cases only Anatolia ), Egypt (which is mainly in North Africa) and Iran are also included.

Historically, the term “Middle East” has referred to the area of ​​the Ottoman Empire outside Europe since the 19th century .

Historical significance of "Middle East": Territories of the Ottoman Empire outside Europe from 1830 to 1920

The term Middle East is coined from a European perspective that goes back to that of the Roman Empire . After the final division of the empire in 395 AD, the Western Roman Empire (Imperium Romanum Occidentalis) and the Eastern Roman Empire (Imperium Romanum Orientalis) emerged. After the end of the Western Roman Empire around AD 476, the title “Emperor of the West” (occidentalis) was inherited by the Empire of Charlemagne , later the “ Holy Roman Empire ”, whereas the Eastern Roman Emperor had the secondary title “Emperor of the East” “ (Orientalis) wore. It was therefore a Rome-centered worldview that was adopted in the areas of the Roman successor states in Europe as well as in the Islamic Empire . From this point of view, the countries of the Middle East are in the "East", which means that there is extensive overlap with the terms " Near East ", " Orient " and "Middle East".

near and Middle East

In German, a distinction is made between the Near East, the Middle East ( South Asia , Afghanistan and often Iran) and the Far East . Creates confusion at times that the region of the Middle East in English as Middle East and in many Middle Eastern languages translated respectively as "Middle East" is referred to, including Arabic الشرق الأوسط asch-scharq al-awsat , DMG aš-šarq al-ausaṭ , Hebrew המזרח התיכון haMizrach haTichon , Turkish Orta Doğu , Kurdish rojhilata navîn and Persian خاور میانه, DMG ḫāwar-e miyāne . The G8 definition of the Middle East even includes all of North Africa (countries bordering the Mediterranean).

In English, in addition to the Middle East, there is also the term Near East , which originally corresponded to the historical Middle East term. The British term Near East was used from around 1850 until the end of the Ottoman Empire for the Balkans and the Ottoman Empire without Iran. At that time the Middle East referred to the area from Iran via Afghanistan and the Caucasus to Central Asia . If it is still used today, it is in an unspecified meaning. Many use it synonymously with "Middle East", the American dictionary Merriam Webster defines it as the countries in Southwest Asia and Northeast Africa from Libya to Afghanistan , and archaeologists, geographers and historians understand it primarily Anatolia , the Levant and Mesopotamia .

In a more religious-cultural sense, Orient or Orient is mostly used for the area of ​​the Middle East in a political or geographical sense; the Near East is blurred according to the Near East . The world of the Orient employed many European poets and writers, for example, see Johann Wolfgang von Goethe's West-Eastern Divan , Hermann Hesse's novel Journey to the East or the adventurous Orient-tales of the Hermann von Pückler-Muskau , the bestsellers were and to tell figure of Munchausen led . In terms of culture and morals, the Orient is a collection of contrary attributions and fantastic ideas in the mirror image of Western culture. One can say that the Orient is in this religious-cultural-historical sense what the Occident , the West , is not.

Overview of states, areas and regions