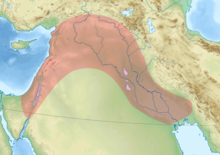 Approximate boundaries of the Fertile Crescent

Fertile Crescent ( English Fertile Crescent , Arabic الهلال الخصيب, DMG al-hilāl al-ḫaṣīb ) is the name introduced by James H. Breasted in 1916 for the winter rainy area on the northern edge of the Syrian Desert , which connects to the Arabian Peninsula in the north . The name was given by the extension of the area in the form of a crescent moon in a wide arc, which extends from the Persian Gulf in the south of today's Iraq , over the north of Syria , Lebanon , Israel , Palestine and Jordan . Occasionally, the north of Egypt is included. 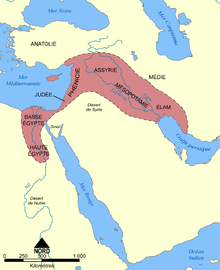 Delimitation of the fertile crescent according to today's definition

The fertile crescent is considered to be one of the regions of origin of the Neolithic revolution , the transition from the wild-hunted way of life to agriculture or cattle breeding from the 12th millennium BC. Archaeological research has shown that ethnic groups of the period Pre-Ceramic Neolithic B (PPNB) in the 7th millennium BC In the area of ​​the fertile crescent moon. There are assumptions that the climate in the 7th millennium BC BC was cheaper and more rainy than before and after, which could have made an advance into steppe areas possible. Grains ( barley , einkorn , emmer ) and legumes were grown . The forerunner of the cultivated barley ( Hordeum vulgare ) is the wild barley ( Hordeum spontaneum ), which occurs together with the wild emmer ( Triticum dicoccoides ) in the region to this day. Archaeobotanical studies in the north of the Fertile Crescent in the 1990s showed that for prehistoric hunters and gatherers, in addition to wild grains that were previously considered essential for food supply, the supply of vegetables and other plants also played a role in settling down.

The first domesticated animals were goats, followed by sheep and later cattle and pigs. The fertile crescent was in the range of wild cattle. At the beginning of the 6th millennium at the latest, sedentary farmers raised the first domestic cattle. While rain-fed agriculture is possible today in the north and in the Levant in the west, with rainfall of 400 to 900 millimeters per year, in the southeast, with rainfall of less than 250 millimeters, a harvest can only be achieved through artificial irrigation.

Some of the earliest urban cultures arose in the area of ​​the Fertile Crescent: Eridu , probably the oldest Sumerian city, and a little later Uruk in Mesopotamia in the 4th millennium BC. The fertile crescent included the kingdom of Akkade in the 3rd, the Assyrian Empire in the 2nd and Phenicia in the 1st millennium BC. Chr.

In 1918, the British engineer William Willcocks tried to locate the Garden of Eden, presented in the beliefs of Judaism, Christianity and Islam, at four canals in ancient Babylonia between Ramadi and Baghdad . Since then, further suggestions for localization have been made further north in the area of ​​the Fertile Crescent. 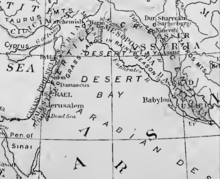 The Fertile Crescent appears for the first time on a map by James H. Breasted as a green-colored, horseshoe-shaped arch with the opening to the south. Breasted provides a description of the area for antiquity , which accordingly extended from Palestine on the eastern Mediterranean to Assyria at the apex to Mesopotamia in the east, bordered by deserts in the south and by the mountain ranges of Anatolia in the north . The Euphrates and Tigris are the main rivers of the Fertile Crescent. The moderate rains in winter provided green pastureland, which for millennia provided the habitat for cattle nomads and gave rise to high cultures. According to Breasted, the ancient history of the Middle East can be described as the struggle of the nomadic desert dwellers against the peoples from the northern mountains for the area of ​​the Fertile Crescent. The nomads were therefore Semitic peoples who from 3000 BC. Moved northwest from the desert of Arabia and settled in Palestine, where they later appeared as the Canaanites and further north on the Euphrates as the Amurites .

Even if the term “fertile crescent” was adopted many times soon after Breasted's introduction, Albert T. Clay noted in 1924 that the narrow green band on Breasted's map leaves several hundred kilometers free on the middle reaches of the Euphrates and Tigris - areas with old irrigation agriculture who instead attributed Breasted to the desert bay . Mari , located on the central Euphrates, must have been in Babylonian times in the 2nd millennium BC. BC were surrounded by fertile farmland that was flooded over a large area during floods. Authors in Roman times have already noticed the steady soil degradation . Because the Euphrates gradually washed away the fertile soil, its river bed is now narrower and deeper than it was then. The areas outside the irrigated river plains are desert-like today. The southern limit of Breasted's Band of the Fertile Crescent in the central area corresponds approximately to the 250-millimeter isoline up to which rain-fed agriculture is possible. On many maps, the area is shown much wider and occasionally includes almost all of Syria. In a figurative sense, the countries as a whole can be meant that have a share in the Fertile Crescent.

Northern Egypt is separated from the Fertile Crescent by the Sinai Peninsula and is not on the Asian, but on the African continent. Because of its historical connection to the ancient empires of Palestine, Lower Egypt is now sometimes viewed as either a continuation or part of the Fertile Crescent.

Robert W. Braidwood (1948) saw the hilly flanks , the water catchment area of ​​the Euphrates and Tigris in the low mountain ranges on the edge of the Fertile Crescent, reaching in the east to the foothills of the Zagros , as a center of early domestication.