The title of this article is ambiguous. Further meanings are listed under barley (disambiguation) . 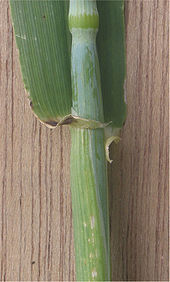 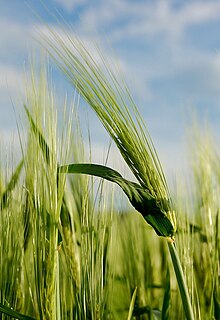 Barley field in May 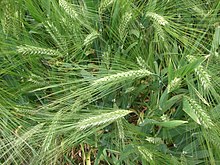 The barley ( Hordeum vulgare ) is a plant from the genus of barley ( Hordeum ) within the family of grasses (Poaceae). It is one of the most important types of grain . It was obtained and domesticated from wild barley ( Hordeum spontaneum ) around 10,000 years ago in the area of ​​the Fertile Crescent . The seeds of the plant are also referred to as “barley” (in the sense of barley grain or “barley grains”).

Barley is an annual grass that reaches heights of 0.7 to 1.2 m. The plant is smooth and hairless. The stalk is upright. The alternate and two-line (distich) arranged leaves are simple and have parallel veins. The flat leaf blade is 9 to 25 cm long and 0.6 to 2 cm wide. The most important morphological identifying features are the two long, unlashed leaf auricles of the leaf sheath , which completely surrounds the stalk. The narrow and slightly toothed ligule (ligula) is 1 to 2 mm long. The thousand grain weight is 35–50 grams.

The annual inflorescence has a flexible, so non-fragile rachis , in this it differs from the other Hordeum species. The rows of sessile spikelets are all equal and fertile . The spikelets usually contain only one flower , rarely two. The glume is linear-lanceolate . The awns are 8 to 15 cm long.

The year-old fruit cluster with long awns is inclined to drooping when ripe. From a botanical point of view, the grains are caryopses , i.e. solitary closing fruits.

Barley is divided into two-line and multi-line forms based on the different ears. The two-line forms ("Hordeum distichon") develop only one grain per attachment point, which is full and strong. The multiline forms of Hordeum vulgare have three grains per attachment point, which develop more slowly. Two-row barley varieties (mainly spring barley) contain a lot of starch and little protein. They are mainly used in beer production as brewing barley ( malt ) and are processed into barley barley. Four- and six-row barley varieties are predominantly winter barley varieties that (in contrast to summer cereals sown in spring) are sown in autumn and need vernalization for shooting . Due to the longer vegetation phase and the effective use of winter moisture, the yields are higher and the nutrients are favorable for use as feed barley. Newer winter barley varieties with high levels of protein and fiber are only grown for human consumption.

Barley originates from the Middle East and the Eastern Balkans . The oldest evidence of barley use goes back to 15,000 BC. Backdate. Barley is closely related to wild barley ( Hordeum vulgare subsp. Spontaneum ) found in the Middle East . As a classic grain of antiquity , it was cultivated in Mesopotamia and on the Nile more than 8000 years ago . In many areas, barley was an important staple food in the form of porridge or soup for millennia; Barley, einkorn and emmer were the first types of grain cultivated by man. From around 7000 BC The systematic selection of breeding began and since the Neolithic Age (5500 BC) barley has also been grown in Central Europe.

In the case of wild barley, the ripe grains fall out of the ear and have to be laboriously collected. Cultivated barley probably arose from a non-targeted selection of people who preferred to harvest and cultivate a mutation in which the ripe grains remained in the ear.

In the Middle Ages, barley was valued as a high-yield fodder and as a filling food. By breeding undemanding varieties, the yields can compete with those of wheat. In addition to increasing quality, breeding also tried to produce a technically more manageable awnless barley. This has been successful (varieties such as Ogra , Nudinka), but the shape has not caught on . It should not be neglected here that the awn is also photosynthetically active.

Barley is also said to have medicinal properties. Mashed barley ( Ptisane ) is already described in detail by Hippocrates of Kos . The soluble barley fiber is of medical interest. Barley varieties with a high content of beta-glucans (β-glucans) are offered to help maintain normal cholesterol levels. Beta-glucans are used by the intestinal bacteria as a source of energy. Barley beta-glucans reduce the rise in blood sugar levels after meals. A daily intake of 3 g of beta-glucan from barley has been shown to reduce blood cholesterol levels. Accordingly, a health claim can be made for barley varieties with a high content of barley fiber, in particular the soluble beta-glucans (more than 4 g per 100 g) . The following labels may be used on ready-to-eat foods:

Barley has hardly been used as a renewable raw material . The grains could be used as a source of starch. In so-called “waxy barley”, the proportion of branched-chain starch amylopectin, which is interesting for technical uses, was increased to over 95% of the total starch . Waxy barley contains around 50% more beta-glucan than brewing and feed barley.

Structure of the grains

With the exception of naked barley, the grains are firmly fused with the husks . They must therefore be peeled off before they are prepared for human consumption. This used to be done in the mill using a tanning process , today this work step is done in a peeling mill . In barley, unlike oats, the health-beneficial soluble fiber beta-glucan is not concentrated in the outer layers of the grain (bran), but rather in the light-colored interior. Barley contains gluten , which can lead to health problems for people with gluten intolerance.

The composition of barley naturally fluctuates, both depending on the environmental conditions (soil, climate) and the cultivation technique (fertilization, plant protection).

The physiological calorific value is 1320 kJ per 100 g of edible portion.

Products made from peeled barley grains

Depending on the work equipment, barley straw can be softer and more absorbent than wheat straw, but it is only possible to a limited extent as litter. Remains of awns can in susceptible animals (horses, pigs) u. a. cause irritation of the respiratory tract.

Barley grass is often used in animal fattening . In addition to vitamins B and C, it also contains calcium , potassium and iron in larger concentrations. The leaves of the young barley plant are freeze-dried for consumption. This powder is dissolved in cool water and taken. The taste is somewhat reminiscent of diluted spinach .

Barley grain as a basic measure

Since a grain of barley has a relatively constant size, it used to form the basis for some measures and weights, including the Arabic Habba and the Persian Jou , see also Gerstenkorn (unit) .

The barley is one of the self-fertilizers; a distinction is made between winter and summer barley. Winter barley sown in September is more productive. Temperatures below 10 ° C are ideal for growing winter barley. The winter barley freezes at long-term temperatures below −15 ° C. The formation of secondary shoots (tillers) is completed before winter. The ear-bearing stalks develop from them next spring. Barley thrives best in deep, well-moistened soils, but it can also cope with less favorable conditions. As a rule, the annual grain harvest begins with the winter barley.

The spring barley is sown in late February to early April. It matures in less than 100 days. After the tillering, shooting and ear pushing phases, flowering and harvesting follow.

As with all types of grain, barley must also be checked for moisture before storage, otherwise there is a risk of mold growth (risk of mycotoxins ). The upper limit of grain moisture for storage is 15%. 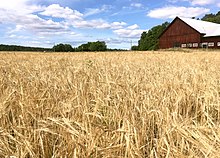 According to the Food and Agriculture Organization FAO, around 141.4 million t of barley were harvested worldwide in 2018 . The following table provides an overview of the 20 largest producers of barley worldwide, who harvested 83.2% of the total.

Compared to the above figures, the world harvest in 1928 was 36.3 million tons, of which 2.8 million tons in Germany.

The Federal Ministry of Food and Agriculture (BMEL) published the following preliminary figures for 2019 on harvest volumes in Germany: