Tyrosine (abbreviated Tyr or Y ) is in its natural L form a non- essential proteinogenic α - amino acid that is found in most proteins . Tyrosine is the starting substance for the biosynthesis of DOPA , dopamine , catecholamines , melanin , thyroxine and tyramine . In many animals, biosynthesis takes place from the essential amino acid phenylalanine , and impairment of this pathway can trigger a variety of defects.

Tyrosine has a stereocenter, so there are two enantiomers . Whenever "tyrosine" is mentioned in this text or in the scientific literature without any additional name ( prefix ), the naturally occurring L- tyrosine is meant. 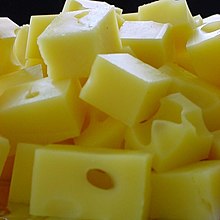 L -Tyrosine was first characterized by Justus von Liebig in 1846 as a protein component of cheese ( ancient Greek τύρος týros , cheese '), hence the name. It is found in large quantities in casein .

The following examples give an overview of the tyrosine content and each relate to 100 g of the food; the percentage of tyrosine in the total protein is also given:

All of these foods contain almost exclusively chemically bound L- tyrosine as a protein component, but no free L- tyrosine.

Depending on the pH value , tyrosine can be present as an “inner salt” or zwitterion . The proton of the carboxy group attaches itself to the free electron pair of the nitrogen atom of the amino group :

The zwitterions do not migrate in the electric field because they are uncharged to the outside. The isoelectric point is pH = 5.66 for tyrosine; at this pH value it has its lowest solubility in water.

Isolated L- tyrosine fluoresces - like many other aromatic compounds - when excited with UV light .

With a suitable diazo component, tyrosine forms a red azo dye and can thus be qualitatively detected using the Pauly reaction .

The L -tyrosine is a proteinogenic amino acid. It is required as a building block for the construction of numerous proteins during translation .

L- tyrosine is of particular importance in proteins that are involved in signal transduction processes. It functions here as a recipient of phosphate groups, which are transferred by protein kinases and change the activity of the target protein, a receptor (see receptor tyrosine kinases ).

L -yrosine also plays an important role in photosynthesis by reducing the oxidized chlorophyll as an electron donor in photosystem II . It initially loses the proton of its phenolic OH group, becomes a neutral radical , and is then reduced again by the quadricuclear manganese cluster in photosystem II .

Biosynthesis of tyrosine from prephenate in the shikimic acid pathway

Plants and most microorganisms synthesize tyrosine in the shikimic acid pathway via chorismic acid . After the rearrangement of chorismate into prephenate, 4-hydroxyphenylpyruvate is produced by means of a prephenate dehydrogenase, from which tyrosine is then formed by transamination under the action of a transaminase .

In the animal organism, tyrosine is produced by biopterin- dependent 4- hydroxylation on the phenyl ring of L - phenylalanine . The enzyme that catalyzes this reaction is phenylalanine hydroxylase , a monooxygenase . An oxygen molecule (O 2 ) is required and this reaction creates a water molecule (H 2 O). The precursor, the essential amino acid L- phenylalanine, is taken in with food.

As a result of phenylketonuria (PKU) there may be a lack of L come tyrosine. L - phenylalanine ingested through food cannot be correctly hydroxylated in the para position, so that no L- tyrosine can be formed from phenylalanine. In this case must L -tyrosine body fed to be.

Biosynthesis of tyrosine from phenylalanine and biologically significant derivatives

Tyrosine serves as a starting material ( precursor ) for the biosynthesis of various other substances.

DOPA, in turn, is a precursor for various neurotransmitters as well as for melanin . In the adrenal medulla , decarboxylase enables the production of the catecholamines adrenaline and noradrenaline , which are released into the blood as messenger substances. The production of dopamine from DOPA takes place within the membrane in nerve cells. Melanin from DOPA is produced and released in particular by melanocytes in the skin and in the pigment cells of the eyes , where it is stored.

The degradation of L -yrosine ( para -hydroxyphenylalanine) begins with an α-ketoglutarate -dependent transamination by the L- tyrosine transaminase ( EC  2.6.1.5 ) to p -hydroxyphenyl pyruvate .

The breakdown of L -yrosine into acetoacetate and fumarate . Two dioxygenases are required for the degradation route . The end products can flow into the citric acid cycle .

With the Maleylacetacetat- cis - trans - isomerase ( EC  5.2.1.2 ) is formed in this case Fumarylacetat by rotation of the resulting oxidation (from the hydroxyl group) carboxy group . This cis-trans isomerase contains glutathione as a coenzyme . Fumarylacetoacetate can finally be cleaved by the fumarylacetoacetate hydrolase through water retention.

Here be fumarate (also a metabolite of the Citric Acid Cycle ) and acetoacetate (butane (3) -one acid) free. Acetoacetate is a ketone body which is activated with succinyl-CoA and can then be converted into two molecules of acetyl-CoA (for the citric acid cycle and fatty acid synthesis ).

Tyrosine is a precursor to neurotransmitters , especially dopamine and norepinephrine . By increasing the intake of tyrosine, its synthesis can be temporarily increased significantly, for about half an hour. However, this has only a minor influence on the mood. The step that determines the rate of the conversion in the metabolism is catalyzed and limited by the tyrosine hydroxylase , which is why the effects are less than when adding L-DOPA . It is known from animal experiments that their enzyme activity decreases sharply at high doses of tyrosine due to substrate excess inhibition, so that the dopamine level drops.

Some studies found a benefit under stress , cold or fatigue. An increase in performance in endurance sports (one and a half hour cycling) through tyrosine intake could not be determined, but through carbohydrate intake.

The dietary intake of L- tyrosine serves as a substitution therapy or supplementation in the event of deficiency, e.g. B. in phenylketonuria , otherwise an underproduction of melanin ( albinism ) and L - thyroxine ( cretinism ) results. In addition, there can be problems in the production of catecholamines .

In addition, L- tyrosine has been used for years as an adjuvant depot carrier in specific subcutaneous immunotherapy (SCIT) due to its protein-adsorbing properties . Compared to other depot carriers such as aluminum hydroxide or calcium phosphate , L- tyrosine is characterized, among other things, by the advantage of being completely metabolizable and a shorter half-life of 48 hours at the injection site.