Wikidata is the name of a freely editable knowledge database which, among other things, aims to support Wikipedia . The project was started by Wikimedia Germany and provides certain data types for Wikimedia projects as a common source, for example dates of birth or other generally applicable data that can be used in all articles of the Wikimedia projects.

Since the start of 2012, Wikidata has seen a comparatively strong growth in content pages; there are now over 88.5 million data objects (as of August 2020). 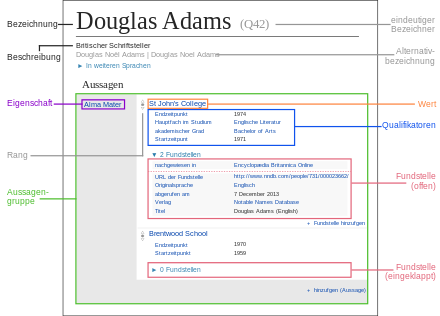 Structure of a Wikidata statement

The main namespace of Wikidata is a collection of objects (denoted by the prefix “Q” and a number immediately following it). The objects in turn consist of any number of statements and assertions (denoted by the prefix “P” for English property and a number). These properties can be further specified with qualifiers (also identified with the prefix “P”). Claims supported by sources are called statements . In the course of the integration of the Wikipedia sister project Wiktionary , which is developing a multilingual dictionary, it was possible to create lexemes directly as data objects in Wikidata.

Like all projects of the Wikimedia Foundation, Wikidata is operated on the basis of MediaWiki , which had to be expanded to include components called Wikibase in order to be able to handle structured data. Wikibase consists of the Wikibase repository, in which the data is stored and managed, and the associated Wikibase client, which can be used to access the repository.

Wikidata enables, for example, authority data to be maintained in a central location, such as the Library of Congress Authorities (LCAuth), which are used by Wikimedia projects, in particular Wikipedia . In the same way, data on program versions can be edited once in Wikidata instead of individually on many projects, which means a considerable reduction in workload, especially for smaller projects.

Development of the data object numbers on Wikidata

Example of a list of US presidents with spouses shown as a graph.

Wikidata was the first new project of the Wikimedia Foundation since 2006. The Wikidata project was first proposed in September 2004 by Erik Möller . Shortly thereafter, Magnus Manske implemented a first prototype that demonstrated the basic feasibility of the project. The actual implementation finally began in April 2012 and was financed by donations from Paul Allen's Allen Institute for Artificial Intelligence , the Gordon and Betty Moore Foundation and Google Inc. with a total of 1.3 million euros . Funding through donations officially ran until spring 2013; Wikimedia Germany planned to find follow-up financing for the period thereafter .

The Semantic MediaWiki by Markus Krötzsch and Denny Vrandečić , who both work on Wikidata (Vrandečić was Wikidata project manager at Wikimedia Germany in 2012), had a major influence on the development of Wikidata .

The one millionth data object was entered on December 15, 2012.

The project plan , which has now been completed , provided for three phases:

In 2013, IBM donated the prize money of the Feigenbaum Prize 2013 for the Watson project to the Wikimedia Foundation, specifically Wikidata, because Wikipedia had made a major contribution to the success of the project and Wikidata had set itself the goal of making people and machines lighter To provide access to knowledge.

At the end of 2014, Google announced that it would close its own fact database Freebase in 2015 in favor of the Wikidata project. In order to be able to transfer data to Wikidata more easily, an import tool was provided. By mid-2019, however, of around 10 million data records, only around 528,000 or less than five percent had been transferred to Wikidata.

The official query service that enables SPARQL queries to be carried out has been made available since October 2016 .

A survey carried out by the library service provider OCLC in 2018 showed that Wikidata ranked fifth among the linked data projects from which data was incorporated into its own offerings with 41% of respondents - ahead of WorldCat and ISNI , but clearly after the Library of Congress and VIAF . Compared to 2015, Wikidata has become more important, especially for libraries, museums and archives.

In May 2019 it was announced that the Library of Congress would integrate data from Wikidata into its authority data.

In the early days of Wikidata in particular, it was criticized that a license without copyleft was used. The quality of the Wikidata database was also repeatedly criticized. A comparative study of the data quality from DBpedia , Freebase, OpenCyc , Wikidata, and YAGO came to the result in November 2017 that none of the knowledge graphs mentioned are suitable for all conceivable purposes.

In July 2015, bachelor students from the Hasso Plattner Institute at the University of Potsdam presented a project aimed at "ensuring the completeness and correctness of the data from the rapidly growing database". For consistency check be consulted should include the data of the German National Library and the Internet Movie Database .
The logo comes from Arun Ganesh and was selected in a competition. The stylized barcode also depicts the word "Wiki" in Morse code and in the colors of the Wikimedia projects.