A molecular formula (also called gross formula ) is used in chemistry to indicate the type and number of atoms in a chemical compound . If the compound consists of discrete molecules , the empirical formula is a molecular formula . For a salt , a formula unit is given which is appropriate to its stoichiometric composition. A sum formula is often not the same as the ratio formula that specifies the smallest possible number ratios of the atoms of the chemical elements involved in a chemical compound.

The molecular formula of a chemical compound consists of the element symbols of the chemical elements contained and small, subscript Arabic numerals for their respective number in this compound. This number of atoms is always placed as an index to the right of the element symbols, whereby the number “1” is not written out. Instead of “H 2 O 1 ” for water , “H 2 O” is written.

There are different strategies for the order of the elements in sum formulas. In tables and databases, the Hill system is mostly preferred , especially for organic compounds . This gives first all carbon atoms, then the hydrogen atoms and sorts all other atomic symbols strictly alphabetically. This system makes it easier to find connections if you do not know the name of the connection.

For inorganic compounds, a different route is often chosen that does justice to the stoichiometric composition of the compounds: The element of higher electronegativity (usually further to the right or above in the periodic table) is usually to the right of a lower element in the empirical formula and in the name of the substance Electronegativity. For example, sodium chloride is written as “NaCl” rather than “ClNa”. For complex salts with the cation of the central atom and its is first ligand and then the anion with the central atom and its ligand specified, such as (NH 4 ) 2 SO 4 for ammonium sulfate . Inorganic acids are given analogously to the related salts. The hydrogen atoms are in front instead of the cations, as with H 3 PO 4 , the empirical formula of phosphoric acid . These formulas represent the formula units for stoichiometric calculations and not the structure of the compounds. 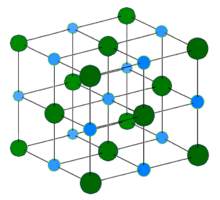 Salt crystal in the model

In the case of simple compounds, the molecular / sum formula is often the same as the ratio formula , which specifies the smallest possible numerical ratio.

On the meaning of empirical formulas