This article describes the meaning of the term ligand in complex chemistry. For meaning in biochemistry, see ligand (biochemistry) .

In complex chemistry (as well as in organometallic chemistry and bioinorganics ) a ligand (lat. Ligare = "to bind") is an atom or molecule that binds to a central metal ion via a coordinative bond (outdated also "dative bond") (" coordinate "). The coordinative bond comes about through the Lewis character of the bond partners involved: In many complexes the ligands are Lewis bases (electron pair donors) and the metal ions are Lewis acids (electron pair acceptors).

The special feature of the coordinative bond is that (in contrast to the classic covalent bond) both bonding electrons are made available by the ligand or metal ion. Complex compounds are, for example, the red blood liquor salt ( potassium hexacyanidoferrate (III) ), in which the central iron (III) ion is surrounded by six ligands, in this case cyanide ions. 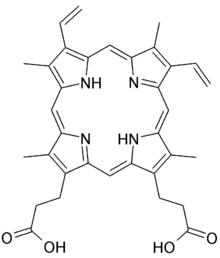 Protoporphyrin IX as a ligand for iron ions in heme b .

Examples from bioinorganics are heme and chlorophyll : here the four nitrogen atoms in the porphyrin framework act as a multidentate ligand for the central iron or magnesium ion.

The description of the metal-ligand bond as a purely donative bond is very simplistic. In the case of heavy transition metal ions in particular, the bonds usually have a high classical covalent content (for example in the case of hydride ligands). Also play back donation effects from the metal to ligand is often a crucial role in the binding strength ( binding energy ). This is the case with many ligands with π systems , since the metal centers can shift electron density into the π * orbitals; Examples of such ligands are CO , the complexes of which are called metal carbonyls , and ethene .

According to the CBC formalism , ligands can be classified as L-, X-, or Z-type. L-type ligands provide a pair of electrons for binding. These are Lewis bases such as phosphanes or the carbonyl molecule. In contrast, neutrally charged X-type ligands can only provide one electron for the bond to the central atom, which is why one electron from the metal atom is required for the bond. Examples of ligands of this type are the chlorido or cyanate ligand. In contrast, if the ligand is a Lewis acid, it is classified as a Z-type ligand. These are electron deficiency compounds such as AlCl 3 or BR 3 , so that two electrons have to be provided by the metal atom for the bond.

In organometallic chemistry, ligands have always been used to keep active metal centers stable in solution and to prevent them from agglomerating into metallic colloids ( nanoparticles ). These soluble metal complexes can be optimized into highly active catalysts for homogeneous catalysis by suitable choice of the electronic and steric properties of the ligands .