Catalyst (from catalysis - Greek κατάλυσις katálysis , German 'dissolution' with Latin ending) describes a substance in chemistry that increases the reaction speed by lowering the activation energy of a chemical reaction without being consumed itself. It accelerates the back and forth reaction equally and thus changes the kinetics of chemical reactions, not their thermodynamics .

A catalyst takes part in a chemical reaction to form an intermediate stage with the reactants , from which the catalyst is released unchanged after the product is formed. A catalyst can go through this so-called catalytic cycle many times.

Depending on the phases in which the catalyst and reactants are present, one speaks of homogeneous or heterogeneous catalysts. Biochemical processes are catalyzed by enzymes .

Chemical reactions have been carried out with the help of catalysts since ancient times . It was not until Jöns Jakob Berzelius came to the realization in 1835 that a large number of reactions only occurred when a certain substance was present, but which was not used up. In his opinion, these substances were not converted, but their presence provided the energy via their catalytic power. He called these substances catalysts.

In the following years it was possible to gain a deeper understanding of the thermodynamic background of catalysis. Wilhelm Ostwald defined the catalyst in 1895:

"A catalyst is a substance that increases the speed of a chemical reaction without being used up itself and without changing the final position of the thermodynamic equilibrium of this reaction."

Wilhelm Ostwald received the Nobel Prize in Chemistry for his work on catalysis . 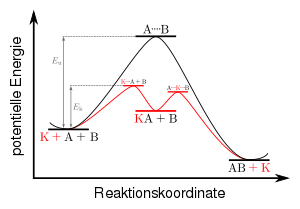 The way a catalyst works is based on its ability to change the mechanism of a chemical reaction in such a way that the activation energy is changed. One “goes another way” on the potential - hyper level .

This change in the reaction takes place via the formation of a reactive intermediate stage and its complete reaction to form the end products, with the catalyst used being reformed . In practice, side reactions cause catalysts to become ineffective after some time of use because they are blocked by by-products. The following graphic results as a section through the energy hyperpotential surface.

In the graph, the upper curve (black) shows the non-catalyzed reaction

again. The activation energy of this uncatalyzed reaction is denoted by. The lower curve (red) shows the energy profile of the catalyzed reaction. Here an intermediate stage (local profile minimum) is reached via a transition state (first profile maximum) :

The product is formed via a further transition state (second profile maximum) , whereby the catalyst is regressed:

The activation energy of the catalyzed reaction marked with is lower.

The catalytic combustion of hydrogen with oxygen can be cited as an example. This combustion is thermodynamically so favorable that it should in principle take place "voluntarily", but due to the high activation energy at room temperature it is so strongly inhibited that the reaction speed is very low. The presence of a platinum catalyst can lower this activation energy to such an extent that this reaction takes place sufficiently quickly at lower temperatures. One application for this was the Döbereinersche lighter .

Importance of the catalysts

Catalysts occur in many ways in nature. In living beings, almost all vital chemical reactions are catalyzed (for example, during photosynthesis , breathing or the production of energy from food). The catalysts used are mostly specific proteins , such as enzymes.

The lowering of the activation energy by catalysts is of great commercial importance in chemical reactions. It is currently estimated that around 80% of all chemical products go through a catalytic stage in their value chain . Without the presence of the catalyst, the respective chemical reaction would take place much more slowly or not at all. This is why it is hard to imagine chemical engineering without catalysts these days .

If several products are formed during reactions, the selectivity of a catalyst plays a very important role. The catalyst is chosen so that only that reaction is accelerated which achieves the desired product. This largely avoids contamination by by-products.

From the point of view of environmental protection , the use of selective and active catalysts saves energy and reduces the amount of by-products. Exhaust gas aftertreatment in industrial production or in power plants is no less significant for the environment . In the case of exhaust gas catalytic processes (e.g. in cars ), unavoidable, dangerous substances are converted into less dangerous ones.

Example: In a car catalytic converter , the respiratory toxin carbon monoxide (CO) and unburned hydrocarbons react with NO x and oxygen (O 2 ) to form carbon dioxide (CO 2 ) as well as nitrogen and water (H 2 O).

Hopcalites , a group of catalysts made from various metal oxides , catalyze the oxidation of carbon monoxide to carbon dioxide at room temperature.

Activated carbon heater : Salt and water serve as catalysts. It serves as a hand warmer.