Inflammation is a redirect to this article. See also: Flammability or pre-ignition .

A combustion is a redox reaction , which under release of energy in form of heat and light expires, so exothermic .

In common parlance, the term is understood to mean the oxidation of a material with oxygen to form flames ( fire ). In chemistry, such reactions without oxygen are also referred to as burns. This includes the reaction of fluorine and hydrogen to form hydrogen fluoride ; here the fluorine replaces the oxygen as an oxidizing agent .

In technology, controlled combustion is usually aimed for, which is gradually adapted to the heat demand. This is known as stabilized burning . As a reference variable z. B. the temperature of a heat carrier or the vapor pressure of a boiling liquid is used and the mass flow of the fuel and the combustion air is adapted to the heat demand. The mass flow is regulated within a framework that only slight pressure increases occur in the combustion chamber and exhaust gas path due to the thermal expansion of the combustion gases. The technical combustion is regulated and monitored in such a way that the fuel burns in a controlled manner with the supplied combustion air.

Combustions in which a larger volume of the fuel-air mixture has formed and is then ignited is characterized by the rapid spread of the combustion in the space filled with the mixture. In closed rooms, a large increase in pressure and temperature occurs in a very short time interval, which is known as an explosion . The maximum explosion pressure of fuels containing carbon and hydrogen in closed rooms with the original ambient pressure (volume deflagration) is 10 bar; the flame speed is in the range of 0.5 m / s ( hydrocarbons ) to 2.5 m / s / hydrogen). Explosions with a slight increase in pressure (atmospheric deflagration) are known as deflagration .

There are two types of explosions in closed systems.

Combustion in a fire can be controlled ( useful fire ), for example in a furnace , a steam boiler ( furnace ), as a campfire , or uncontrolled as a harmful fire in the event of a fire .

During combustion, a substance, the fuel , reacts chemically with oxygen or with another gas. The fuel itself can be solid (e.g. wood , coal ), liquid ( gasoline , ethanol ), becoming liquid ( wax ) or gaseous ( methane gas , natural gas ). Ultimately, before the actual combustion, evaporation or cracking begins, so that the gases produced react with the gaseous oxygen in the air. 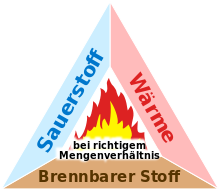 A sufficient amount of combustible material that reacts with the oxidizing agent is required for combustion , usually oxygen (see oxygen index ). In addition, the correct proportions of the combustible substance with the ambient air or the reactive gas and a suitable ignition source are required. A catalyst can reduce the activation energy required to start the chemical reaction. This can accelerate combustion or reduce the energy required for ignition.

The initiation of the burning process, the ignition (supply of activation energy ), is called differently. While generally burns ent will ignite, particularly fire and deflagration can to ignited explosions can ge be ignited ( ignition ). Vapors and gases ignite .

As soon as a small amount of fuel has reacted, the heat released as activation energy causes further fuel to react. In this sense, combustion is a thermal chain reaction . The light released during combustion is emitted by the glowing mass particles. In addition, the temperature typically rises very sharply, which can be used for heating or doing work.

At the moment, hydrocarbons are mostly made to react with the oxygen in the air in heat generation plants . The result is exhaust gas that, in addition to atmospheric nitrogen, mainly contains carbon dioxide (CO 2 ) and water (H 2 O). Depending on the type of combustion, the exhaust gas can contain various other substances, the most common components being carbon monoxide (CO), nitrogen oxides (NO x ) and unburned hydrocarbons. Soot can be produced when hydrocarbons are burned richly (excess fuel) .

The so-called air ratio is required for combustion in air. This is a ratio of the proportions of the ambient air, i.e. oxygen to nitrogen and argon:

In relation to 1 mol of fuel, the proportion of oxygen required for complete combustion is obtained from:

Solving the above equation , one obtains:

, where the lower case letters indicate the number of elements contained in the fuel.

Combustion calculations with the corresponding exhaust gas compositions are particularly efficient for the heat engineering application area using a calculation algorithm according to Werner Boie .

In the case of combustible material, oxidation can only occur when a single atom or molecule of the fuel comes into direct contact with oxygen. The availability of oxygen and its intimate contact with the fuel are therefore decisive for the rate of combustion ( burning rate ). Some extinguishing methods are based on interrupting the oxygen supply (fire blanket, foam, CO 2 extinguishing system).

The supply of oxygen can be achieved by constantly supplying fresh air by blowing into a wood fire. The fireplace is an ideal aid for wood fires . The heated flue gases rise quickly in the narrowing chimney pipe and create a constant negative pressure around the fire. This constantly draws in fresh air. Firestorms and forest fires, which are fanned by winds such as the mistral , are extreme forms .

In order to establish intimate contact, the surface area of ​​the fuel can be increased; gasifying the fuel into a gas is a suitable option. In the case of the candle, the wax melts at the bottom of the wick, rises as a liquid and evaporates at the hot tip. The evaporated wax burns. A vivid example is the flour dust explosion . If some flour is blown into a candle flame, the otherwise incombustible flour becomes flammable due to the atomization and reacts violently. In the gasoline engine , vaporization takes place in the carburettor and the fuel is atomized in the diesel engine . Liquid diesel fuel can hardly be ignited at room temperature. Due to the injection system and a sudden compression with the resulting heating in the combustion chamber, diesel ignites itself and burns.

In some chemical compounds, the “oxidizing agent” (oxygen) and the “material” to be oxidized are contained in the same molecule , as in many explosives . Nitroglycerin with the empirical formula C 3 H 5 N 3 O 9 contains nine oxygen atoms per molecule (in three nitrate and nitric acid ester groups) and therefore more than enough to completely oxidize the carbon and hydrogen atoms contained in the molecule to carbon dioxide and water. The connection is unstable and explosively disintegrates even with slight shocks. The gaseous oxidation products take up many times the original volume and generate a very high pressure, which causes the explosive effect. In the propellants of rocket engines , oxygen is also present in various carrier substances as an oxidizing agent, as this is necessary in the vacuum of space.

The combustion of wood begins with external heating. In the case of wet wood, the temperature increase at around 100 ° C interrupts further heating of the wood before the ignition temperature is reached. Once the water has largely evaporated, the temperature rises and the escaping gases begin to burn. Wood can store approximately its own weight in water and the latent heat is necessary for the evaporation process; so damp or wet wood can hardly be ignited. Dry wood ignites more easily and begins to char from around 150 ° C. This is a pyrolysis of the wood through heat-induced chemical decomposition. Gaseous substances are formed which ignite after mixing with air. The remaining charcoal consists of the degassed wood and consists essentially of carbon, which burns off last.